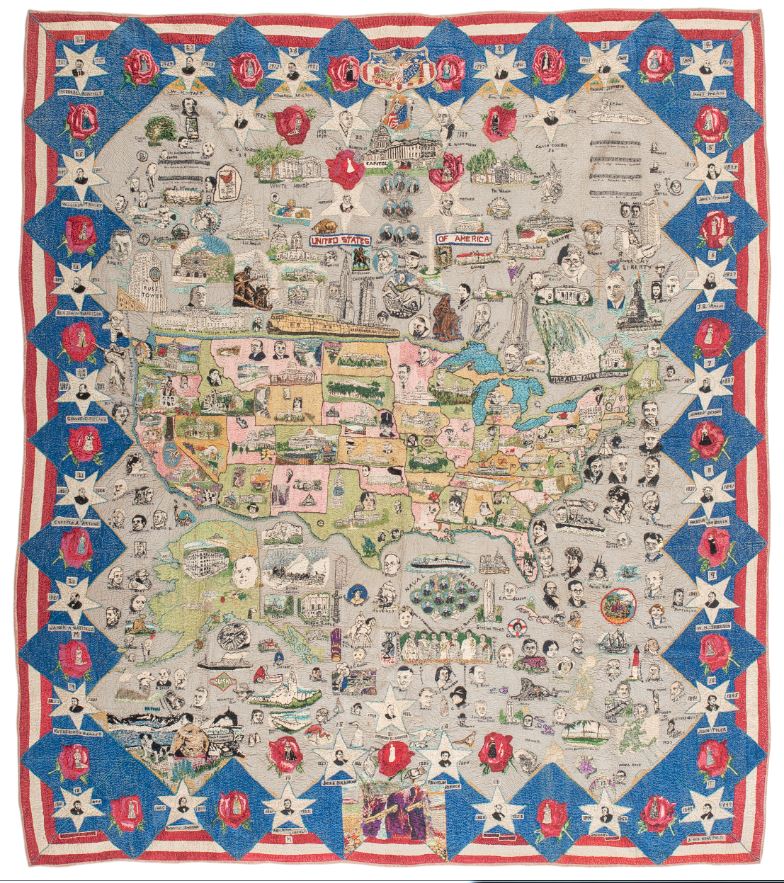 A truly exquisite account of American history will be sold at Cowan's Auctions on February 21. No one would call this a “book.” It is not even a “work on paper,” it being made of cloth. Still, if we look at a book as being a vehicle for transmitting information, and surely that is its primary purpose, this is a totally appropriate item for discussion here. What we have is a quilt, but not just a patchwork of pieces or a beautiful design. This is a quilt which tells the history of America.

The artist and writer of this history was Camille Nixdorf Phelan, a quilter from Oklahoma who appears to have undertaken two massive projects during her lifetime. More about her later. The American History Quilt is signed and dated 1937, which is likely when the work was completed. It measures 73 ¾ x 64 ¾, appropriate for a queen bed, but no buyer will be throwing this on a bed. It belongs on display, somewhere where it can be fully appreciated. While it hearkens back to a difficult time in history – the Great Depression – it is filled with optimism, reflecting a degree of unity among the American people we could only wish for today.

The quilt features a 48-state map of the United States. To this Mrs. Phelan has added Alaska, Hawaii, Cuba and the Philippines. If she was predicting future states, she got 2 out of 4 right. Within most states on the map, Mrs. Phelan has embroidered images – prominent personalities, state capitol buildings, and the state flower. Where space permitted, she added other familiar scenes. Unless you are very familiar with each state's history, and notable personalities of the time, you will find yourself trying to figure out who they all are. The portraits are clear, but most of the people are no longer recognizable to the average person today. For example, a little digging reveals that the lady above the Texas is capitol is “Ma” Ferguson, the second woman governor elected in the U.S. She was elected after her husband, Gov. “Pa” Ferguson, was impeached, convicted, removed from office, and prohibited from ever running again.

The pictures within the map are only the beginning. Another approximately 150 portraits are found surrounding the map. Additionally, over 50 American landmarks are depicted. Each President, from Washington through Franklin Roosevelt, is pictured, their images within a star. The dates of their administrations are also shown. Next to the presidential portraits, within a large rose, are full-length profiles of their first ladies.

Scenic locations and important buildings fill the landscape. Mighty Niagara Falls flows, seemingly onto Annapolis. From Washington, we find the White House and the Capitol. Mount Rushmore and its Presidents make it to the quilt, along with Fort McHenry, inspiration for the Star Spangled Banner. George Washington's Mount Vernon gets a large image, the Chicago Planetarium a small one. New York is represented by the Statue of Liberty, Empire State Building, and Rockefeller Center. The recently opened Mary Atkins Museum of Fine Arts in Kansas City earns a large image, with a modern train barreling towards it from the east. Camille Phelan knew about Devil's Tower long before E.T. did.

The people surrounding the map are a combination of notable historic Americans and those that were of greater fame in the 1930's than they are today. Here, Mrs. Phelan has helped us out by providing names, though some are not entirely clear as she has generally provided only initials for the first name. For example, “J Hill” might be Joe Hill, the legendary labor agitator made famous in song, but the picture looks more like James J. Hill, the railroad tycoon.

If she had some sort of political or other bias, it is not obvious from her selections. There aren't too many political figures beyond the presidents. Alexander Hamilton makes an appearance. So does “J Davis,” whom we believe is Confederate President Jefferson Davis. Lest you think this reveals Mrs. Phelan's sympathies, Harriet Beecher Stowe is also represented. Indeed, a great many women are found, even though it was hard for women to reach high recognition in this era. The artist has tipped her hat to the women's movement by including Susan B. Anthony.

A few notable industrialists are found. John Jacob Astor, America's first super wealthy man is pictured. So too are William Randolph Hearst and John D. Rockefeller. Rockefeller is one of the older looking people on the quilt, but Mrs. Phelan may have been capturing a contemporary image of him. The oil tycoon died in the year the quilt was completed at the age of 97. However, Mrs. Phelan has not forgotten the working man, as she has depicted Cardinal James Gibbons as well. Cardinal Gibbons was known as a strong defender of labor in an era when working people did not have many advocates in places of power, not even within the Church.

Thomas Edison graces the quilt, as well one of the greatest inventors of all time should. So does the great artist of birds, John James Audubon, and mountain man Kit Carson. Bing Crosby, the notable crooner and likely the most popular singer of the time, is here. Clara Barton, the humanitarian nurse who founded the Red Cross is a worthy inclusion. The same goes for Babe Ruth. Less deserving are “Amos and Andy,” stereotypical black characters portrayed on radio by their white creators, but if the 1930's Oklahoman didn't recognize the insensitivity, that wouldn't have made her any different from just about everyone else at the time. Al Jolson, the blackface singer so popular in the 1920's, is also here.

The largest portrait goes to humorist and newspaper columnist Will Rogers. He was America's favorite commentator during the dark days of the Depression, lightening people's load with humor, much of it political, but never offensive. In the midst of his great popularity, Rogers was killed in an airplane crash in Alaska. However, it was more than his humor or tragic ending that would have made Rogers a favorite of Mrs. Phelan. Will Rogers, like Camille Phelan, was an Oklahoman, undoubtedly the state's most famous native son.

Not so prominently displayed, but certainly deserving, is the artist herself. With a small portrait, she has written, “Maker of Nat History Quilt Camille Nixdorf Phelan 1937.”

Some names have been mostly forgotten in the eight decades since this quilt was put together. Edith Johnson was a popular silent film actress not much remembered today. Malcolm Patterson was a Tennessee Governor who caused a scandal when he pardoned the killer of his political rival. Mrs. Thomas J. Preston was the younger second wife of President Grover Cleveland, who remarried after the President's death. Dr. Victor Heiser was credited with saving as many as 2 million lives through inoculation and the sanitary programs he administered, though few remember him today. Alice Roosevelt Longworth, President Theodore Roosevelt's brash Washington socialite daughter, is still better known, but fading from view. How about Judge Camille Kelley? She was a Tennessee Juvenile Court Judge who became famous for her concern for the children who passed through her court, looking more to help the wayward youth than punish them. What Mrs. Phelan couldn't have known is that a dozen years after the quilt was completed, Judge Kelley would resign from office amid accusations she used her court to terminate parents' guardian rights so their children could be sent off to an out-of-state, for-profit adoption agency.

Who was Camille Nixdorf Phelan? Born in Missouri in 1882, Camille Nixdorf married Dr. Joseph Phelan in 1900 and the following year they moved to Oklahoma City. Other than sometimes helping her husband as an unofficial nurse, Mrs. Phelan was a homemaker, and like many other women of her day, enjoyed quilting, embroidery, and other such arts of the needle and thread. She participated in group quilting, but in the 1920's struck out on her own. Around 1927, she decided to take on the project for which she is best known, creating a quilt that displayed the history of Oklahoma. She spent a couple of years researching the project, several more creating it. The result was the Oklahoma Historical Quilt. The quilt was such a masterpiece that it was displayed at the 1933 World's Fair in Chicago. In a ceremony in 1935, Mrs. Phelan presented the quilt to the Oklahoma Historical Society. If she is unknown elsewhere, Mrs. Phelan and her work retain their celebrity among historical circles in her home state.

Shortly after completing the Oklahoma quilt, Mrs. Phelan took on an even more daunting task. She announced that she would create a quilt covering American history. However, the trail quickly turns cold when it comes to learning more about this bigger project. There were no displays or ceremonies, at least none remembered. The second quilt got a brief mention in her obituary when Mrs. Phelan died in 1946, but that's about all. It seems the assumption was that she never completed the project. We now know that she did, but what she did with it during her lifetime, or where it went after she died, is a mystery. How something even more impressive than her honored Oklahoma quilt could just disappear is hard to understand.

It was not until 1983 that the American History Quilt reappeared. It appeared, of all places, at a rural auction in upstate New York. How it made that journey, or where it was all those years, is unknown. The current owner bought it at that auction, and has now decided to put this amazing quilt up for sale. The auction will take place at Cowan's on February 21. We are quite sure you will never encounter anything quite like it again. Cowan's has estimated the price at $15,000 - $25,000, though it is hard to know with something so unique. To lean more about the quilt, the sale, and to see more images, click on this link: www.cowansauctions.com/auctions/item.aspx?id=155301.