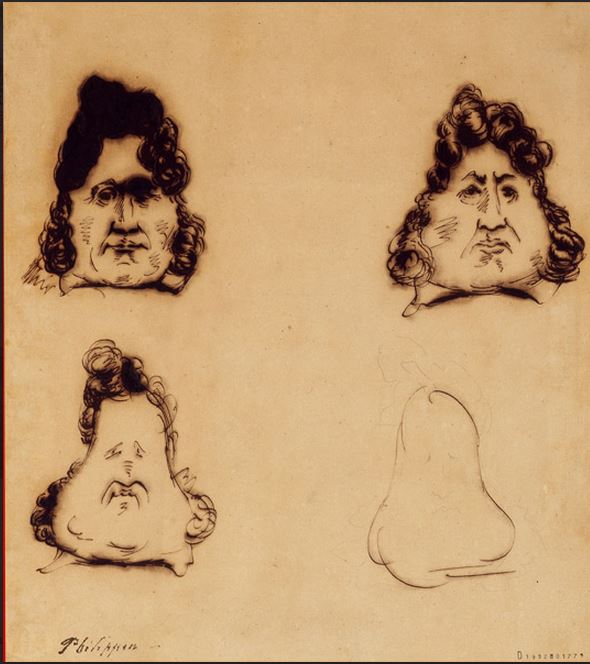 In 1834, while the Government had just passed some new laws to restrict freedom of speech in France, the newspaper La Caricature published the portrait of Louis-Philippe slowly transforming into... a pear. It created a national scandal. But nowadays, the press is agonizing; what is left of its past glory? Well, the terrorists who murdered 12 people in Charlie Hebdo’s headquarters last month proved at least one thing: newspapers still hold huge power!

The terrorist attack, apparently motivated by the wish to revenge Prophet Muhammad mocked in the pages of the satirical magazine Charlie Hebdo (CH), raises many questions. Freedom of speech is one of them; but it goes deeper, as it questions the philosophical position of France on religion at large. Our country has a long tradition of lampooning. After all, the famous placards, or signs, posted all over Paris against Catholicism in 1534 were nothing but pamphlets—and they led many people to the stake. In the 17th century, Cardinal Mazarin suffered many satirical writings that drove the kingdom to the brink of a civil war. Louis XIV, who was less tolerant, had some satirists executed too—they had written against his wife. Yet, forbidden books, pamphlets and lampoons throve continually. During the following century, the Philosophes des Lumières led by Voltaire, used words to fight the establishment, including the mighty Church. And Lord knows their “bullets” of paper hit hard! Then came the Revolution of 1789, and the “bouffeurs de curés”, or priests haters, in the early 20th century, who fought the last battle of the secularization—a newspaper of the time even published, on its front cover, the drawing of a man kicking the ass of a naked Jesus! Nothing new. Thus the French have developed a sort of animosity towards religion—they see it as a way to oppress, and to indoctrinate. Voltaire is not really thoroughly read anymore, but he’s seen as a national hero, and wrongfully identified as a “priest hater.” As far as the famous satire of the “pear” mentioned above is concerned, it is still shown in school—and our kids laugh at it. The Republic has become our idol; as well as secularism. Thus, atheism is quite common around here. And we tend to believe that it is the case in the rest of the world; but it’s not. Slaughtered over satirical drawings mocking the prophet of Islam, the cartoonists of CH are now considered as the true heirs of Voltaire. As a matter of fact, the sales of Treatise Against Intolerance by Voltaire have suddenly risen after the attack.

But is it really the case?

The Holy Link of Society

Voltaire fought against the wrongs done in the name of God, just like in the aforementioned treatise, written to defend a Protestant wrongfully accused of the murder of his son because of his religion; but he didn’t fight against God—or the idea of God. “The misdeeds of the priests can not be blamed on God,” he wrote in one of his poems, Epistle to the author of The Three Impostors. The title is a reference to an anonymous book mocking Moses, Jesus and Muhammad—when it was anonymously reprinted in the 18th century, the priests attributed it at once to Voltaire; but the Philosopher was the first one to condemn this work, and called its author the fourth impostor. “This sublime system to Man is necessary,” he wrote about religion. “It’s the holy link of society / The first stone of the holy equity / The fear of the villain, the hope of the righteous.”

These are not the words of a heretic, though Voltaire obviously didn’t believe in a white giant sitting in a chair on the top of a cloud, looking down at us in discontent. He was too bright and too learnt a man to believe in what he called the fairy tales of the Old Testament either (including the story of Moses or the myth of Adam and Eve); he denounced them to prevent oppression in the name of religion; but he knew about the crucial role played by spirituality: “If God wasn’t existing, we would have to create Him.” To deny God would mean denying “fear and hope” to Man, two essential inner workings of any society. Voltaire longed for the day when «philosophy leading the way, shall bring people to the feet of their common master; when the terrible fanaticism shall be afraid to show itself; when we shall have less dogmas, and more virtues.» But he knew that the vast majority of people weren’t able to understand his subtle view; the world was populated by a majority of simple men who needed simple solutions to complex problems—and it still is. Recently, an angry mob in Pakistan sent a warlike message to France by burning... an Italian flag! They probably don’t even know where to locate France on a world map—and Fox News knows no better. Voltaire took this into consideration. Charlie Hebdo didn’t.