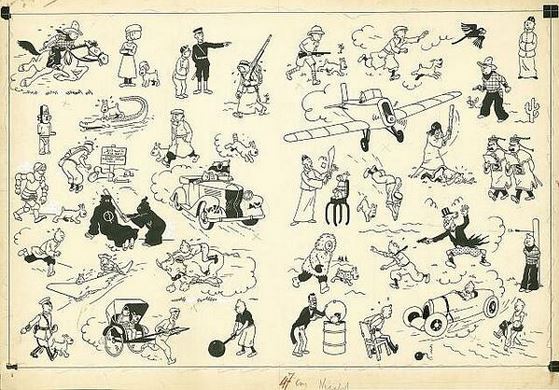 It was the year of Tintin. Thirty-four drawings.

Once again a year has come to an end, meaning it is time to look back at the top 500 prices paid at auction in 2014 in the field of books, maps, manuscripts and ephemera (see end of article for a description of what is included). Once again, there was one eight-digit item at the top that far exceeded anything else. Last year, the Bay Psalm Book went for more than double the second highest priced item. This year, it was more than triple.

More telling about the overall health of the upper end of the market was the price at #500. This year, the low end of the top 500 was more than $10,000 higher than last year, coming in right around $80,000. Those with the means were spending it more freely in 2014. What we also see is a shift in the market. Whereas books once dominated this list, ephemeral material that in the past rarely made it to these lofty prices is now filling the majority of places. One of a kind manuscripts, both beautifully illuminated ones from many centuries ago, and those of historic importance are bringing high prices. Original illustrations used in books are often bringing in prices much greater than the books themselves.

Another form of book, virtually unheard of at the top a few years ago, is now peppered throughout the list. We are talking about comic books, and the original art created for them. They particularly dominate twentieth century material on the list, while books and illuminated manuscripts are strongest among the older works.

This past year, the most appearances were made not by Shakespeare or Washington or names we have seen in the past. An amazing performance was put in by a name it is unlikely most Americans even know. The leader for 2014 is Belgian Georges Remi, better known (but probably not to most Americans) as Hergé. Hergé was a comic book writer and artist, creator of the strip and character Tintin. Hergé's creations fill an incredible 14 places in the Top 500. Most are original artwork for Tintin's comic book adventures. Another frequent visitor to the list is John James Audubon, the result of auctions of individual plates from his Birds of America conducted by the Arader Galleries. Single plates are now so highly valued that they make the Top 500. The Beatles also made numerous appearances. They come in the form of manuscripts - letters, music lyrics, and drafts of a number of writings by John Lennon.

Still, that does not mean there is no room for the great names in literature and history. They are still here where they belong. You will find writers such as Fitzgerald, Carroll, Whitman, Baudelaire, Beckett, Proust, Salinger, the Bronte Sisters, Goethe, Hemingway, Camus, Melville, Potter, Joyce, Doyle, Tolkien, Nabokov, Kerouac, Wilde, Eliot, Austen, Hugo, Roth, Baum, Arthur Miller, Dylan Thomas, Chaucer and Shakespeare.

From the field of music we have Rachmaninov, Dylan, Mozart, the Beatles, and Beethoven.

7. Recuyell of the Histories of Troye, by Raoul Lefevre, circa 1473-74. This history of Troy is noted as the first book printed in English, by translator and printer William Caxton. $1,851,075.

4. The Birds of America, a double elephant folio first edition (1827-38). The Indiana Historical Society copy that was once used in a library, making it a good but not great copy (hence the “cheap” price). Until just over a year ago, another copy of Birds achieved the highest price ever for a printed book at auction. $3,525,000.

2. The first printing of the Torah (or Pentateuch, the first five books of the Bible) in its original language, and the first printed Hebrew book which includes vowels and signs. Contains Rashi's commentaries. Printed in January 1482. $3,871,845.

1. The Rothschild Prayerbook, a Book of Hours circa 1505-10, that is considered a masterpiece of Renaissance manuscript illumination. $13,605,000.

An Explanation of What Is Included in the List

This list covers the top items in books, maps, manuscripts and ephemera (or works on paper), which of necessity requires some parameters. Here is what gets in: books of any kind, maps and manuscripts virtually all, with ephemera, it depends. Most “ephemera” in the works on paper field consists of images – photographs, prints, drawings, paintings. If all of these were included, virtually the entire top 500 would be art, but that's a different field. What is included are images that are in effect textual, that is, they relay information more than beauty. Photographs from the dawn of the discovery of photography, or those which capture historical events are included. Photographs of Lincoln, war, and the suffering of the Depression are in. Photographs by photographic artists are not. Drawings and paintings intended for books are in. Every year, there is always some E. H. Shepard artwork for Winnie-the-Pooh included. Drawings for comic books are included too. Why? Because of the second word in the expression “comic books.” However, Picasso and Warhol, who would dominate the list if included, are not.

Books that are essentially coffee table books, plates of images and little else, still make the cut. They may be art, but they are still books. Put them in a portfolio, and they are out.

Almost everything on the list is composed of paper, but even that is not a certainty. Vellum manuscripts or sheepskin make the cut. Once in awhile, there is something totally different, like cuneiform tablets. They are really just yesterday's manuscripts. If anyone ever discovers the true first edition of the Ten Commandments, it too will make the list.