An Unknown Copy of Shakepeare's First Folio Discovered in France 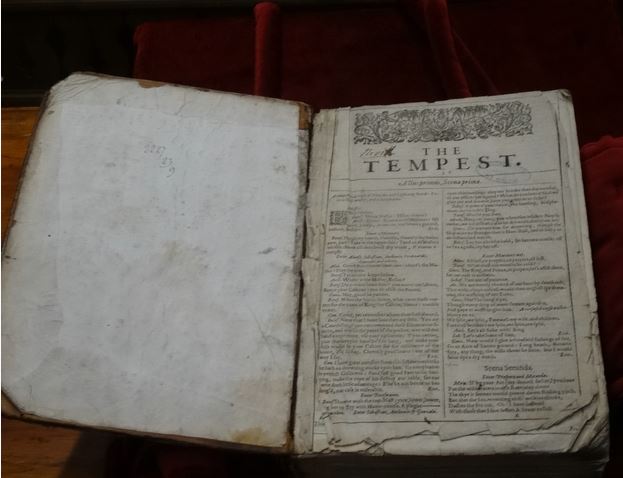 They aren't making old books anymore, but once in awhile, an unknown copy of an important antiquarian text appears. That happened late last year in a small town in northern France when a long forgotten copy of the greatest book in the English language was discovered on its library shelves. Hidden in the collections of the St. Omer public library was a first edition of Mr. William Shakespeares Comedies, Histories, & Tragedies, better known simply as the First Folio. Compiled by a couple of Shakespeare's colleagues who wished to preserve his work, it was published in 1623, seven years after Shakespeare died. At least 18 of the Bard's plays, including MacBeth, would have been lost forever were they not preserved in the First Folio.

The St. Omer copy is less than perfect. It was well-used and is missing the frontispiece and portrait of Shakespeare and some internal pages. The lack of the frontispiece is likely why the book was never recognized as a First Folio, but believed to be an 18th century edition. The book came to light when the librarian was searching for titles to display in an exhibition on links between England and the local region of northern France. Once the possibility that it was a first edition was realized, an American expert was called in to examine the copy, which he quickly recognized was an authentic first. As such, it is one of only two copies of the First Folio known to exist in France. It increases the total number of copies known to survive by one to 233. Around 800 copies are believed to have been printed.

How did this copy come to reside in a small library in France? The answer is that it has been there a long time. However, it has been in St. Omer the town even longer. Its roots trace back to the long gone St. Omers College, which opened three decades before the book was published in 1593. It was a Jesuit school, with the purpose of providing an education to English Catholics. What with the Protestant Reformation in England, and Queen Elizabeth less than positively inclined toward Catholicism, the teaching of the faith was outlawed in England. The Jesuits decided to provide an education for English Catholics in nearby northern France.

The name “Neville” written on the first surviving page of the St. Omer copy has led to two possible explanations of how it came to be a part of the Jesuit library. It may have belonged to Fr. Edmund Neville, a Jesuit priest who taught at the college in the 1630's. Another possibility is that it was brought to the college by Edward Scarisbrick, scion of an English Catholic family who attended the college in 1650 and used the pseudonym “Neville.”

A century later, tensions arose between the government of France and the Jesuits. In 1762, the college closed in St. Omer, moving to the Low Countries. Two years later, the Jesuits were expelled from France. The college moved again in 1794, this time to Lancashire, England, where it survives to this day as Stonyhurst College. Interestingly, they have their own First Folio, given to the college in the 19th century.

The old St. Omer college took much of its library with it when it moved from France, but the First Folio was left behind. It is highly annotated, along with being in somewhat rough condition. Plays were regularly performed at the college, and this was evidently a working copy, a relatively new book at the time. It would not have had historic significance yet when being used to perform plays by the English students, and such significance was obviously not appreciated when the college moved, not surprising for a rough copy missing its title page.

The existence of this copy in a Jesuit college has again raised the question of Shakespeare's religion. Some believe he was Catholic, though hiding his faith for political reasons. Of course, some people don't even believe Shakespeare wrote his own plays. The existence of a copy of his plays at least a decade after his death at a school for English students who liked to perform plays is hardly conclusive, even if it was a Catholic college, though it may spur more speculation.