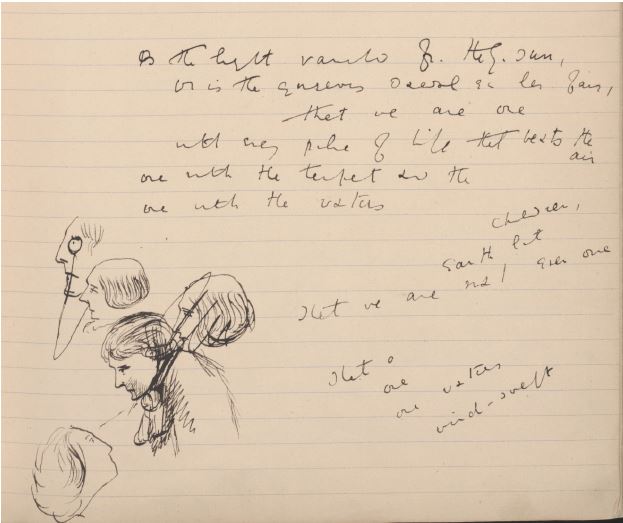 From Oscar Wilde's notebook, circa 1880.

The Rosenbach will be exhibiting some newly discovered works of Irish author-playwright-poet Oscar Wilde opening on January 23. Now officially the Rosenbach of the Free Library of Philadelphia, the material placed on display has been available to researchers there in the past, but their significance, or the fact that they were unpublished, was unknown. Those who appreciate the late 19th century wit, aesthete, and writer, whose following remains widespread today over a century after his death*, will welcome this opportunity. New material from Oscar Wilde, naturally enough, does not come along very often anymore.

The most significant find is a notebook of Wilde's poetry, including some drawings he made from around 1880. This notebook is fascinating because it comes from so early in his career. Wilde is best known today for his writings, particularly his plays, written during the 1890's. His earlier works are not as well remembered. His reputation for writing then was nothing like what it would become in that last decade of the century, although he was a popular figure based on his flamboyant personality. People liked him even if the critics were not yet impressed.

In 1880, Wilde turned 26 years of age. He had graduated from Oxford two years earlier, and had some poems published by then in periodicals. In 1881, Wilde published his first book, Poems, a collection of his poetry. This coincides with the timing of the notebook, which includes drafts and early versions of his verses, accompanied by Wilde's sketches. Wilde's Poems would prove to be fairly popular, even if critics were more subdued and he was accused of plagiarizing some of the material. Still, it was an introduction, and Wilde was now developing a reputation as a representative of the aesthetic movement, a philosophy of art and writing that held that beauty is what matters most, not the underlying message.

It was his voice for this movement, his speaking ability, and personal flair that lead Wilde to one of two visits he made to America. The first was by far his longest, and he spent almost all of 1882 touring the United States, giving well-attended lectures. In the days before television and radio, you could draw large crowds to talks by those who had a way with words, which often meant writers. Flashy dress and an engaging personality helped. Wilde did not disappoint his American audience. One of his most notable stops on his American tour came just across the river from Philadelphia, in Camden, New Jersey, where he had a private visit at the home of his boyhood idol, 61-year-old Walt Whitman.

Another important find is an interim version of Wilde's Salome, a missing link, so to speak. It has long been speculated that there must be a version in between the original manuscript, already housed at the Rosenbach, and the first French edition (Wilde wrote the play in French). There is, and it has been under their noses all along. Also on display is a draft part of Wilde's work from the other end of his career – his last published item, The Ballad of Reading Gaol, published in 1898. It contains previously unknown variations. Commenting on these finds, Wilde scholar Mark Samuels Lasner noted, “Virtually all of Wilde’s manuscripts have been published; these have not. It would be hard to overemphasize their importance.”

The exhibition also includes material from other public and private Wilde collections. Rosenbach Curator and Director of Special Collections Judith Guston explained, “By presenting these works together for perhaps the very first time since their creation, we hope to share with the public a new understanding of Wilde’s meaning and process that comes to light only when we see the true relationship between and among the objects.”

The exhibition, Everything is Going On Brilliantly: Oscar Wilde and Philadelphia, continues from January 23 until April 26, 2015.

*As an irrelevant aside, an unofficial list of verified survivors shows there are 13 remaining living people whose lives overlapped with that of Oscar Wilde, none old enough to remember him.