What Can a Life of Book Theft Lead to Next? 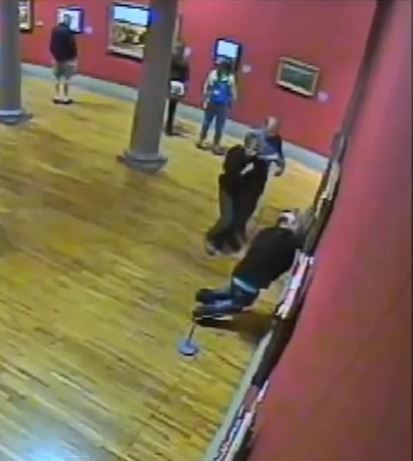 Andrew Shannon falls to the ground shortly after punching hole in Monet painting.

They say that bad things like cigarettes and alcohol can lead to habits much worse, like hard drugs. How about book theft – can that lead to something even more extreme? Here is a strange case that makes you wonder.

Andrew Shannon, age 50, of Dublin, Ireland, has a long record of crime. He has been stealing things in many places for many years. Antiques have been his specialty, which introduced him to the world of books. Mr. Shannon does not have a great deal of knowledge about books. It seems to be limited to if they are old and attractive, and come from some place whose owner has lots of money, they must be valuable. And so he would take them, along with whatever other old and likely valuable items he could find.

He came under particular notoriety a few years back when he visited England. He stopped at six castles or other luxurious homes open to the public. He left with a few souvenirs. There were paintings, ornaments, porcelain vases, and figurines in his selections. And then there were the works on paper – books, maps, and prints. If it looked good, he took it. He reportedly had at least 57 books, and at one point tried to pawn some off on an English auction house. Most were not enormously valuable, but perhaps worth hundreds of dollars. One was inscribed by the author “To the Right Honourable Baroness Spencer-Churchill of Chartwell, the Great Consort of Sir Winston Churchill.” There was an 1850 copy of an old Roman text, bound in red leather, with the inscription, “The Duke of Leinster with Lord Sanderland’s Compliments.” A copy of The Wild Harp by Katherine Tynan was inscribed “To Lady Glenconner.” The dates of the books ranged from 1571-1962. There was a painting of more significant value, in the tens of thousands.

He finally got caught sneaking around the yard of one of these large estates. Shannon tried to explain he was looking for a bathroom, but it is hard to explain why you need to have items belonging to the home stuffed under your clothing in order to look for a bathroom. The explanation proved even harder when police discovered the GPS system in his car was programmed for six different fine houses in England, and they all discovered items missing. Mr. Shannon was sent for awhile to a large house himself, a communal home, one not quite so luxurious.

All told, it is reported that Andrew Shannon has at least 48 prior convictions in various jurisdictions on his record. Whatever his punishments have been, there is one thing we can say they were not – a deterrent. Evidently, Mr. Shannon was not pleased by the treatment he received from law enforcement authorities over the years. And, this is what leads to the issue of petty faults leading to much larger ones. Shannon has just been convicted of another crime, but it is one on a much different scale. Surprisingly, it was not one designed to give him that one big killing on which he could retire the rest of his life. Instead, it appears to be an act of revenge, a fit of pique, an attempt to get back at the state in a way that benefited him not at all.

On June 29, 2012, Andrew Shannon walked in to the National Gallery of Ireland in Dublin. He walked around, stopping to take a look at the painting The Taking of Christ by Caravaggio, painted in 1602. He walked on to a painting referred to as Argenteuil Basin with a Single Sail Boat. It was painted by Claude Monet in 1874. He was a founder of the impressionist movement of painting, which began in the late 19th century. This particular painting is valued at something in the $10 - $15 million range. After briefly examining the Monet painting, Shannon moved on, but returned a short time later. Then, he did the unthinkable. He punched a hole though the $10 million-plus painting. Shannon then immediately fell to the ground, complaining of heart troubles.

Mr. Shannon has complained of serious heart problems in the past. His doctor testified that he had such a problem, with serious arterial blockage, though it appears he may have used this issue in the past to gain sympathy. In this case, he claimed he was felled by his heart, which caused him to fall into the painting. The jury did not believe him. Nor did the witnesses who were in view of the painting on that day. They described the blow as deliberate, saying he lunged at the painting and hit it with his fist like a hammer. The point of impact was above his eye level, not something to be expected of an accidental fall. A surgeon testified that a year after this incident, Shannon underwent a quadruple bypass, with several blood vessels having 90% blockage, and one total. However, he also testified that only about 1% of patients with Shannon's condition would have such dizzy spells, and if they fell, they would be unlikely to get back up as quickly as did the suspect. The doctor acknowledged this was a bit “inconsistent.” A paramedic who arrived found no issues with his vital signs. It also was not helpful to his case that Shannon was carrying a can of paint stripper with him at the time. He didn't use it, but this is not something one with innocent intentions usually brings into a gallery of paintings. Finally, there was a surveillance camera video of the event, which obviously did not help Shannon's cause in the jury's eyes.

The jury found him guilty. The painting has since been restored as well as possible and placed under glass. We are still left wondering, if authorities had taken his earlier thefts of books and other antiques more seriously, might this destructive act have been prevented? Certainly they had a chance. Forty-eight convictions going back to the 1980's is kind of a warning signal that the man might strike again. Those who do wrong certainly should be given a second chance, but a 49th chance? Shannon was sentenced to five years in jail. He already had spent most of the past couple of years there awaiting trial. Since he will not have to spend the final 15 months of his sentence behind bars, he will be eligible for parole in another year. However, he will not be allowed inside of any galleries during those 15 months. Whew. Then what can we expect? Will Andrew Shannon become a model citizen, or will he go for number 50? Fool me once, shame on you; fool me 49 times....