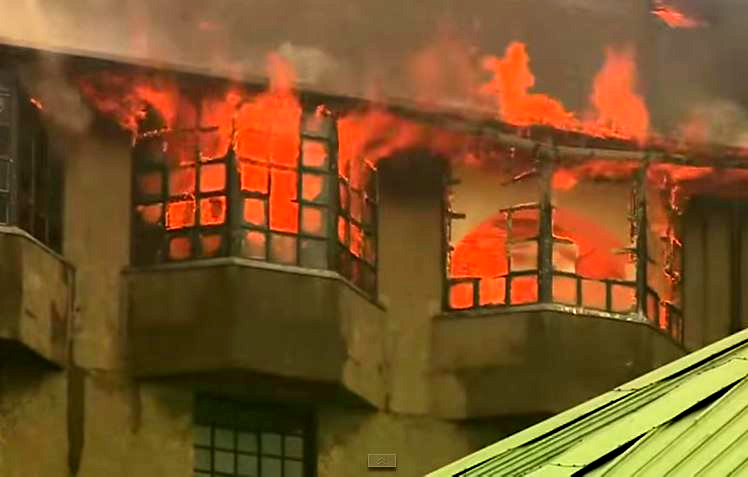 Fire rages through Glasgow School of Art last May.

An unusual archeological dig is taking in place in Glasgow, Scotland, for old books. An archeological search for books makes one think they are looking for some ancient stone tablets or cave drawings, something from thousands of years ago. That is not the case here. While some of these books may be centuries old, some are far more recent, and the ruins being excavated are not ancient. Just a few months ago, they were a vibrant, active library.

The ruins being excavating are those of the Mackintosh Library at the Glasgow School of Art. A terrible fire raced through the historic structure last May, turning a century-old Art Nouveau masterpiece into not much more than a pile of ashes. Along with the building went much of the students' work, the furniture, and, naturally enough, its books. They ended up in a pile of ash and rubble inside the still standing walls of the otherwise destroyed structure.

That would seem to have been the end of the books, but now, six months later, forensic archeologists have undertaken the task of sifting through the debris to see what might be recovered. The firm Kirkdale Archeology, which specializes in various historic projects including archeological excavations, is going through the painstaking task of sifting through the ruins. It turns out that lying beneath what appears to be little more than cinders, many items, even those readily subject to fire, are actually preserved. Other debris may have fallen on them, protecting them from the flames. This doesn't mean there won't be damage – heat, water, being thrown around and left for months in obviously less than ideal conditions don't make for books in “fine” condition. Nonetheless, it is expected that some will be found to be salvageable, and for books old and rare, well, we know they aren't making them anymore. They may be irreplaceable.

The effort will be very much like an archeological dig on a site from antiquity. An area perhaps a yard square is lifted in increments of around 10 inches deep. These are removed to a site where they can be carefully examined, and hopefully, artifacts recovered. In the case of books, it is believed the most likely location for those that can be recovered is near the bottom, where smoldering may have been less. Those that look hopeful will be frozen, to prevent mold, and then taken for restoration if this is possible.

Meanwhile, fire investigators have now come to a conclusion as to what caused the fire. A student had set up foam paneling for an exhibit. He or she was using a foam aerosol spray to fill in gaps in the paneling. Meanwhile, a projector was on in front of it. The propellant gasses in the aerosol container were highly inflammable. They were sucked into the projector by the cooling fan and ignited by the projector's heat. The foam paneling itself was quickly ignited. A staff member tried to put out the fire with an extinguisher, but was unsuccessful. The old air vent system in the building quickly spread flames around the structure, and wooden beams behind the walls were ignited. A new fire suppression system was in the process of being installed, but was not yet operational. The aerosol spray foam is prohibited from use in the library by its rules, but evidently the student was unaware of this. As with so many fires, it was a combination of factors which came together for a brief moment that resulted in this terrible fire and sad loss.