Seeking Collectible Editions from a Long Time Ago in a Galaxy Far, Far Away 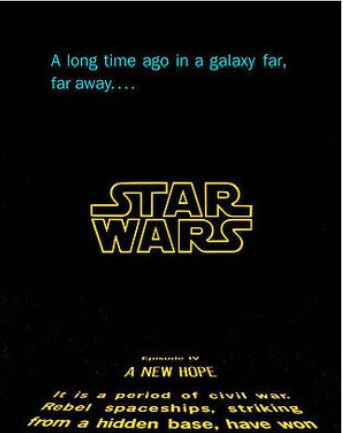 Screenshot of the Star Wars crawl.

The first movie begins with a screen crawl in medias res with Episode IV and in a mythical time and place, classically the locus for the shaman’s struggle for self-realization, growth and unification with the infinite:

It is a period of civil war. Rebel
spaceships, striking from a hidden
base, have won their first victory
against the evil Galactic Empire.

During the battle, rebel spies managed
to steal secret plans to the Empire's
ultimate weapon, the DEATH STAR, an
armored space station with enough
power to destroy an entire planet.

Pursued by the Empire's sinister agents,
Princess Leia races home aboard her
starship, custodian of the stolen plans
that can save her people and restore
freedom to the galaxy....

The release of books based on the Star Wars films, however, is more like a journey into chaos then a classical literary study of the battle between Good and Evil.

The brilliant and wildly successful George Lucas, Star Wars’ originator, is first and foremost a filmmaker, not a publisher. The story imagined by Lucas was not originally a book, but first a story idea and then a screen play. The chronological release of Star Wars-related products, including the books, does not appear to have been done with any purpose other than to get as many products out as soon as possible.

A book publisher would have typically released a signed/limited edition first, then a trade hardcover, then a mass market paperback, either in conjunction with or after the release of the movie. But this did not happen with Star Wars.

The film was released in 1977. However, seven months before the film’s release, a mass market paperback edition appeared, written by Alan Dean Foster from Lucas’ screen play. Published by Ballantine, this book had 220 pp., a $1.50 cover price and a cover by Ralph McQuarrie. “First edition, December 1976” is on the copyright page.