The Greatest Book Collector Dies at 100 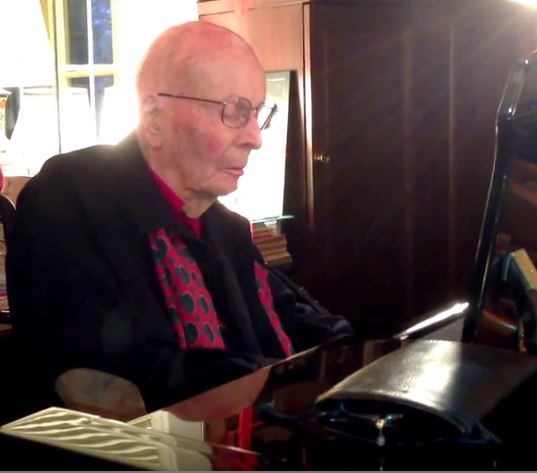 William Scheide plays the piano on his 100th birthday (from YouTube).

The owner of what must have been the greatest private book collection in the world has died at the age of 100. William Scheide of Princeton, New Jersey, died on November 14, 2014. He celebrated his centenary in January, and remained active until his passing. Mr. Scheide's collection was begun by his grandfather, continued by his father, and reached its penultimate achievement only a few years ago. It seems unimaginable that anyone will ever be able to build a comparable private collection again, though one never knows. So few copies of the greatest books are even available any longer in private hands, and Mr. Scheide's collection now too will go to an institution.

His most notable collecting accomplishment occurred in 2002 when then 88-year-old William Hurd Scheide completed a quartet of the first four bibles ever printed. Yes, that does mean that Mr. Scheide owned a Gutenberg Bible. He also owned a copy of what is known as the “36-Line Bible” printed in Bamberg in 1461 and the beautiful “1462 Bible,” printed in Mainz (like the Gutenberg) by Johann Fust and Peter Schoeffer. The missing piece, until 2002, was the Mentelin Bible, printed by Johann Mentelin in Strasbourg in 1460. It is rarer than a Gutenberg, with only 28 copies known to exist. The copy purchased by Mr. Scheide had been unknown for 150 years when it resurfaced in 2002.

Just how remarkable this collecting feat was can be seen by the fact that only two other collectors have ever owned all of the first four bibles before. The first was King George III, America's last colonial ruler. He managed to put together a great bible collection, even while losing America. The other was the Second Earl of Spencer, a major collector of religious works and the first President of England's Roxburghe Club. He died 180 years ago. For reference today, he was the great-great-great-grandfather of Lady Spencer, better known as Princess Diana.

The first four bibles constituted an important, but small part of the Scheide collection. Among the other amazing pieces he owned were a 14th century Magna Carta, a 1493 Columbus letter, a Vespucci letter, an original copy of the Declaration of Independence, and first editions of such important works as Paradise Lost and On the Origin of Species. Naturally enough, you can add a Shakespeare First Folio to that list (along with a second, third, and fourth).

Mr. Scheide had a particular love for music. He was instrumental in starting a music department at his alma mater, Princeton University. His collection included signed manuscripts by Beethoven, Bach and Mozart. He was particularly partial to Bach, having his work published in a Bach literary journal.

William Scheide was, naturally, a very wealthy man. It was family wealth, tracked back to his grandfather. His grandfather was an early associate of John D. Rockefeller. He went on to manage the pipeline business for Rockefeller's Standard Oil. It freed William Scheide to focus on philanthropy through his life. Though possessed of a somewhat irascible personality, he was devoted to helping people who did not grow up with the advantages he enjoyed. He was particularly known for his support of Civil Rights, being a longtime generous donor to the NAACP, and one of the major financial supporters of the Brown vs. Board of Education lawsuit in which the U. S. Supreme Court desegregated the schools in 1954. He continued through life to support political candidates who were focused on helping the needy, rather than those who sought to reduce taxes on the wealthy, though that would certainly have been in his own best financial interests.

Mr. Scheide's book collection was begun by his grandfather after the latter retired from Standard Oil. His father continued the collection, and then William jumped in enthusiastically to build it to new heights. Over half a century ago, Mr. Scheide decided it was no longer something to be kept around the house, so he arranged for Princeton University's library to house the collection. It became the only private book collection to be housed in an institutional library. He later had an add-on built to the Princeton library, with their approval, of course, to house his collection. Princeton wasn't loaning out his Gutenberg to students, but the collection was made available to scholars for research. While nothing was officially stated for most of those years, Princeton undoubtedly was hoping Mr. Scheide would one day make an important announcement. That he did a decade ago, when William Scheide said that on his death, his library would be bequeathed to Princeton University. And so, another monumental private collection makes its way to an institutional setting, to be preserved for future generations and scholars forever (but no longer available to the private collector).