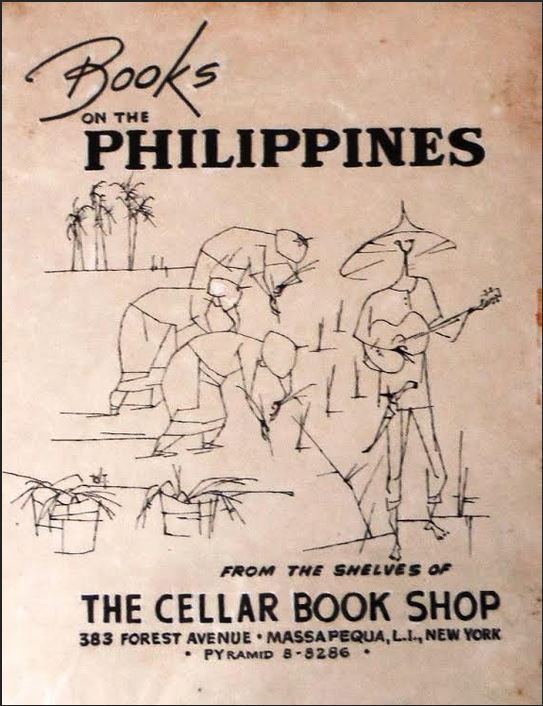 Cover of a 1950s Cellar Book Shop catalog with art by Romeo Tabuena.

My parents had not yet entered the bookselling trade in 1943 the year I was born in Detroit, but all the early warnings signs were there. From the time I was a little girl my father and I would go out most weekends and come home with boxes and bags of books.

We often frequented Goodwill Industries. While I rode up and down in an antique elevator operated by a man with a fascinating hook in place of a hand, my dad labored in the second or third sub-basement in a room lit by a single light bulb dangling from the ceiling. In the dim light he was a tiny figure with books piled high on every side. He never went home empty-handed and Lord knows how we got them on the street car.

By the 1950s my parents moved to Massapequa, a town set in the potato fields of Long Island. During the day my father worked at the US Rubber Company. But almost every other waking moment was devoted to acquiring books, particularly books on the Philippines.

Massapequa was where he and my mother started the Cellar Book Shop (ABAA). It was located in the basement of our house at 383 Forrest Avenue, hence the “Cellar” designation; and so began their fifty year career as specialists in the Philippines and South East Asia.

My father, Morton Jacob “Jock” Netzorg (MJN), was a phenomenal bookman, poker player, and teller of jokes. He was a book buyer without peer. He bought (and bought). He cataloged and wrote the blurbs. To his already massive knowledge of literature, poetry, history, classics, romance languages, philosophy, mathematics and shaggy dog stories he added his own particular love of the Philippines, his home land.

A native of Naga City in Bico, he was born in 1912, the son of American school teacher parents. The family later moved to Manila; for the rest of his life he was a permanent Manila boy in his heart. As a young man he worked as a stevedore on the docks of that city. Despite his ample charm when sufficiently annoyed he had a hot temper and a vocabulary to match.

My mother, Petra F. Netzorg (PFN or “Pete” to almost everyone else), took the books that Jock deposited in the stairwells, on the floor, on the dining room table, in the bathrooms, in the basement and all other available surfaces in numbers that seemed to increase exponentially by the day and she sold them.

While my dad seemed to read almost everything that passed through his hands (even today I find examples of his neat hand writing penciled in the margins of books he gave me), I seldom saw my mother crack a book.

To her books were objects to be shelved, invoiced, sold, and shipped. Though the Cellar Book Shop (CBS) seldom employed more than four full time workers at any given moment, she ran it as if it were General Motors.

My mother, a Jewish refugee from Berlin, was a woman with a mind-of-her-own. The Cellar Book Shop was her baby and enter her office or her basement or her packing room and by God and you were going to do things her way, which was the right way, nay the only way - down to the way you made the corners on the packages, licked the brown paper tape or typed the date on the invoice (using carbon paper and three onion skin carbons).

It was my mother who produced “Cellar Arrivals,” their by-subscription mimeographed list of “current and choice” acquisitions sent out at frequent intervals to those well-heeled customers who demanded the latest and greatest from the Netzorgs.

Even though the shop was technically in the basement, and even though there was a first floor and an upstairs, there was no such thing as an empty space, and every surface was piled high with books or catalogs, or packing supplies, or a sink soaking with the stamps for my father’s stamp collection, or invoices waiting to go out, or back issues of the Antiquarian Bookman (fondly remember by those of us now in the geezer generation as the AB).

My parents had two children. I was the eldest and my David brother came along three years later. From the time we could sit upright and hold a pencil and print letters we were pressed into service. So we couldn’t write so well, that didn’t mean we couldn’t erase the old price codes and put in new identifications lightly in pencil in the upper right hand corner of the front fly.

And a child who can print can certainly soon be taught to catalog, can learn to laboriously spell the name of the author, title, publisher, date, condition, number of pages, and size and write them on a “slip,” which is what we called those little 3” x 5” pieces of paper. Once a slip was produced it stayed in the CBS bookstore archives forever. Each slip recorded how many times a given title appeared and for what price it was purchased and sold and usually the buyer and seller too.

The Netzorgs did not have, perish the thought, an open shop. No we were “By Appointment Only,” and though we moved from Massapequa back to Detroit and in Detroit outgrew the basement and expanded to the second story over an African-American hair salon - all our sales were done by mail, be it catalog, by quotes, or via Cellar Arrivals to the worthy and erudite.

“By appointment” meant you wrote or called in advance. Under no circumstances did you just show up or drop by. It was generally better if you spoke with my father, because frankly, my mother was not too keen on actual live people potentially messing up her carefully organized stock or interrupting her well oiled book selling machine.

Where my father never met a book he didn’t like, my mother's forte was librarians and graduate students. She cultivated them the way other people have prize roses. They started with her as graduate students and they ended as professor emeritus and heads of special collections or the archives of great universities. Cornell and Yale were two names heard frequently around our dinner table.

In those days the meetings of the learned societies were the hunting grounds of book dealers and my mother, with her lists of librarians, her German efficiency and her remarkable memory for just who wanted just what, built her reputation on institutional sales and her life-long friendships with academics.

My father, on the other hand, kept his day job until retirement; he eventually became a management consultant at a Big Five accounting firm – the square peg in the round hole.

That in no way interfered with his proclivity for inviting people home for dinner whom he met in the elevators at Rockefeller Center. He also ran one of the liveliest stops on the Underground Railroad for Filipinos visiting the United States. I do not think there was ever a countryman who passed within a hundred miles of Massapequa or Detroit who did not end up down in the basement salivating at the treasures it contained or joining us for a meal.

My childhood memories are filled with the tinkle of ice cubes, the smell of cigarette smoke mixed with bourbon, the babble of a lot of grown up voices, and their legendary annual Fourth of July party. One of our family’s particular friends was the young artist Romeo V. Tabuena who drew the covers to most of the Cellar’s early catalogs. Tabuena went on to become one of the better known artists of the Philippines. But in those days he was a shy young art student eking out a living in NYC and riding the train out to Massapequa for corn-on-the-cob.

(Another well remembered person - who shall remain nameless, was the gentleman who came home with my dad, ate a hearty dinner - and stole his overcoat on the way out.)

The parts I loved about being a dealer’s daughter were accompanying my father on his forays into the countryside, especially in the 50s where his ratty haunts were filled with raunchy comics and other material totally unsuitable for the young adult reader. I of course also liked having a father who had pre-read everything so that no subject could be mentioned (however casually) that my dad did not know exactly what should be read next. Nine times out of ten it was already in the basement.

Talk about spoiled I was (and am) spoiled for life.

The not-so-good parts were the dungeon of the packing room (where my mother also stored her home preserved pickles - so it always smelled of vinegar), cranking the mimeograph and getting that ghastly purple ink all over my hands, face and clothes. I confess to being less than fond of the post office.

I worked at the shop in high school and some of my classmates at Detroit’s Mumford High were also Cellar Book employees. We formed a short-lived union (ruthlessly quashed by management). Our rallying song was “Ay Ay Kali Sud” (Oh How Hard Life Is) and no, we never got so much as a dime raise.

For those of you out in book-land, the children of dealers who wonder as you are hauled from pillar to post if there is any payoff to this involuntary servitude, let me assure you that as strange as it seems it all came in handy. And once you learn it you can not forget it.

I can indeed pack anything and pack it to a very high standard. That is not as good as my brother David, who achieved Hall of Fame status, but my packages can and do survive both trans-Pacific and trans-Atlantic journeys.

The training received at Cellar Book got me other jobs and plenty of them including the Archives of American Art, the Rare Book Room at the University of California at Berkeley, the New York Times Art Department and the The Folklore Center in New York City to name a few.

In 1979 I started my own company (which I had the nerve to name Cellar Book West). That particular affectionate gesture lasted less than a New York minute (Direct quote from PFN – “That is ‘our name’ get your own name.”)

So I called it Prints Pacific, specializing in Hawaii and the Pacific and it’s been going ever since and it’s been a bumpy road at best. At the very beginning I sent my father a copy of my first catalog. He carefully marked it up very lightly in pencil pointing out the spelling, punctuation and grammatical errors appearing in nearly every listing then sent it back to me. Fortunately, the customers weren’t nearly as picky and it rapidly sold out. I’d love to have any of those things back again.

Now it is 2014, and I’m still (however marginally) in the book business. Who knew?

Just so you should have something more tangible than nostalgia after reading this story, here’s how to code your stock so you can remember your buying price. A little gimmick I learned about the age of five.

Pick any word with ten different letters, for example:

A book bought for $4.50 would be coded Erk; while another purchased for

In conclusion, here are two useful precepts I’ll pass along from my parents:

My father’s favorite motto in mock Latin was "Illegitimis non carborundum” - Don’t let the bastards grind you down. While for as long as I can remember the sign over my mother’s desk read: “Bookselling may not make you rich, but you will have a rich life.”

And, lo these many years later, they’re both absolutely true.