Books In The News: It Was the Erebus, and More... 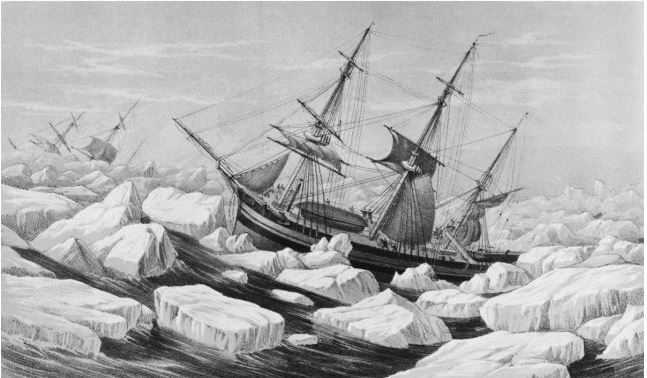 The Erebus and Terror.

It's the Erebus! The recently discovered ship that disappeared in Canadian Arctic waters over a century and a half ago is the Erebus, not its sister ship the Terror. As a pair, there are few ships as legendary as the Erebus and the Terror. Under the command of Sir John Franklin, they set out in 1845 to find the long sought Northwest Passage. Instead, they disappeared. Disappeared until one of the ships was finally discovered on the ocean floor in September. Canadian searchers knew it was one of the two, but at first were unsure as to which. Then, last month, they were able to answer that question.

The Erebus and Terror set off with 129 officers and crew, with orders to traverse the Northwest Passage and return via the Pacific. Those were ambitious instructions as, despite centuries of searching, no one had ever located a northwest passage. The ships were heavily reenforced with iron plating to withstand the ice and fitted with auxiliary steam engines for propulsion. Each had been on Arctic or Antarctic cruises before.

It is unlikely that any voyage ever generated a search like this one. From 1848, when the absence of word from Franklin first raised concerns, until 1859, at least 32 missions were sent to find Franklin. These were mostly search and rescue, though by the end of the period, hope had become slim. While neither the ships nor most of the men were ever found, enough evidence was located to understand their fate. A few bodies, a note, and accounts from a few native Inuit indicated the ships remained trapped in ice for a year and half. Franklin and many others died before the ships were crushed and sank, and the survivors set off on foot, to die of hunger, disease and exposure.

For those who collect travels, no voyage ever generated a collection of literature like this one. Most of the search missions yielded their own accounts. Even after the primary period of the hunt, people conducted searches for Franklin, right up to the Canadian mission this year that finally found one of the ships. Though most did not find out much about Franklin, the wealth of information they brought back about the Arctic comprises much of what we know today about this far northern land. A final chapter to Franklin's story is now close to being written.

A sad but instructive case of violated trust was tried in a Maryland court recently. Julia Jordan runs a bookselling business from her home in Bethesda. She had moved back to this, her childhood home, to help her parents. She soon befriended her neighbor, Christina Wimmel. They talked regularly, walked dogs together, and Ms. Wimmel often visited the Jordan home. Ms. Jordan completely trusted her neighbor, allowing her around the house without keeping a close eye. Most of us probably do this too, but with valuables, including expensive books, you just can't be careless. Sometimes, we don't know our “friends” as well as we think.

For a period of almost a year, Ms. Wimmel was pilfering books from Julia Jordan's home. The latter was unaware. She did not realize anything was amiss until receiving a call from a Pennsylvania bookseller. He had just bought a couple of books on eBay and noticed they were identical to books Ms. Jordan owned. A quick search revealed those books were missing from the Jordan house.

Ms. Jordan obtained the seller's eBay name from the other bookseller and went to the police. They tracked down the dealer's identity and found it to be that of Ms. Jordan's next-door neighbor. Ebay's transaction history showed that she had sold many books belonging to Ms. Jordan. Subpoena in hand, the police searched the Wimmel house. They quickly found more incriminating evidence. They discovered a book belonging to Ms. Jordan in a bedroom closet. They also found postal receipts showing where some of the books were shipped. It did not take long for Christina Wimmel to admit to what she had done.

An appraiser was brought in to value the stolen books. The value given was $33,750. Four books were returned, including one valued at $8,000, but still missing were volumes estimated to be worth $22,310. It was not made clear exactly where those still missing are now located.

Ms. Wimmel apologized for her actions in court and said all the right things about repaying the debt. Her lawyer, who would have been intently defending her integrity had she pleaded not guilty, instead reeled off a litany of psychological issues from which Ms. Wimmel suffers as something of a defense. Among those he claimed were alcoholism, social anxiety, depression, and some illness he described as a “toned-down” form of bipolar disorder. He said she had suffered physical and mental abuse from her mother and an ex-boyfriend and had a long history of stealing from people with whom she had disagreements as a means of getting back. Where would we be without lawyers to defend our honor? It does not appear the judge was terribly moved. He did defer jail time, but on the condition she use it to make restitution - $300 a month with a lump sum of the remainder due October 1, 2016. Otherwise, she could spend six months in jail. Her lawyer said the expectations might not be realistic considering she makes only $17,000 per year, but the judge responded that she could work evenings or weekend to make up the difference.

Scholium Group recently released its financial results for the six-month period ending September 30, 2014. Scholium Group is the publicly traded London company whose primary asset is the bookseller Shapero Rare Books. For Shapero, they reported that sales of material from their own stock was up from the same period a year ago, while gross profit margins also increased. This was attributed to their placing more emphasis on higher quality books. Scholium said that their focus is now on sales during the busy selling season to come and as a result, they have been significantly increasing stock. They valued that inventory at £6.2 million (about $10 million), adding they had made “a number of noteworthy acquisitions.”

They also described the first half of the year as “productive” for Scholium Trading. It turned its first profit. This division works with other dealers to help finance purchases.

Scholium concluded their report with the following outlook: “We look forward to the busy selling season in the second half of the year with optimism, strong levels of quality stock and a firm pipeline of selling opportunities.”