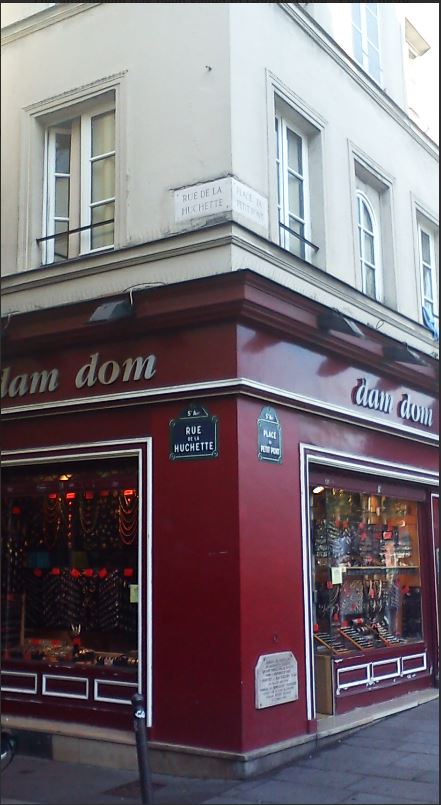 The corner of Rue de la Huchette and Rue du Petit-Pont in Paris (where Tiger's shop once stood).

At the turn of the 19th century, when printing went through major changes, one bookseller made a name for himself by publishing dozens of popular titles. Simple, short and of lower quality, they met the needs of the time, and thus became successful. Meet Mr Tiger, owner of the famous Pilier Littéraire, located at 10 rue du Petit-Pont, in Paris!

I went to Paris the other day, in the Latin Quarter. I reached rue du Petit-Pont, one of the oldest streets of the capital, and then I walked up to the corner of Rue de la Huchette. Here it was... well, here it once was—the small and dark workshop of Christophe-César-Jean-Baptiste Tiger (1759-1825), the famous Pilier Littéraire. It used to stand at number 10, according to the title pages of my books, “at the bottom of rue Saint-Jacques”. But things have changed, and number 10 stands far from the corner of rue de la Huchette—so which of the two corners was the right one? I entered the jewellery store on the right, but the young saleswoman had no idea what I meant by “long ago”. Nobody in the café on the left could help me either, and I couldn’t follow the indications left by Cordelier Delano any further—in 1834, he paid a tribute to the Pilier Littéraire in Le Diable Boiteux à Paris (Stuttgart): “When you enter rue Saint-Jacques, close to the Petit-Pont, you find a huge shop of novelties at the corner of rue de la Huchette. There used to stand the honourable workshop of Mr Tiger, the Pilier Littéraire, the sanctified ground where, from ancient times, were created the double almanac of Liège, the almanac of Paris, of Rouen, and the popular stories of Cartouche and Mandrin.”

These popular books that suddenly flooded the market at the turn of the 19th century became known as peddling books. Printed in a small format (in-18°) and huge quantities on a mediocre paper, they were usually illustrated with an engraved frontispiece, and they were the cornerstones of Mr Tiger’s empire of paper. We don’t know much about Mr Tiger, except that he started in 1786 as a master binder in Paris—he was then based on Place Cambrai. He published his first books at the same time, and claimed to decorate and look after private book collections, and to make covers for every kind of almanac. The French revolution of 1789 abolished all constraints on book printing, and Mr Tiger seized the opportunity. “He established himself as a printer-bookseller as well as a printer of steel engravings,” states the French National Library, “he was also doing type foundry.” He wasn’t the only opportunist at the time, as the amount of booksellers doubled between 1780 and 1800 in Paris.

Mr Tiger specialized in almanacs, annual publications that, apart from a regular calendar, featured various pieces of work such as recipes, riddles or songs. They became the most printed and the most read books of the time, just after the Bible. Cordelier Delanoue had a lot of respect for almanacs—and the people who printed them: “Not far from the former shop of the Pilier Littéraire,” he went on, “we can still see a small and smoky shop, with an almost unreadable old sign: Aux Associés, Demoraine & Thébaud, booksellers. Specialized in almanacs of all kinds, religious, hymns and prayer books. Blessed are these offices! Blessed is Mr Tiger! Blessed is Mr Demoraine! Here, in those mysterious laboratories, the moms and kids of the community, and the nuns (...) come to buy their prayer books, their calendars and their songbooks. (...) Ô Demoraine! Ô Tiger! Duet of athletes! Duet of elders! Eternal joy of small bookshops, and of the Petit-Pont! Your shop, dark and shadowy as it is, shines brighter than all the golden panels of the vain bookshops of the Palais-Royal.” In fact, Delanoue seems to be speaking of the same shop, as the widow Demoraine was the “successor of the famous Tiger of the Pilier Littéraire.” (Emile Morige, 1834). The same Emile Morige stated that she was then printing 180,000 copies a year of the Parisian Astrologue almanac!

The early Tiger editions—before 1800—are hard to spot. We know that he moved to the Collège des Cholets in 1797, before settling at rue du Mont-Hilaire in 1798; then he went to rue Etienne-des-Grès in 1799, came back to Place Cambrai in 1800, to eventually open his bookshop rue du Petit-Pont, n°10, “at the corner of la Huchette, at the bottom of rue Saint-Jacques”, as written on the title pages. By then, his productions become more frequent.

He obtained his licence of bookseller in 1812, but was denied the one of printer in 1811—we know that he complained to the Minister of Justice in April 1811. The free market applied to books had generated too much confusion (and maybe too many pamphlets?) and Napoleon decided to put an end to it in February 1810. To obtain their licence, booksellers had to go through a police investigation, and prove their good morals as well as their loyalty to their country. Anyway, Mr Tiger kept on selling books until he went bankrupt in 1811. But he wasn’t out of business and was certified bookseller again on September 11, 1818. When he died in Paris on April 30, 1825, his licence apparently went to his widow, then to Alexandre-François Selligue, an engineer from Geneva who, in 1829, recorded a patent for a typographic press with a continuous movement, “that can print on both sides, and works with a steam engine.” (Revue Encyclopédique,1821).

Nobody really knows Mr Tiger or the Pilier Littéraire nowadays. After a prosperous period, peddling books were replaced by serialized novels around 1850, and were disregarded as worthless readings. Mr Tiger published short, attractive and efficient books—in a word, profitable. He needed to sell books, so he focused on simple topics. He talked about popular heroes such as Mandrin or Cartouche, he related well-known tragedies (the shipwreck of La Méduse), or contemporary stories (such as the Napoleonic wars). He was an opportunist, who published an ode to Napoleon in 1806, and then The Corsican bandit, or crimes, forfeits and sins of Nicolas Bonaparte, in 1816. In the former, Napoleon is “a God from the mount Olympus”; in the latter, “a man who, thanks to his boldness, his hypocrisy, his forfeits and crimes, has sat on the highest throne of Europe.” As a matter of fact, most of his books were anonymous; even his almanac of Liège, the heart of his empire, was a counterfeit publication of what M. Froment called “the true almanac of Liège printed by Madam Bourguignon,” and which “wasn’t officially distributed in France where it only entered surreptitiously.”(La Police dévoilée depuis la Restauration, 1829).

The same M. Froment reported a curious story involving Mr Tiger. The printer was sitting with one Sieur Henriquez one day, drinking wine at the corner of rue des Saints-Augustins, “talking about the articles they would insert in the next edition of the almanac”, when they saw some turkeys led by a butcher walking on the sidewalk. One of the turkeys was walking very proudly, and Mr Tiger laughed: “This General shall soon lose its life in the middle of its soldiers...” Henriquez, wrote Froment, “noted that this would be a very appropriate article for the almanac.” When the publication came out, a policeman read between the lines, and foretold “the assassination of a General and more than that, a provocation!” Mr Tiger was denounced, and summoned to the police station where a police officer heard him, smiled, and then “politely let him go.”

Mr Tiger was a successful printer, but his books became a cliché. As soon as 1829, the Memoires de Vidocq made an ironical reference to them: “It became clear for the Magistrates that (this) incident (...) was an invention of my agents; so many fancies, more or less bizarre, have been built up around it; and the Plutarchs of the Pilier Littéraire won’t fail to acknowledge them as truthful, if the idea ever comes to the printer Tiger, or to his successor, to add a title to his collection of peddling books: The admirable yet true history, of facts and memorable, extraordinary or surprising adventures of the famous Vidocq; with the portrait of this famous informer.” Tiger’s books somewhat symbolize the impoverishment of printed materials at the time. Nonetheless, certain titles still attract book collectors. Those about Napoleon are very valuable to those who try to know how the emperor was perceived in his own time, for example. And others like the History of Saint-Domingue, or the portraits of the French buccaneers, have become very rare, and quite expensive. Even the almanacs have become quite rare. I have listed the titles of his catalogue that I’ve come across lately. Some are for sale on the Internet right now, and I’ve mentioned their price after the description. Here is a part of what the Pilier Littéraire left to the world.