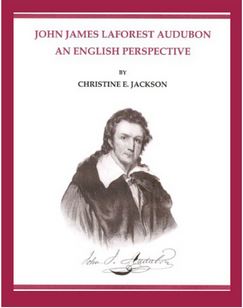 John James Audubon is undoubtedly the best known illustrator of American natural history, its birds in particular. As such, some may be surprised to learn that his success was dependent upon the reception he received in England. While the early response to his drawings was lukewarm in America, it was enthusiastic in England. Without it, America's great ornithologist and artist might well have been consigned to obscurity, a talent unappreciated and lost to history.

Christine E. Jackson, a professional librarian and author of books on ornithological art and illustration, recently published a book entitled John James Audubon: An English Perspective. It illuminates his years in England, locating a publisher, gathering the subscriptions needed to finance his massive undertaking, and supervising the production of the classic first edition of his Birds of America. This massive, double elephant folio book, published in installments, was expensive to produce and expensive to buy. For many years, until last fall's sale of a copy of the Bay Psalm Book, it held the record for the most expensive printed book ever sold at auction, one copy exceeding $11 million. Indeed, it would take a later publication of a smaller, more affordable octavo edition for Audubon to finally make some real money from his amazing creation.

Audubon was born in the French Caribbean, but emigrated to America. He tried his hand at a few things, but art was his strength. His naturalist interests, particularly with America's birds, led him to begin drawing these animals. It became something of an obsession. In the early 1820's, he set about the task of seeking examples of every American bird he could find, sometimes spending months in the wilderness. His aim was to create his great book. However, his project was coolly received in America. One of those who recognized his talent was French ornithologist Charles Lucien Bonaparte, nephew of Napoleon, living in exile in America. He encouraged Audubon to bring his wares to England, which he did in 1826. So begins the era covered by this new book.

Audubon would spend the years from 1826-1839 partly in England, partly in America. His time in England was devoted to producing and promoting his book. His visits to America would enable him to seek out and draw more birds. Ms. Jackson looks at his time in England. It was there that he met some of the most important and influential people of the time, industrialists, professionals, artists, and naturalists. He was taken to philanthropic organizations and met with members of British high society. It enabled him to make his pitch for subscribers, whose financing was essential for the book's production. Along with drumming up business, Audubon spent his time overseeing the book's production, including a crew of illustrators who provided the color to his drawings.

Ms. Jackson's book not only looks in detail at Audubon in England, but at the lives and careers of his English subscribers and friends, often prominent members of British society. This provides a better understanding of the times and Audubon's place in them. Additionally, the book provides information about his wife, Lucy Green Bakewell, and her family. Mrs. Audubon was born and raised in England, emigrating to America in her teens.

The author may be reached at the following email address: cejacksonbirdart@waitrose.com

The Oak Knoll Press has published an account of The Rampant Lions Press. A Narrative Catalogue. It is both a history and a bibliography. The Rampant Lions Press was formed in 1924 by Will Carter. Will was only 12 years old at the time, so it took a bit of time to get really rolling. Carter moved the press to Cambridge, England, in 1934, and in 1936, it published its first book. By 1948, Carter was able to turn the press into a full-time business.

For the next 60 years, Rampant Lions was one of England's most notable fine presses. All of its books were printed by letterpress, handmade paper being the norm. In the 1960's, Will was joined by his son, Sebastian. Together, they continued until Will's passing in 2001 at the age of 88. Sebastian then operated the press alone until 2008, when he retired. Sebastian Carter is the author and compiler of this history of the Rampant Lions Press. It has been divided into the press' four eras: 1924-1941, 1942-1963, 1964-1990, and 1991-2008. Within these eras, it describes all of the 321 books printed by the press. Its files, now housed by the Cambridge University Library, were used to provide the detailed information. The book contains 130 black and white illustrations plus 16 pages in color.