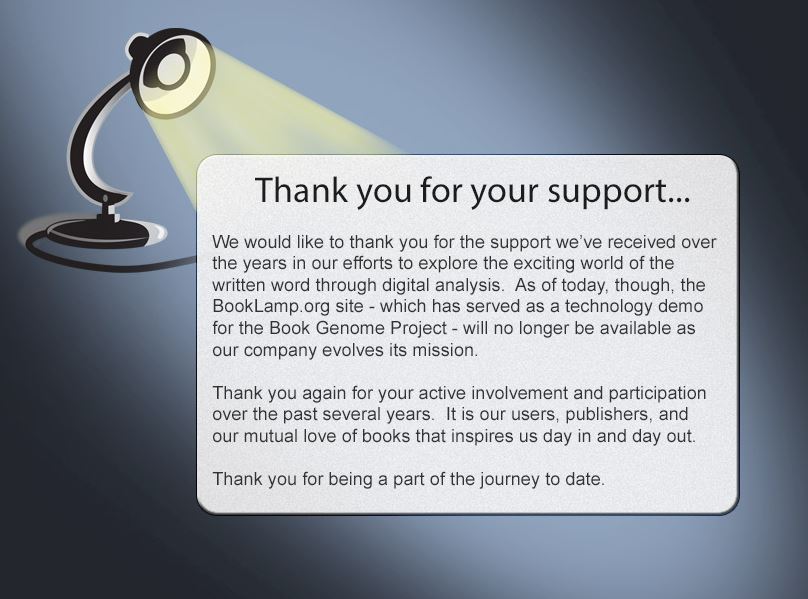 A goodbye message is all that's left of the Booklamp website.

Booklamp, we hardly knew ye. One year ago we wrote about Booklamp (click here). The website was two years old at the time, but for the most part was running under the radar. Its purpose was to help readers find other books they might like based on their favorites. It will help no more, at least for now. The site is gone.

Cry not for its owners. They were paid well. First, a look back at Booklamp and how its software functioned. Most sites that help you find books you might like do so on the basis of recommendations. If you like mystery books, or some other topic, or if you like books by a particular author, here are some others you may enjoy. The recommendations are based on other readers who share your interests.

Not so with Booklamp. It provided some sort of algorithm, applied by a computer, to find other books you might like. What it did was to look at similarities between a book you selected as a favorite and other titles. Similarities would be based on sentence structure, frequent use of similar words, and such. If your favorite book was about dragons, it would find other books that spoke often about dragons. Stylistic similarities are harder to describe or pinpoint, but the software evidently had the capacity to analyze things like that as well.

I gave it a spin at the time. I put in Uncle Tom's Cabin as my selection. How good were the matches? I don't know. I had never heard of any of them save one. Since I did not write them down, it's too late for me to perform a test. The one match I did recognize was Zorba the Greek. Zorba the Greek? Was he like Uncle Tom? Was Uncle Tom an Uncle Zorba? I really have no idea. I never read Zorba the Greek, though I did see the movie. It doesn't seem to me that Zorba was particularly like Uncle Tom, but maybe that was more Anthony Quinn than Zorba the book. Basically, I suspect the software still needed some work, but did serve to open readers' eyes to some new possibilities they never before considered.

Booklamp never reached a mass audience. Its website traffic was not high. However, they did reach the one or two people who mattered most. They caught the attention of developers at Apple, Inc. Someone at Apple was evidently intrigued by the software, and Apple has lots of money if it likes something, last count well over $150 billion. Apple bought the company (or at least its software). Apple is notoriously secretive. They acknowledged the purchase, but as usual, declined to elaborate. They stated their usual mantra of not discussing plans or purposes of their purchases. They did not give a price, but it has been reported that it was in the $10 - $15 million range. That is very small for an Apple purchase, but not bad for the developers of a site that was just three years old.

Apple obviously does not intend to run it as the business it previously was. The site now displays a brief message, saying it “...will no longer be available as our company evolves its mission.” Our best guess is it will eventually return as a service of Apple, either something exclusively available to owners of Apple hardware, or as part of a service like iTunes. There may be an app for that. Alternatively, if Apple does not think they can make something useful of the software, it may be abandoned. They do that with some companies they buy. Apple does not put out products it does not believe to be outstanding, and has no problem eating $15 million which, to them, is not even pocket change. We will just have to wait to see whether the light is once again turned on at Booklamp, or has simply gone dark.