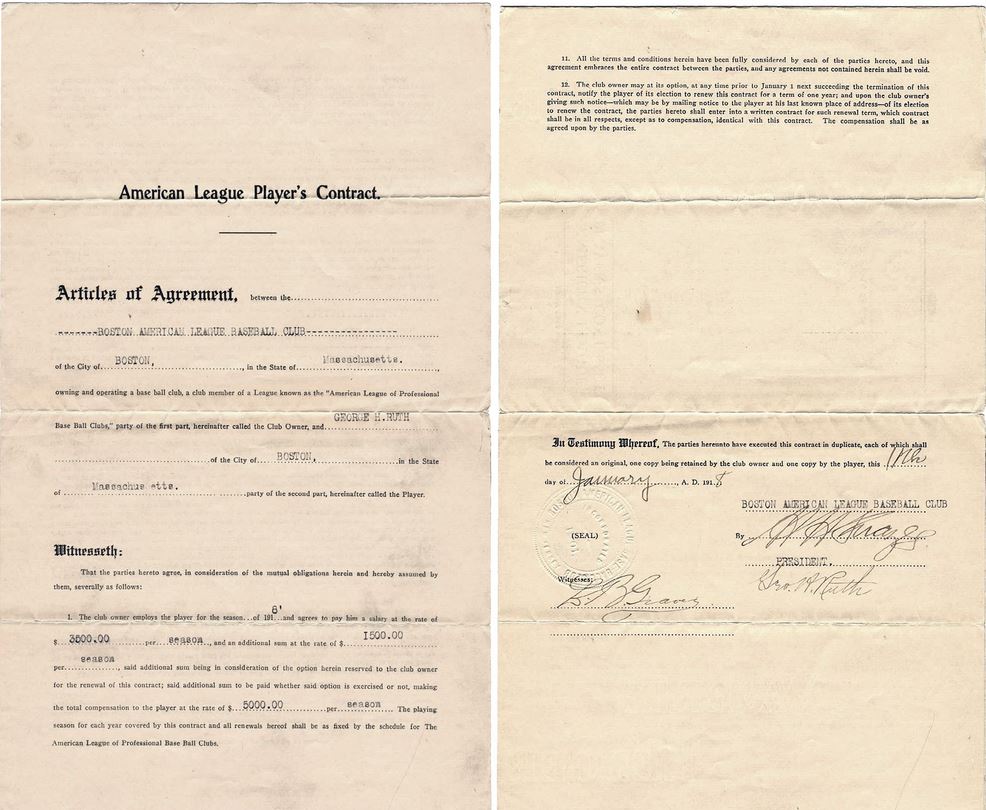 This is not the typical “work on paper.” Then again, the “Babe” was not an ordinary man. The most expensive sports contract ever sold hit the block at Goldin Auctions last month. It was the first to cross the $1 million barrier.

George Herman “Babe” Ruth is undoubtedly the most famous baseball player of all time, and most likely the greatest as well. No one dominated his time like Ruth. After an inauspicious start for the Boston Red Sox in 1914, Ruth quickly developed into one of the best pitchers in the game. While running up seasons with 23 and 24 wins, Ruth showed from his number 9 slot in the batting order that he could also pop the ball. In an era of small ball, when few home runs were hit, Ruth could knock the ball out of the park. It created a dilemma. Ruth was one of the best pitchers in the game. He still holds the record for the longest World Series complete game victory – 14 innings. Still, a pitcher only plays once every five days, and his bat was needed the other four.

It was with this background that Babe Ruth signed the contract that set the auction record last month. With 24 wins the previous season and dreams of playing in the field too, Ruth, never one to underestimate his value, demanded a large raise. The previous season he was paid $3,500. He was not about to take that again. The Red Sox had no choice but to compromise. They agreed to pay the Babe $5,000. Yes, his contract to play the 1918 season for $5,000 sold for $1,028,500.

The rest is history, most well known. In 1918 Ruth would hit 11 home runs, enough to tie for the major league lead, while still winning 13 games. The Red Sox would win the World Series for the third time in four years. They wouldn't win another for 86 years. Ruth would double his salary in 1919 to $10,000, but the Red Sox became a miserable team. Meanwhile, owner Harry Frazee needed money. Some said it was to promote a Broadway play he produced, although it may have been other financial needs, including paying for his purchase of the Sox a few years earlier. Whatever the reason, Frazee sold Ruth to the New York Yankees before the 1920 season for $100,000. Ruth would go on to be the greatest baseball player, and the Yankees the winningest baseball team, switching places with the humbled Red Sox. It was the “Curse of the Bambino,” though it might more accurately have been described as the Curse of Harry Frazee.

The contract was signed by “Geo H. Ruth,” Boston's least liked owner, “H. H. Frazee,” and American League President Ban Johnson. There were three copies, each signer getting one. This was Ruth's copy and the only one known to survive. It is also the earliest known surviving Ruth contract, and the last one for fewer than five figures. Most notably, it represents Ruth's transition season, from great pitcher to even greater hitter, the best there ever was.

Scholium Group, parent of English antiquarian bookseller Shapero Rare Books, recently announced its results for the fiscal year ending March 31. Scholium also owns art bookshop South Kensington and hotel library provider Ultimate Library, but Shapero is its largest business. Scholium now openly reports its results since going public earlier this year. Revenue rose by 13% from the previous year, though the company incurred a small loss, compared to a profit last year. The reason was administrative expenses, particularly in relation to its public offering. Revenue rose from £5.9 million to £6.7 million. The loss was £59,000. The company also declared a dividend of one pence per share. That equals 1% of its initial offering price.

The size of Apple Inc.'s settlement in the eBook price-fixing case has now been established. However, it remains to be seen whether Apple will have to pay this settlement. Apple was earlier found guilty of conspiring with six book publishers to jointly set the prices at which their eBooks could be sold. That is not legal, and the publishers all agreed to settlements before trial. Apple, however, persisted in its defense that they have done no wrong, and when they lost in court, Apple promptly appealed. That is where we now stand. However, Apple has also reached an agreement with the various attorneys general as to the amount they will have to pay should their appeal be unsuccessful. That number has now been revealed.

Apple has agreed to pay $450 million in damages if it loses on appeal. Most would go to consumers. The total is almost 50% more than the settlements reached with the six publishers combined. Presumably, consumers could expect several more dollars per qualifying eBook from the six publishers purchased roughly during the 2010-2012 time period. A partial overturning of the earlier verdict would lead to a smaller settlement - $70 million – while a complete overturning of that verdict would result in Apple being liable for nothing. The potential cost to Apple is a significant sum of money, but there will be no need to cry for Apple if they lose. With $150 billion in the bank, $450 million is but a drop in the bucket.