Unexpected Archive of Letters from Reclusive Author J. D. Salinger to be Sold at Christie's 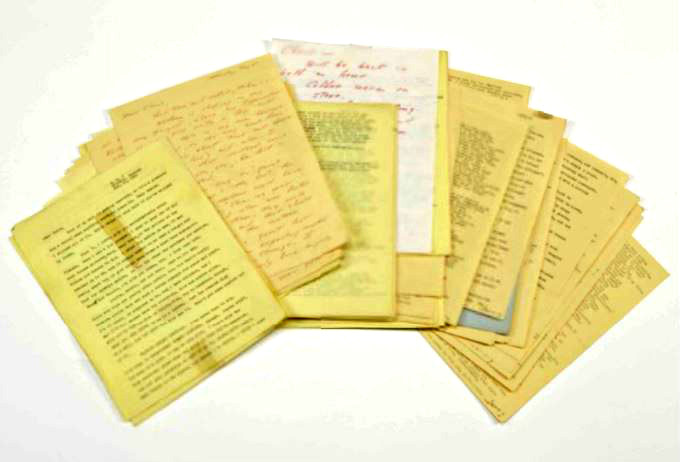 In 1951, obscure short story writer J. D. Salinger burst upon the public consciousness with his tale of youth alienation, Catcher in the Rye. It struck a nerve. The book became a must read for every rebellious young person, at least of every such young person who read. Even many who did not read made it an exception. Some schools banned it, and its controversial reputation, of course, made it all the more interesting to young people. This was the 1950's. Bad language and sexual innuendo were a ticket straight to Hell back then, but the young recognized the journey was fun. Salinger was their favorite author.

However, as Salinger's fame spread, Salinger himself withdrew. No one can ever understand exactly what goes on in another's mind, but Salinger despised the attention. He became one of writing's greatest recluses. He authored only a few more books, and those were anthologies of various stories, not full novels like Catcher. Even that stopped in the early 1960's, though Salinger continued to write material. He just didn't publish it any more. He married, moved to New Hampshire, and divorced, both from his wife and society. He gave virtually no interviews from shortly after the publication of Catcher until the end of his life, almost 60 years later in 2010. The few he did, such as to a high school newspaper editor, ended badly for him.

It is into this background that a surprising collection of letters is coming up for sale at Christies in New York on June 19. It is a collection of 41 letters, 66 pages and over 2,000 words, written by Salinger to Christine Smith of Central Pennsylvania from 1966-1976. It turns out the reclusive Salinger did have some friends, and while most of his contact with them may have been through letters, there were in-person visits as well. Salinger was not an island after all. He just limited himself to a very small corner of the continent.

Ms. Smith was an avid reader and letter writer. She was also just 15 years old when she first wrote to “Jerry.” She wrote to writers, actors, even former Presidents. Salinger would seem the least likely to reply, but he did. Ms. Smith couldn't have known it, but her timing was likely ideal.

The year 1966, when she first wrote him, was also the year Salinger separated from his wife. We also know from a book about Salinger by author Joyce Maynard, who lived with Salinger for a year when she was 18 and he 53, that Salinger was attracted to much younger women, and those relationships began through exchanges of letters. Salinger, naturally enough, was not into barhopping or the dating scene. There aren't many ways for a recluse to meet girls.

We should note here that Ms. Smith has made it quite clear that she did not have a romantic relationship with Salinger, 32 years her senior. She did once spend 5 days with the writer in his New Hampshire home, but his children were present, and they spent the time talking books and movies, the latter being a love of Salinger. She was 19 then, and though they never met again, they corresponded for another 6 years. Ms. Smith kept her friendship with Salinger private, outside of family and a few close friends, until after the author died in 2010. In an article revealing her relationship, published in the Pittsburgh Post-Gazette after his death, Ms. Smith states clearly, “Jerry and I were strictly friends, so if you are someone with 'gusto for the lurid' [a Salinger quote], you've come to the wrong place.”

What you will find, according to Christie's, is “the largest Salinger archive to appear at auction, rich in literary, biographical and psychological detail.” Considering his silence to the press, there are few other places where so many of his thoughts can be discerned. He reveals much of his literary taste to Ms. Smith. Emerson is his favorite American writer, and he has “love, love, love” for Chekhov. He has no such feelings for Nietzsche. “Nietsche [sic] is good for practically nobody, of course, except ambitious young Hitlers and emotional malcontents looking for extravagant Aryanism.”

Salinger spent much of his time cloistered in his home watching movies. He loved the Beatles' movie Let It Be, but despised Yellow Submarine. Ms. Smith sent him a Joni Mitchell album, which he liked.

His letters were filled with affectionate references to his children. He provides some advice on marriage, though it could be questioned whether he was the best source on this topic: “Marry up with no one whose collective and single parts don't give you peace, pleasure, and comfort like nothing else.” Salinger also had some advice on a particular boyfriend she had described: “[He] doesn't really sound like too much. ... It may be he'll improve with age, but I wouldn't bet on it.” Salinger has a comment that fits with his own public silence: “I don't lecture ... or talk anywhere, thank God. I despise talking writers.” In a more dramatic expression of his feelings, Salinger writes, “One of the Boston newspapers, evidently hard up for news, is poking into my life up here ... . How I hate it, and how it brings out every asocial and murderous instinct in my head ... it's all so hideous, embarrassing, interruptive, incursive and rotten.”

In a personal note, that may help explain the writer's psyche, he writes, “I'm sorry and a little ashamed to say I sometimes feel bitter towards my own parents, and have no deep affection for any part of my old family life.” While his relationship with Ms. Smith did not turn romantic, there is a certain amount of innuendo. He writes, “Imagine, madam, the possible fireworks in the sky if you'd been born twenty or thirty years earlier, or I twenty or thirty years later.” He also sounds enthusiastic about writing, at one point saying, “I'm excited about work. I think I have about fifteen years' more work to do, and it's the kind I've been waiting for.” Continue to write, he did. Publish, he did not.

Salinger and Ms. Smith continued their correspondence for ten years. She could not recall who wrote the last letter, but as she explains, “The relationship just ran its course.” Still, after all of these years, she remembers Salinger fondly, as a warm and caring man, not the cold, aloof individual his need for privacy made of his image.