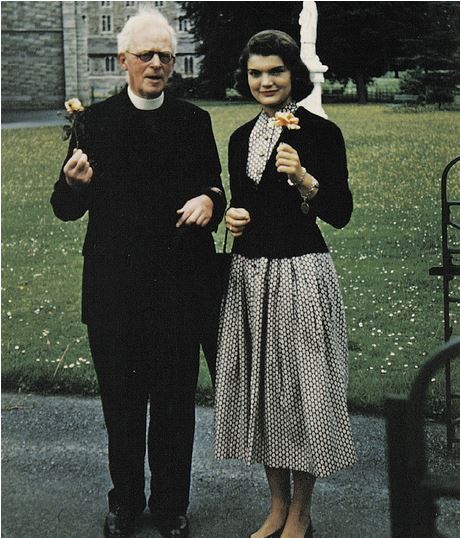 Editor's Note: This article was written in anticipation of what might have been the most important sale of the year in the field of books, manuscripts, and ephemera. An Irish auction house, not noted for sales in this field, had been commissioned to sell an incomparable collection of very personal letters written by First Lady Jacqueline Kennedy over a period of 13 years. However, the sale generated much controversy, not only between a couple of the parties involved in the find and sale, but over the appropriateness of selling this material in the first place. The result was that on May 21, the auctioneer issued a statement saying the seller had withdrawn the material. What follows is a description of the items, sale, and intrigue prepared before the items were withdrawn. At the conclusion, we will return to an update about the withdrawal.

An amazing trove of letters written by Jacqueline Kennedy was recently discovered and will be going up for auction in Ireland next month. If estimates are correct, it will take in well over $1 million, perhaps several million. That is not surprising, as they provide a tremendous insight into the thoughts and emotions of America's most famous first lady. This tale also brings along more than its share of controversy.

The story begins in 1950 when Mrs. Kennedy, still Jacqueline Bouvier and just reaching the age of 21, takes a trip to Ireland with her stepbrother. His family had known Father Joseph Leonard, of All Hallows, Dublin, since the 1920's. They arrange for Fr. Leonard to give them a tour of the city. The elderly Fr. Leonard, over 50 years her senior, and young “Jackie” strike up a surprising friendship. He presents a warm and human face to her church, something she found wanting in the priests she had known back in the states. So begins a long correspondence, a confiding in someone rare for Jacqueline, who will guard her privacy jealously the remainder of her life.

Jackie would see Fr. Leonard only once more – five years later during a trip to Ireland with her husband, Senator and future President John F. Kennedy. Nevertheless, their correspondence would continue for the rest of Fr. Leonard's life. The early years of the correspondence would be filled with Jackie's adventures. A well-to-do young lady, she would do much traveling, giving regular accounts to her Irish friend. She would reveal her first engagement to the Priest, how sure she was it would succeed, only to be followed with a note that they had broken up. Then she would describe her new love, the son of English Ambassador Joseph Kennedy, an engagement that did end in marriage. She would confide her hopes and fears, at times saying things it is doubtful she ever told her husband. In time, he would become President, she first lady, and then it would all fall apart. JFK was assassinated, and Fr. Leonard would do his best to provide comfort to a totally devastated friend. The story comes to an end not too much later. Fr. Leonard became ill, and died the following year – 1964.

Mrs. Kennedy was intensely private with personal matters and certainly would not have wanted her thoughts made public. Fr. Leonard undoubtedly never would have broken her confidence. However, Fr. Leonard, naturally, would not have had offspring to preserve his wishes. For the 50 years since his death, the letters have remained in archives at All Hallow's College, their significance either forgotten or unknown. Recently, bookseller and appraiser Owen Felix O'Neill was brought in to value another item, a Book of Hours dating back to 1460. Apparently, this led to his inspecting other items in the archives, and the discovery of the collection of Fr. Leonard's letters. There are 33 of them, all but 4 with their original mailing envelopes. There are also several other items relating to Mrs. Kennedy which will be sold separately, but the 33 letters will be offered as one lot. At least some of the letters from the other direction, those written by Fr. Leonard to Mrs. Kennedy, are held at the John F. Kennedy Library.

Some of the content of these letters got out to The Irish Times and Boston Globe. The Times published parts of the text, the Globe images of the letters as well. It appears the bookseller who evaluated the material was the likely source. Among the thoughts expressed by Ms. Bouvier/Kennedy, these are some of the more interesting:

In 1952, Jackie became engaged to John Husted. She writes, “So terribly much in love - for the first time - and I want to get married. And I KNOW I will marry this boy.” She didn't. Three months later, she broke off the engagement.

By the following year, Miss Bouvier had a new love, and she is “dazzled” to find herself in a world of “crowned heads and Men of Destiny.” Still, while noting it is a glamorous world from the outside, “...if you’re in it – and you’re lonely – it could be a Hell.”

As much as she has fallen in love with John Kennedy, she does sound a warning, that, according to rumors about his roving eye, was prescient: “He’s like my father in a way – loves the chase and is bored with the conquest – and once married needs proof he’s still attractive, so flirts with other women and resents you. I saw how that nearly killed Mummy.” Nevertheless, a year into the marriage, Mrs. Kennedy writes, “I love being married much more than I did even in the beginning.”

The most revealing letters come during her time of deepest tragedy. Her faith is shaken as she, a devout Catholic, wrestles with the why. Interestingly, she never questions the existence of God, but rather, his actions. “Either there is no plan for us on earth – or God had some special plan when he took Jack – but I would just like to know what it was – as I am so bitter against God.”

She continues, “I think God must have taken Jack to show the world how lost we would be without him – but that is a strange way of thinking to me – and God will have a bit of explaining to do to me if I ever see him. But I will see Jack again – I never thought that before – but now I wish for it so much – I can will it to happen – with or without God.”

Jackie goes on to promise she won't bring up her children “in a bitter way,” though she remains angry with God. “The only person I will ever be bitter to is God – and only He and you and I know that – and maybe with the years I will find out why. I have to think there is a God – or I have no hope of finding Jack again – but I do not think he managed things very well.”

Unfortunately, Fr. Leonard would not be able to help Mrs. Kennedy much longer. Now aged 87, he died the following year.