The Zoummeroff Sale: How Do We Cope With Crime? 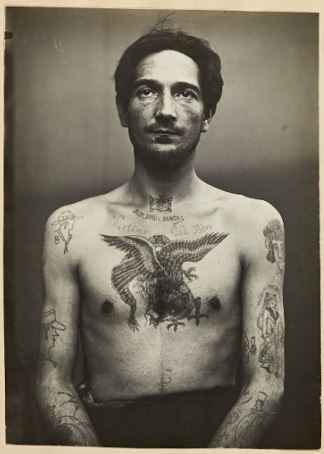 Some auction sales are all about money, but others try to tell a story. The one entitled Crimes & Punishments (Pierre Bergé & Associés) that took place on Friday 16th, May, sure had something to say. But it was clearly misunderstood by some, as two items were pulled from sale: a first edition of Mein Kampf by Hitler, as well as a book bound in human flesh. The controversy and debates about censorship that followed proved that books haven’t lost all their power.

The Mighty Collection of M Zoummeroff

“I don’t pass any moral judgement on these books,” confessed M Forgeot, the expert for the sale. “Some of them shock me, others disgust me or excite me. But they don’t tell the story of “bastards” only, they also denounce the atrocities committed by man.” This fascinating collection belonged to Philippe Zoummeroff, a well-known collector and the current administrator of the French National Library, who had spent more than fifteen years gathering it. “Dealing with crime and justice, I was bound to come across some evil people,” he admitted. “But I’ve never been fascinated by their misdeeds. Crime is part of who we are, and it started as soon as two men faced each other, with Abel and Cain. But this collection also underlines the role played by people who made justice a more human institution, like Cesare Beccaria; he was among the first philosophers of the 18th century to stand against the death penalty.”

As a matter of fact, M Zoummeroff didn’t stick to theory, as he created a fund for the rehabilitation of prisoners and co-wrote a book entitled Prison Doesn’t Only Happen to Others (Albin Michel 2006). “I’m mainly concerned by the consequences and stakes of the incarceration of young offenders,” he said. But he had eventually been around the block—and he decided to let his collection go. According to M Forgeot, these documents were hardly associated to bibliophilism. “This sale, and most particularly the catalogue, is a way to focus on an on-going issue: how do we cope with crime?” Fearing the collection might end up in some dark room, M Zoummeroff didn’t donate it to the National Library of France. “I know it will be scattered, but only to end up with people who are truly interested in it,” he said. Ironically, the sale attracted several official institutions such as the National Library of France or the National Archives that both pre-empted several items. Other museums were also quite active, including the Musée du Barreau (Museum of the Bar). Finally freed from this devouring obsession, M Zoummeroff will now focus on his next project, a biography of Thomas Edison. Aged 85, this surprising man hasn’t lost his curiosity for the world.

On May the 7th, the Jewish association Bureau National de Vigilance Contre l’Antisémitisme (BNVCA) published a press release on its website, asking for Pierre Bergé & Associés to withdraw from sale item 309, a copy of the first edition of Mein Kampf written by “Hitler this dictator”. The association was outraged by the fact that it was described in the catalogue as “a piece of art written by a poet or a member of the French Academy (sic—the catalogue didn’t introduce Hitler as a poet or a member of the French Academy, the BNVCA probably meant as if it had been written by a poet etc.)”. The book was depicted as the “devilish dejection” of a “German guilty of the death of millions of people (...) and responsible for the Shoa.” Suddenly harassed by journalists, M Forgeot was clearly irritated. “This is ridiculous. We are dealing with history, not with anti-Semitism. On the contrary, this crucial testimony perfectly belongs with this collection.” M Zoummeroff, for his part, never wanted to pull the book from sale: “This is a stupid controversy,” he said. “They are idiots! I’ve read Mein Kampf, of course, and it taught me something: Europe shouldn’t have waited for 1938 to stop this dangerous man.”

Mein Kampf is obviously a special book, and the French authorities are very concerned about its circulation. “In order to print it,” said M Forgeot, “you have to add at least ten pages of historical contextualisation and warn the readers about its implication.” But at the end of the day, it is not banned. As far as the accusation of anti-Semitism is concerned, suffice to say that M Zoummeroff is of Jewish ascendance, and that he has lost some relatives in the Nazi’s camps during WWII. But this sale also teaches us that justice and attitudes have often evolved following a witch-hunt. “The fight of BNVCA is legitimate,” said M Forgeot, “but I think they chose the wrong target. Anyway, our decision was to step away from controversy and to avoid any incident during the sale.” Let’s underline that the sale also featured two copies of the infamous Code Noir that has regulated the slave trade for centuries—it taught slave owners how to punish a disobedient slave according to the nature of his so-called crime. Curiously, no one complained about these ones. Every community to its own fight, I guess.

On October 22nd, 1930, Louis-Marius Rambert and Gustave Mailly broke in the house of M Bergeron and his octogenarian aunt in Ecully, and murdered them both with a hammer. Rambert was no newcomer to crime, as shown by his numerous tattoos. He had a striking one on his chest, representing an eagle and a dragon fighting each other. Nowadays, this tattoo graces the cover of a bookcase enclosing Rambert’s manuscript memoirs. Indeed, it was bound with the skin of the criminal—at a closer range we can even make out a few hairs! “Anytime I would look at it, it gave me the creeps!” confessed M Zoummeroff. “A binding in human flesh is necessarily disturbing, but let’s first remind that Rambert had officially bequeathed his skin to Dr Jean Lacassagne, an eminent criminologist who had followed him, and who had the bookcase bound. Furthermore, this item is quite relevant to the collection, as tattoos have always been a distinctive sign among criminals.” It was pulled from sale too, but this time it was to be blamed on the committee of experts of Drouot. “It’s forbidden by law to trade human remains, but this restriction doesn’t apply to “obvious cultural items”, recited M Fourgeot. “But what is this book if not an obvious cultural item?” At the end of the day, the controversies didn’t discourage people, as our expert received “numerous offers for the two items.”