“Everything Equine” at Keeneland Library in Lexington Kentucky 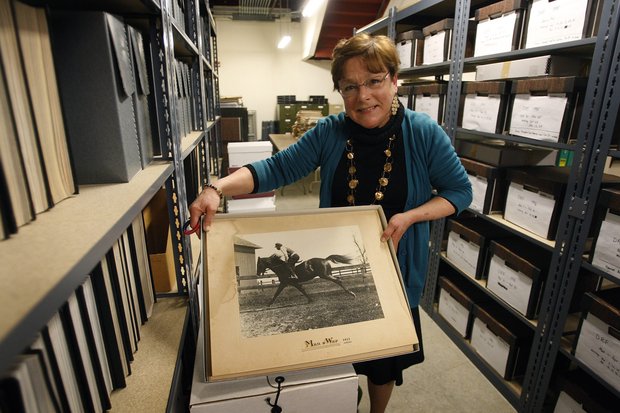 Most horse racing enthusiasts are familiar with Keeneland, one of America’s top ranked tracks in Lexington, Kentucky. Each year the venue hosts a variety of racing meets and major sales. Less well known is the Keeneland Library, housed in its own multi-story deluxe 10,000 square foot building on a hill just a short walk to the track. This facility is where the book world and the horse world meet and it is according to library director Rebecca “Becky” Ryder, “the home of everything equine.”

“The Keeneland Library is one of the largest libraries about horses in the world” wrote the Lexington-Herald Leader in a March feature article. “It is the largest library devoted to the thoroughbred — everything from the history of racing to stud books and pedigrees to small collections of racing silks and horseshoes.”

It is a non-circulating reference collection which contains an estimated 20,000 books augmented by journals, racing forms, photos, ephemera about early 20th century tracks and other material as well. “It’s the whole spectrum,” Ryder said, “horses, tracks, racing, breeding, veterinary, pedigrees….” About 80 percent of its books are cataloged and may be searched on line (See catalog link at end). Where digital copies are available links are provided.

The Keeneland Library also houses writing and statistics as well as horse sculptures and photos and Daily Racing Form in digital format. It is home to other non-horse treasures too: It has one of the largest photographic collections of the Ringling Brothers Barnum & Bailey Circus.

A variety of scholars and authors have used it as a resource including writer Laura Hildebrand who did research there for Seabiscuit: An American Legend - a best seller about the famous race horse. Including Ryder, Keeneland has a staff of three full time employees, two part-timers and it usually hosts library-school interns too.

Ryder has held the position for four years and calls it her “dream job.” She was formerly head of preservation services for the University of Kentucky in Lexington for 20 years. There her work included preserving Kentucky newspapers. In 2007 she began a collaboration with Keeneland to archive the Daily Racing Form.

“I got to know them pretty well,” she said. So when there was an opening “my name came up and it was a good fit.” She is not the head librarian, rather an administrator working on “strategic planning and setting the direction for the facility in years to come.”

Like many other libraries the trend is away from “books only” collections. “The main things we’re interesting in now include photos, ledgers, diaries and business records

We’re looking for material about historic farms, historic families. We are moving toward being a primary resource as a major industry.”

“Since I’ve been here,” she said, “I’ve learned about the industry. I knew about racing, but I didn’t know about economics, sales, breeding and how big it is, and how many auxiliary services it supports. I’ve also learned about equine athletes -- the animals and the jockeys. Riding a 1,000 to 2,000 pound horse, in and out of traffic, takes skill and guts.”

As for acquisitions Keeneland is actively assessing its collection and considering its gaps. “We do buy some,” she said, “but not a lot.” Like many special collection librarians she is always interested in receiving inquiries. “If people have unique equine material to offer I would encourage them to be in touch.”

The library also receives many calls asking for help. “We don’t do appraisals," she said, “and definitely stay away from valuation. But we do help with identification, bindings, association value, historic value, things like that, but no prices.”

Even with a large and relatively new facility room to expand is a concern. “We’re nearly out of space,” Ryder said, observing that the library was approaching capacity.

With an eye toward making more room and fostering better community relations the library held its first ever book sale in March where 10,000 volumes were put out at prices ranging from $5 to $25. The sale also included rarer items at higher prices.

That event caught the eye of Lawrence Hammar, owner of Blue Jacket Books in Xenia, Ohio, who ended up with a large assortment of things that didn’t sell. He carted home 103 boxes, which he estimated contained some 1,200 horse related books. So far he’s cataloged and listed the first forty boxes and has already found buyers for some of his new holdings.

Hammar was enthusiastic about his new relationship with the library and praised the “first rate and memorable” tour of the library he received from Ryder. That included the preservation area and climate controlled vault where he viewed African American jockey themed quilts and Nashua’s blanket. He was also impressed with a large collection from two different photographers containing thousands of glass plate negatives including derbies, sales, home life and other subjects.

A short stubby specially built case with pull out shelves containing seven photo albums going back to the 1930s also caught his eye. “It was fun to look through them and the case must have weighed 250 pounds. It was the most unusual shelving of ephemera I’ve ever seen."

In addition he has taken a special limited reprint edition of the Kikkuli text, one of the oldest known manuals of on horse training, on consignment and is selling it for the benefit of the library.

Still in need of space Ryder is contemplating a second sale in about 18 month. “March was not a good time,” she said, “It was very cold and we were in non-heated space. This time we're aiming for August.” Despite the chill factor she was pleased that she got to meet so many people including dealers, writers, and residents of the nearby area.

“In the end,” she said, “nothing was thrown away and everything was “placed with somebody who was delighted to have it.”

Admission to the Keeneland Library is free; it is open to the public Monday through Friday and also has Saturday hours during the racing meets.