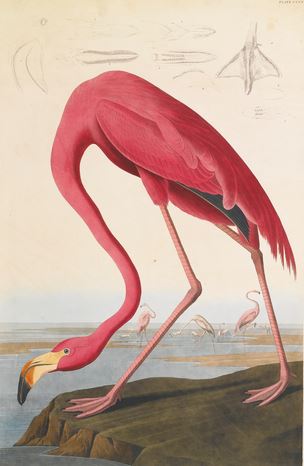 A copy of the most expensive, reasonably obtainable printed book was sold at auction at the beginning of April. The double-elephant folio first edition of John James Audubon's Birds of America was hammered down at Sotheby's in New York on April 1. For years, Audubon's Birds held the record for the highest price ever reached at auction. It was pushed down a notch last fall when a copy of the Bay Psalm Book surpassed its record, but the Bay Psalm is not really obtainable. It had been 66 years since the previous copy was offered at auction, and it's unlikely that any of us will live long enough to see another one come around. A Gutenberg Bible would obtain many, many times as much as a Bay Psalm if it ever reached market, but none of those have been seen since early in the last century. An Audubon first is still obtainable, a copy coming to market every few years.

This can be explained by the relative commonness of a first edition Birds of America. There are believed to be at least 120 copies of it still in existence. Only 11 copies of the Bay Psalm Book are known to have survived. Many more copies of the Bay Psalm Book were said to have been printed, but it was not a spectacular production and would have been used until worn ragged. Audubon's Birds was a spectacularly beautiful book. Most copies were lovingly cared for and handed down through the generations.

This copy did not achieve anything like the $11.4 million record reached by the Lord Hesketh copy in 2010. It wasn't expected to be close. The Lord Hesketh copy was in pristine condition. This one was not. It wasn't in bad shape; it just wasn't particularly good either. Instead, it sold for $3,525,000. That was above the $3 million estimate of its previous owner, the Indiana Historical Society, and within the $3-$5 million estimate range given by Sotheby's.

The Indiana Historical Society purchased its copy in 1933, for a very reasonable price of $4,000. That was during the height of the Depression, so bargains were undoubtedly available, especially since $4,000 would have been a meaningful amount of money in those days. Nonetheless, a gain of 88,000% is more than good, even for 80 years. Whoever made that purchase on behalf of the Indiana Historical Society is owed a big “thank you.”

The shortcoming in terms of value with this copy is that it had been purchased by the Indiana Historical Society from a library. Library copies are often actually used, as opposed to being gently placed on a bookshelf. There was some soiling and other evidences of use. Linen backing to the plates did not help. Still, $3.5 million is serious cash. We do not know this for certain, but would not be surprised if this is the highest price ever paid for an ex-library book.

Along with Audubon's most famous work, one other book was sold at Sotheby's auction. It was a copy of Audubon's other great color plate book – a first edition of The Viviparous Quadrupeds of North America. It sold for $245,000. The Indiana Historical Society purchased this book in 1951 for $900.

The Probability of Reappearance tool that comes with the AE Database estimates that another copy of the first edition of Birds of America will likely come around for auction again in roughly another 3 years. If you are interested in getting the next one, we suggest you start saving your pennies today.