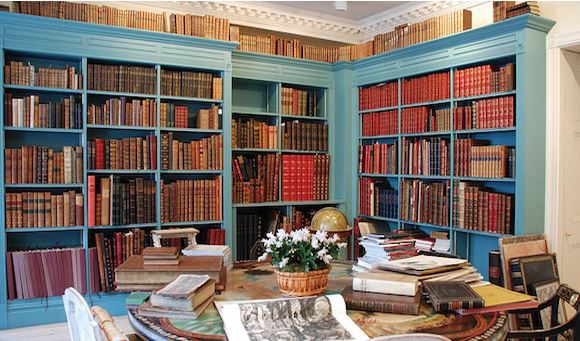 Shapero Rare Books is a world leader in rare and antiquarian books.

New offerings in the stock market, IPO's (initial public offering), are common these days, particularly in the high tech field. Those from well-known brands like Facebook and Twitter received enormous publicity and billions of dollars in investments. Everyone, it seems, wants to participate. What you don't expect to see is public offerings in old technology, and what could be more old technology than antiquarian books? Of course, yesterday's technology can be today's collectible, and that was the justification for a recent IPO you might have missed. The company was Scholium Group. The IPO was not covered by Bloomberg News, nor debated by the talking heads on CNBC. The stock had no dramatic movement, either up or down, on opening day. This one definitely slid under the radar of the financial news beat.

Scholium Group, a name you may not recognize, has three major divisions. There is South Kensington Books, a London shop selling newer titles, and Ultimate Library, which provides books for libraries in luxury hotels and personal residences. However, the division that will be familiar to those in the rare and antiquarian book trade is Shapero Rare Books. Shapero has been selling high-end rare and antiquarian books and other works on paper since it was founded by Bernard J. Shapero in 1979. Scholium acquired Shapero Rare Books a few years ago when its finances became tight, but Mr. Shapero remains with the firm in senior management.

While many dealers have found these to be challenging times in the rare book trade, evidently Scholium's CEO, Philip Blackwell, doesn't see it that way. He exudes confidence. Blackwell has long been involved in the book trade if not the rare book trade, he being of the English bookselling Blackwell family. He was previously Group CEO of the Oxford based Blackwell's book stores and international wholesaler. As for the antiquarian market, it should be noted that Shapero's segment, the high end, has been the most robust in recent years. In its registration statement, Scholium reported that Shapero had £5.38 million (roughly US $8.95 million) in sales last year. The average price per book sold was £6,100 ($10,140), the highest £400,000 ($665,000).

Scholium provided the following reasons for its seeking additional capital in the public market:

“provide it with capital to increase the stock of its business dealing in rare and antiquarian books and works on paper;

“provide it with capital to trade, in affiliation with other dealers, in the wider rare and collectibles market;

“provide it with access, in due course, to further capital to finance ongoing growth of the business, both organically and by acquisition of related businesses;

“attribute a value to its Ordinary Shares to increase employee motivation intended to be achieved by the employee incentivisation schemes; and

“enhance its public and corporate profile.”

Offered were 8 million shares at £1 each, for a total of £8 million, or US $13.3 million. Trading began on March 28 with listing on the AIM division of the London Stock Exchange. While the offering was not flashy, it was successful. All shares were sold. Adding retained shares, the company ended the day with a market value of £13.2 million ($21.9 million).

In a statement released prior to the offering, Mr. Blackwell said, “We are delighted to bring our company to market. The market for rare and collectible items is growing internationally alongside global wealth, and London is a key centre for this trade. The first step is to grow Shapero Rare Books, one of the most respected international dealers in rare books and other works on paper. Supportive capital from the London IPO market will allow us to take advantage of the attractive economics of the more general rare and collectibles market. High end dealers in these markets have limited access to capital and this will put us in a fantastic position to trade alongside these established specialist dealers to find and acquire high value items and collections beyond the reach of their normal capacity. These works will be sold on to the customers of Scholium and its dealer partners. We have an exciting opportunity to provide investors with exposure to the growing global high value collectibles market.”

After the IPO was completed, Mr. Blackwell concluded, “We are delighted to have received strong support from both institutional and retail investors. The market for rare and collectible items is growing internationally alongside global wealth, and London is a key centre for this trade.”

One point specific to Shapero is that they have connections with collectors to the east, Russia and other remnants of the old Soviet empire. Russia may not be filled with rich people, but there are a few of extreme wealth. Some are interested in acquiring the most important books of their own heritage, many of which found their way to Europe in the years when personal wealth was not considered a good thing in Russia. Shapero is helping facilitate that return.

Scholium's plan is to return a share of its profits to investors. They stated their first dividend, subject to “the Group's profitability, underlying growth, availability of cash and distributable reserves, and the need for funding to support the development and expansion of the business,” is envisaged as occurring in June 2015. They add that “the Company will adopt a progressive dividend policy thereafter.” For anyone who has ever dreamed of owning an antiquarian bookstore, but never wanted the hassle of actually running one, you can become a co-owner for as little as a pound, more or less. If you would like to track the stock, its ticker symbol on the London Exchange is SCHO (you may find it on U.S. sites as either SCHO.L or SCHO-GB).