A1 Books – Down for the Final Count 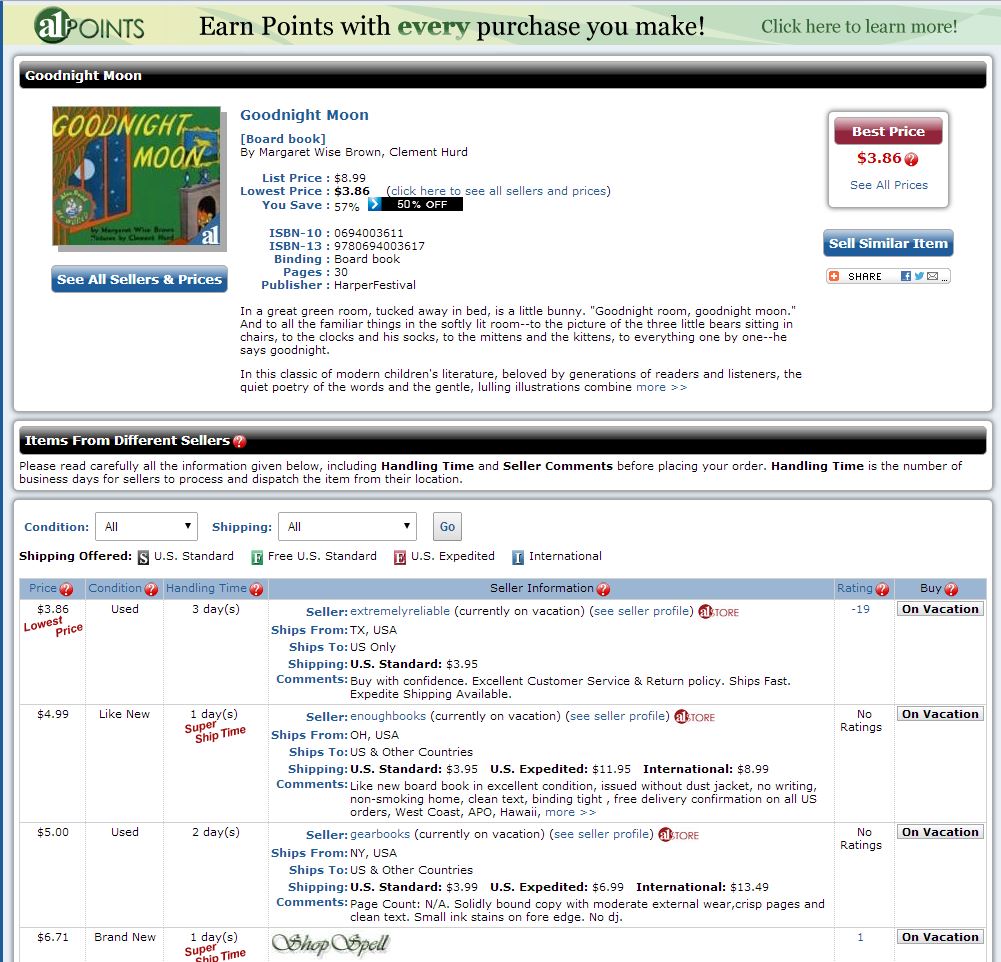 Goodnight A1 – all merchants are “on vacation.”

Usually, we react to the passing of an old friend with shock and sorrow. Once in awhile, however, it is with astonishment, as in “I didn't know he was still alive.” Such is the inevitable reaction to the passing (again) of the latest incarnation of internet bookselling pioneer A1 Books. Yes, they were, sort of, still alive. This time, it looks like it is down for the final count, there really not being much point in prolonging it any longer. The battle was lost a long time ago.

A1 began selling books in 1995 using that strange new invention – the internet. They beat Amazon to the punch. One can only imagine what might have been if they had maintained their head start. They didn't. At the time, A1 specialized in textbooks. However, founder Shinu Gupta soon expanded into the business of selling remainders and other books online. By the late 1990's, the firm was claiming an inventory of half a million books, and that would grow to 1 million early in the new century. A1 would open a large bricks and mortar store near its headquarters in New Jersey, and a sister online business in Gupta's native India, convincing the Times of India to go into partnership with them.

A1's calling card was low prices, a business model much like that of Amazon. The ideas were there, but not the level of financial backing to keep up. By the middle of the first decade of the new century, A1 had opened its site to outside sellers, becoming both a listing site and a seller itself, similar to Amazon. It announced a new site – A1 Outlet – which would sell all kinds of merchandise, again similar to Amazon, but the idea languished, not opening until 2009. By then, A1 was just about out of money. A1 even took to becoming a mega-seller of its books on Amazon, focusing on low prices.

It is hard to know how successful the company was at its peak, it being privately held. It certainly was on a different level from most booksellers, possibly a couple of tens of millions of dollars in sales, reportedly millions of customers in total. It did very well for itself, just not well enough. It was attempting to compete with giants on a relatively small budget, and once it got behind, catching up was almost impossible. It was late to the game of being a listing site, and way too late to becoming a department store online like Amazon. It spent most of the first decade of the 21st century trying to hold back the tide, generally an exercise in futility. It was too little too late.

In 2010, A1 Books filed for bankruptcy protection. It attempted to reorganize itself, but no one was interested in financing an army for a war it had already lost. The courts shut the business down, selling off its assets at auction. A1 was no more.

But... old book sites can be like old soldiers - they don't die, they just fade away. A buyer took over the name and some of the assets, reopening the business in 2011 under the A1 Outlet name. Books were the major specialty, but a wide variety of other merchandise was also sold. Perhaps, attempted to be sold would be a more accurate description. All indications are that very few merchants sold much of anything on the site, perhaps a book or two now and then, but no more. If the reborn A1 made much of an attempt to promote itself, it was not obvious. Certainly, the level of investment needed to resurrect the site was not employed, and investing heavily in an attempt to go up against Amazon would likely have been a foolish use of money. A1 may not have been dead, but no one knew it was alive. It was just fading into oblivion.

It appears that earlier this year, A1 threw in the towel. There was no announcement. The site had slid into such insignificance it is unlikely anyone would have noticed. Sellers were apparently emailed a message that the site was closing. On the site itself, nothing was posted. It's just that when you went to purchase something from a seller, there was a notice that the seller was “on vacation.” Every seller was “on vacation.” This was so as not to worry people who had placed orders on the site earlier. However, this time it looks like A1's sellers, and A1 itself, are on permanent vacation.