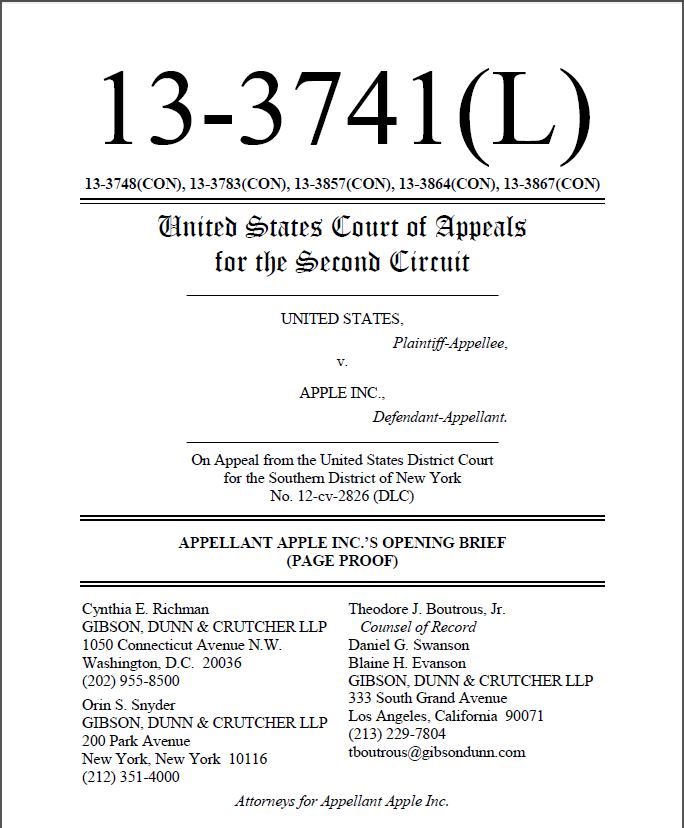 Apple appeals the judgment against it.

As promised, Apple has filed a blistering appeal against a federal court decision that held it had participated in a conspiracy with book publishers to fix the prices of electronic books at artificially high levels. “Apple and the Publisher Defendants agreed to work together to eliminate retail price competition in the e-book market and raise the price of e-books above $9.99,” wrote District Court Judge Denise Cote in her opinion. Just the opposite, responded Apple. “Apple’s entry as an e-book retailer marked the beginning, not the end, of competition.” Who is right? Stay tuned.

Here is what we know. In late 2009, Amazon controlled 90% of the e-book market. Part of their strategy for gaining such control was low pricing, sometimes selling books at less than their cost, particularly with the most popular titles. It made it extremely difficult for others to enter the business.

While book publishers were able to sell these e-books to Amazon for the prices they wanted, they were still unhappy. Two things bothered them. One was they feared Amazon's unexpectedly low e-book prices would interfere with their ability to sell printed books, a more lucrative market. Secondly, no one likes to have most of their sales go to a single customer. It can give that customer enormous leverage over the supplier in future negotiations. That is a very risky position for any supplier.

Evidently, various publishers were aware that their compatriots were similarly distressed by this situation, though we do not know how much direct communication there was between them. After they, and Apple, were sued by the Department of Justice and others for a conspiracy to fix prices, all five publishers agreed to pay large sums in settlement. Whether they settled out of guilt, or, as one publisher claimed, simply because the potential financial risk of a loss in court was so great it would put them out of business, is uncertain.

In December of 2009, Apple approached the publishers with a plan to open an online e-book store, to go along with its newly introduced tablet computer, which can also be used as an e-reader. However, Apple concluded this would not be feasible unless two conditions were met. First, it must make a reasonable profit. Apple has no interest in building market share by losing money, as Amazon does. Secondly, it did not want to have anyone else undercutting their prices, making them look bad. If Apple needed a 30% profit, while Amazon sold at cost, naturally Apple's price would be 30% more for the same books, an embarrassing situation. Apple may charge a high price for its merchandise, but that is because it is unique, Apple-branded merchandise. It does not want to sell the same thing as Amazon for a much higher price.

Apple explained its requirements to the publishers. What it wanted was for the publishers to adopt “agency” pricing. At the time, the publishers were selling their e-books (primarily to Amazon) at a set wholesale price. Amazon then set the retail price. The bookseller was free to go as low (or high) as it wanted, depending on how much or little it was willing to make on each sale. In agency pricing, however, the publisher sets the retail price. All retailers must sell their books for at least that much. The retail prices they set afforded a 30% commission for the retailers. Of course, this meant that books Amazon was selling at cost or a loss would rise by at least 30%.

Exactly what happened next is unclear. What we do know is that a few weeks later, all at once, the five publishers switched over to agency pricing. Amazon had little choice but to accede. Meanwhile, Apple began selling e-books. According to Apple, between themselves and Barnes & Noble (who could also now afford to sell e-books), they control 30%-40% of the market, meaning Amazon's share has dropped substantially from its previous 90%.

So the question becomes, what did Apple do in that period between telling the publishers individually what they demanded to sell e-books and the publishers switching to Apple's required agency model? Apple had a legal right to tell publishers it would only sell if prices were set so they could make 30% while no one else could sell for less. That is not illegal price fixing. What is illegal is for them to act in concert with multiple publishers to set prices – that is a legal “conspiracy” to fix prices. Even if the publishers conspired with each other to set prices, which is illegal, that does not necessarily mean Apple conspired with them if Apple acted independently with each. However, if, as the court ruled, in the Department of Justice's words, Apple was a “ringmaster” in this conspiracy, then they have violated the law.

The court looked at the evidence and said, in effect, of course Apple was pulling the strings. There is something in the law called a “per se” standard that says there is an antitrust violation where the evidence is obvious. And then, there is another standard where it is not so obvious, but if the evidence establishes participation in a conspiracy, it is also a violation. The court focused on “per se” guilt, but said Apple was guilty under both standards.

Apple also challenged whether the result of their requirements was anti-competitive anyway. They cite the fact that Amazon's share has substantially decreased, while new vendors now offer e-books for sale. That is pro-competition, not a hindrance to it, Apple argues. There are now more retailers selling e-books. On prices, Apple also cited statistics that e-book prices, as a whole, have come down. Self-published books, in particular, Apple claims, have seen their prices drop, as the 30% profit Apple demands leaves the self-publishers 70%. Apple says this is twice what Amazon used to give them before Apple began carrying their books, enabling these publishers to lower their retail prices. And one more thing – Apple says they did not demand publishers lower retail prices, only that the minimum price leave them a 30% margin. Publishers could set the prices at $9.99 or even less if they chose, so long as the wholesale price was 30% less. What appears to have happened, if Apple's statistics are right, is that overall e-book prices came down, though the prices for the most popular books, which Amazon used to sell at little or no profit, went up.

The Department of Justice has said it will respond to Apple's appeal in May. You can be sure they will give a far less benign account of Apple's actions. Judge Cote's decision paints a series of discussions between Apple and the publishers that implies that firm was knowingly leading them down the road of joint price setting, even while holding separate conversations. It will then be up to the Appeals Court to confirm that ruling, overturn it, or order a new trial. One thing you can count on – Apple will not give up easily or go quietly into the night. This case may one day find itself in the Supreme Court.