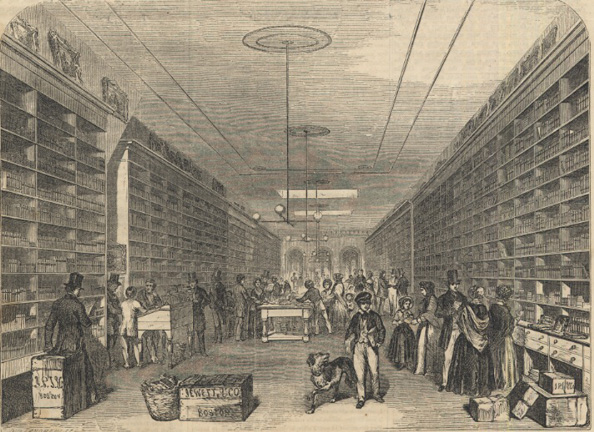 As you read this story many have already boarded planes or are driving to New York City.  48.8 million visitors will do so this year, some number measured in thousands will be heading for the American Vatican of rare books, the Armory on Park at No. 643 for the annual four-day affair New York Antiquarian Book Fair, jointly sponsored by the Antiquarian Bookseller’s Association of America and the International League of Antiquarian Booksellers.  The majority of participating dealers will be from the United States but many European countries, Canada, South America and countries across the Pacific will also send emissaries.  As disparate as are their home locations they are united by their trade:  sellers of rare materials most of which are printed.

The show is on the Upper East Side on Park Avenue at 643, mid-block between 66th and 67th.  There are many hotels nearby and restaurants all over the city.  This is not news to any of the fair regulars, be they dealers, institutions or collectors.  Most have been coming every year for a decade or more.  The issue has never been old-timers; it’s been the new blood.  The various fair committees and the highly experienced show organizer, Sanford L. Smith, have been trying for years to build attendance – often finding success.

This year the fair will be busy for several reasons, the economy worldwide is recovering, the local economy robust, and fairs generally benefiting from the decline of local rare bookshops.  More and more this show and others are becoming the field’s adhoc main streets - as itinerant booksellers increasingly travel the globe in pursuit of audiences that once a year come out to meet them in Melbourne, Toronto, Paris, London, New York, San Francisco and Pasadena.  Among all these events the New York Book Fair is the most important.

This fair is also a catalyst.  On the same weekend there’s another New York book fair, the Manhattan Vintage Book & Ephemera and Fine Press Book Fair in the Altman Building, 135 W. 18th, a two day Saturday-Sunday affair.  This event, unofficially called the “shadow fair,” lives off the always-interested audience that comes together for the ABAA fair.

And there is more.  There are auctions.  They too, like birds on a telephone wire are lined up for consideration, 89 worldwide in April, 23 of them in New York, 18 of them April 1st to the 10th.

Auctions in New York in April 1st to the 10th:

Sothebys:  The Inventive Eye:  Photographs from a Private Collection

Christies:  The Range of Light:  Photographs by Ansel Adams

Bonhams:  Treasures from the Caren Archive

The extraordinary catalyst for the month is the New York Book Fair and every other event will owe some of their success to its reputation and power.  All events should do well; by rights the Antiquarian Book Fair should be your first stop and do best.

April is an extraordinary opportunity.  If you can be, be there.  If you can’t, follow the events online.