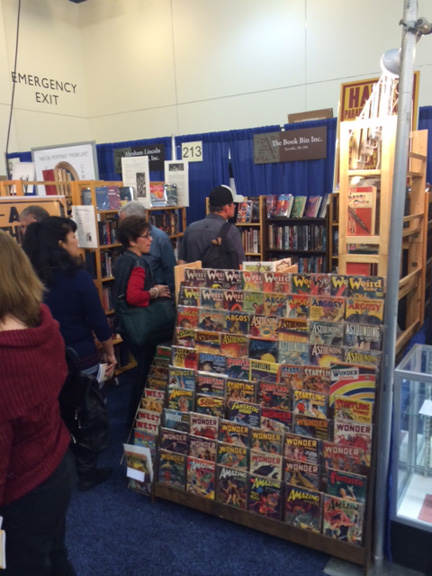 The Book Bin at Pasadena was busy selling the unexpected

Book Fairs on the West Coast

Recently, on February 1st and 2nd there was a book and ephemera fair in San Francisco at Fort Mason, on the water on the north side of the city.  The weather was cold and rainy and deterred some no doubt from attending the two-day event.  The following weekend the ABAA held its premier west coast show of 2014 over 3 days at Pasadena at the well-lighted and spacious convention center.  Both fairs would attract portions of the same audience but end up being very different events.

The San Francisco fair, organized for the second time by Nancy Johnson of Nancy Johnson Events Management LLC, was open to anyone interested to exhibit.  If you could pay the exposition fee and the additional cost for sundries you were in.  In Pasadena only ILAB and ABAA members could participate in the better-known and more widely publicized fair that set back exhibitors double what the San Francisco fair cost.   This set up a sartorial comparison, the San Francisco more blue jeans than designer jeans, the Pasadena fair suits with discrete designer labels.

Many exhibitors in San Francisco are frequent exhibitors at weekend events.  In some cases they do a fair a month and offer not only different items but also different categories such as postcards, objects and antiques.  For them books is one of the inventories they sell and they don’t bring them to every show.  Generally they and the other exhibitors did better with ephemera - in part because the sweet spot in the busy booths was $50 to $200 and that price range better suited to ephemera.  More expensive material sold but the crowds were in the perceived bargain categories.

This is not to suggest that the top of the line wasn’t represented and exhibiting.  The William Reese Company brought a fair approximation of a premier and extensive library, of course to sell books but also to convey the stature of the material they handle.  Bauman Rare Books was also there as were Peter Harrington and Donald Heald, Maggs Brothers, John Windle and Phillip J. Pirages to name only a few.  The list of serious booksellers exhibiting was long.  But so too were the dealers measuring their successes in ephemera, postcards and comics and at the end of the weekend it appears the less expensive material, post cards and comic books were where buyer interest focused.

David Lilburne of Antipodean Books, Maps and Prints summed it up very well.  “I’ll suggest to the Ephemera Society they hold a fair here.  Their members will do very well.”  San Francisco, for this weekend, was simply more interested in paper than books.

Over the next weekend many of the same dealers moved on to Pasadena.

The Pasadena fair was quite different, the venue, the Pasadena Convention Center, simply a marvelous setting.  Well lit, spacious, and adorned with creature comforts such as carpeting and conversation areas I suspect everyone liked the facilities.  So what if the show cost roughly double what the San Francisco fair cost, it turned out the difference was inconsequential to the calculus of exhibitor finances; $3,000 versus $1,500 [including counters, partitions, and additional lighting].   Add in the much better weather in Pasadena and the Rose Bowl city won the comparison in a romp.

Dan Whitmore, of Whitmore Rare Books, who did both the SF Fair and the Pasadena event said, “I did well enough at both but if forced to choose one over the other I’d choose the ABAA fair at Pasadena.  The more pleasant environment easily offset the higher costs.  We are all in the business of building rapport and the ambiance was terrific.”  It didn’t help he had to sidestep occasional drips from a leaky ceiling in San Francisco.

So Pasadena won hands down except for one factor:  sales.  In neither location were sales exceptional but San Francisco, because they opened their doors to independent exhibitors, had more eclectic less expensive material and plenty of cost aware browsers, probably was better as a mechanism for encouraging new collectors. Though there could have been more, those who came spent more of their time and most of their money in the booths that were stocked with less expensive possibilities and sent almost everyone who showcased such material home happy.

And what does this suggest?  Less expensive paper collectibles did well at both fairs although San Francisco offered more opportunities and somewhat lower prices.  And these sales did something else.  They provided a ramp up to the more complex collecting that top-tier dealers make a career of defining, explaining and selling.  In other words, as has been suggested before, we have to first engage the nascent collector and then over time educate them to the possibilities of collecting seriously.  Seen in this light the San Francisco fair was particularly effective.

Duncan McLaren of Lord Dunham Rare Books who has exhibited at both types of fairs, feels the greater opportunity to engage new collectors is at the independent fairs where there is not a long line of serious booksellers.  McLaren is exhibiting this year at more antique shows based on his 2013 experiences.  “Many of the items we are handling are physical historical artifacts and they are fresh in the antiques market.”

The two sides of the same coin, the serious rare books and the entry level comics and ephemera very visible in San Francisco and somewhat visible in Pasadena, actually set very well together, permitting the newbie to buy inexpensive material today while casting an eye on what and from whom they could hope to be buying in the years ahead.  I found the differences compelling – almost a visual primer of what collecting can become through time.  For conveying this impression both fairs deserve praise.

As to next year when the ABAA-ILAB fair returns to the Bay Area, the decision has already been taken on a 4 to 3 vote to have the 2015 fair in Oakland, just across the Bay Bridge from San Francisco.  About this decision I asked many people how they felt and their enthusiasm was lukewarm.  The net of everything I heard was “the ABAA councils have made good decisions before, they will make a good decision this time.”  And it should work out subject to two caveats:

That the change in venue is widely advertised and well explained.  The lack of the clarity about this year’s San Francisco Book and Ephemera Show’s move to Fort Mason led the news to get lost in the weeds and it affected attendance.

That the currently every other year SFB&E fair does not step into the gap created by the ABAA’s move across the Oakland Bay Bridge to Oakland, and take over Fort Mason to run their event in direct competition with the ABAA fair.  Many exhibitors would prefer to stay in San Francisco.  Set up as an ephemera and book fair [emphasis ephemera] that show should do very well.  It will help of course if the weather is better, the roof not leaking and if aisle carpets soften the concrete floor.  Running simultaneously the two fairs would create a mega weekend event but probably diminish support for the move to Oakland even as the combined event becomes the largest collectible paper event in the world.

Whatever the outcome the fairs are always interesting.  I bought one book and an archive of Hudson valley material at the SF fair and purchased, in Pasadena, a Fishkill broadside and made notes to consider another possible purchase.

Such events are always worthwhile.