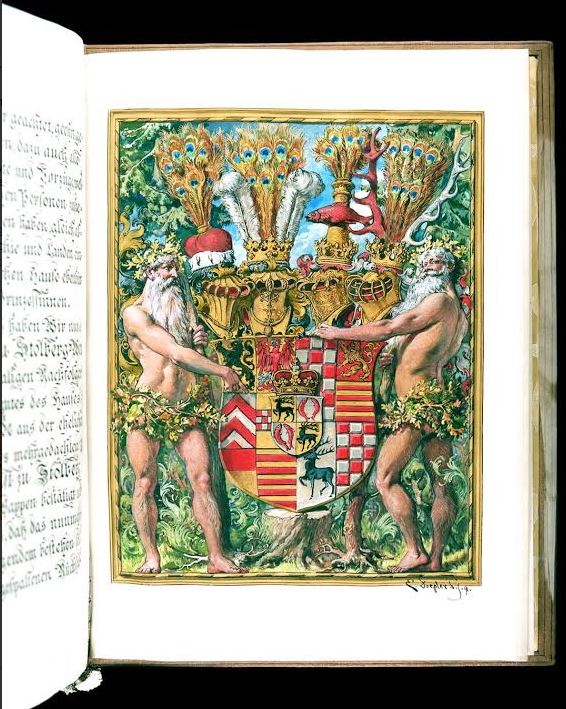 A diploma fit for a prince.

Stolen books and documents are too often the subject of news stories, such as the truly horrific thefts recently revealed at a major church library in Italy. Poor if not corrupt political appointments, a thieving library director, a priest caretaker who looked the other way, forgers, distributors, and possibly corrupt sellers wind their way into a terrible tale of thousands of stolen antiquarian books. So, it is nice to hear the story of a long missing document discovered by a curious American bookseller that was returned to its rightful owner in Germany.

This story begins when a man walked into Motte & Bailey Booksellers of Ann Arbor, Michigan, with an impressive-looking document in his hands. It was an Imperial German manuscript, written on vellum, dating to the era of Kaiser Wilhelm II. “Kaiser Bill” had even signed the document. Complete with a painted family coat of arms, it raised Graf (Count) Otto von Stolberg-Wernigerode from his position as a count to that of a prince. Stolberg-Wernigerode was born in 1837 to an ancient noble family. He served in the Prussian Army, was elected to the Reichstag, served as Governor of Hanover, and in 1878, was appointed Vice-Chancellor under Bismarck. He was Germany's first vice-chancellor. Stolberg-Wernigerode resigned that office in 1881 as his views began to drift from those of his mentor, Bismarck. He was a traditionalist, a moderate conservative who stood for the current order, but was also concerned for the well-being of those not born to privilege as was he. Perhaps it was his loyalty to the Kaiser that led to the latter re-instating his title as Prince in 1890, a title not granted to anyone in his family in almost two centuries.

The document, known as a “Fürstendiplom,” or princely diploma, gives the many titles of the Kaiser, details the background of the Count and who is eligible to inherit the new title of “Prince,” and explains how his new coat of arms should look. The artist was Emil Doepler, who would design the crest for the Weimar Republic which replaced Imperial Germany at the end of the First World War.

When he first saw the document, Gene Alloway of Motte & Bailey was impressed, but also concerned about its background. Many German documents were taken from private owners, first through confiscation of Jewish property during the Nazi regime, and then in the aftermath of the war, in the chaos of the first days after the German surrender. American soldiers came back with things they had collected, perhaps found in homes of Nazi officials, abandoned buildings, or purchased on the street from people whose source was unknown. Over the past couple of decades, attempts have increased to return these items to their pre-war rightful owners.

Alloway explains, “Right away I could tell this was different. It was beautiful, and signed by the Kaiser, but there was a note on it by a U.S. soldier saying he bought it in Berlin and sent it and the princely seal to his mother in Michigan. I suggested to the owner the manuscript might be war loot, and it was important to find out as much as we could before it was sold.” The possessor of the manuscript had inherited it from his father, but noted that his father had collected many unusual items and he did not know where he had picked up this one. The serial number of the soldier who obtained the manuscript in Germany indicates he served there in the 1950's, rather than right after the war, so most likely he purchased it from a German or a Russian, as the Prince's home was located in what became the Russian zone when Germany was divided. However, there was no connection between the family of the soldier who obtained the document in Germany and that of the Ohio man who brought it into Alloway's shop.

Alloway began contacting German museums to determine whether the manuscript might be stolen, and then contacted the museum at Castle Wernigerode, but was not making much progress. “I wasn't sure where else to look, but I was concerned about selling it,” he recalls. Alloway made the document available for viewing in his shop, and the local newspaper came in and ran a story on it. That story reached Philip Fürst von Stolberg-Wernigerode, current holder of the princely title. The current Prince has been actively seeking material lost from the family archive and contacted Alloway by email. The Prince explained that after the Second World War, his home (Hessia) was controlled by the Russians (East Germany). It was looted and robbed repeatedly, so much so that the librarian committed suicide. This diploma was one of the most personal of losses from the collection. The Prince thought the document had been taken by the Americans, who briefly controlled the territory after the War, but the 1950's date makes it more likely to have been taken during the Russian period.

The manuscript is now safely back with its legitimate owner, though the princely seal that was with it at the time it was sent to America is missing. Alloway is helping the Prince in his search to find the missing seal. The Ann Arbor bookseller concluded, “The former owner of the Fürstendiplom and I are very happy it is back where it belongs, as of course is the Prince. I think it was very wise and generous of the family here in the States to let it go back. Not everyone would do that.”