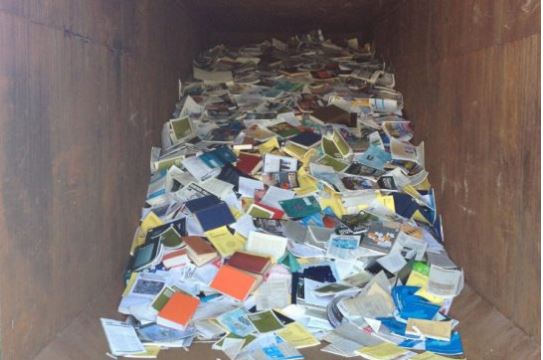 Photo of dumpster full of books taken by union official.

A decision by the Canadian government to shut down 7 Department of Fisheries and Oceans (DFO) libraries has stirred up a hornets' nest of controversy among scientists, librarians, and representatives of the DFO. The DFO is close to finishing the process of consolidating 11 of their libraries down to 4.

The Canadian story reflects changing times, a tale that is being told throughout the world these days, and will undoubtedly arise even more often in the years ahead. Digitization of books is a wonderful thing, making texts more readily available to researchers. The downside is the perceived reduced need for physical copies and personal library services many in government, who prepare the budgets, believe this implies. Additionally, there is much concern in Canada that not all of this material will be digitally preserved, some possibly lost forever.

Books relating to fisheries may not sound like a major field to many, but in Canada, with huge lakes and vast coastal waters, fishing has long been the lifeblood of many citizens. The existence of 11 libraries dedicated to the field is an indication of its importance. However, over the years, these libraries have seen declining physical use. According to the DFO, most locations received only 5-12 personal visits in a year, a truly astonishing number. Most contacts – 85% - came by email, phone and mail, while other use was by DFO employees. Over 95% of documents supplied were supplied digitally. External visitors accounted for just 2% of traffic.

When the DFO announced its consolidation, it stated that all material would be preserved. Great quantities would be scanned and made available digitally, with nothing being lost. They would only dispose of duplicates, these being offered to research institutions, or if not wanted, to employees. Only if no one wanted them would they be thrown away.

Has the DPO lived up to its standards? We are not in a position to judge, but your answer will depend on whom you believe. Some harsh comments have come from critics in the science and library worlds. Equally spirited defenses have come from the DFO.

The Tyee, a western Canadian news website, quoted Burt Ayles, identified as a retired research scientist and former regional director general for freshwaters in central Canada and the Arctic, as saying, “The loss of this library and its impact on fisheries and environmental science is equivalent to Rome destroying the Royal Library of Alexandria in Egypt. It's equal to that.” The library in Alexandria was the greatest library in the world at the time it was burned. Its loss was incalculable. Those are strong words. A scientist said to be a 30-year employee of the federal government who asked not to be identified said, “It's like a book burning.” Canada.com quoted Peter Wells, described as an ocean pollution expert at Dalhousie University in Halifax as saying, “It is information destruction unworthy of a democracy,” and calling the closings a “national tragedy.” An article on the website of the Toronto Star displayed a photograph sent in by a union official displaying a dumpster filled with books and pamphlets, said to have been discarded by the DFO library in Mont-Joli, Quebec.

The DPO pledged that unwanted material would go to other libraries if they wanted it, but Marie DeYoung, association president and a librarian at Saint Mary's University in Halifax, was quoted by The Tyee as saying, “No records have been provided with regard to what material has been dumped or the value of this public property. No formal attempt was made to transfer material to libraries of existing academic institutions.”

Some have charged the process is politically motivated, that the government is unfriendly to environmental causes, and therefore is happy to be rid of scientific data that may run contrary to its interests. Kelly Whelan-Enns, lead researcher with Manitoba Wildlands, a Winnipeg-based environmental protection group, expressed concern that this is an attempt to defray criticism of such things as adding pipelines to expand oil sands production in Alberta. He was quoted saying, “If you restrict public access to information on fresh water by closing libraries, then you limit people's ability to understand the environmental impact that kind of industrial development will have.”

Perhaps the biggest controversy focuses on what is called “grey literature.” This includes material that was not published in scholarly journals, and which is very rare if not unique. Much of it is original research. Many from the library or scientific communities are dubious that all of this material will be preserved. Jennifer Hubbard, a science historian at Ryerson University, was quoted as saying about 20% of the material she had been accessing at a closed New Brunswick library is not available online. At a minimum, it appears that the process has been unclear, as several quoted scientists said they have no way of knowing whether this material is being preserved digitally or simply thrown out.

The DFO countered these claims in a series of questions and answers posted online. It stated. “There will be no changes to the size and scope of the collection.” As far as disposing material is concerned, the DFO said, “The Department may remove only content that is duplicated at one or more libraries and, in rare instances, materials which fall outside the subject disciplines pertinent to the department’s mandate from its collection.” Concerning the material to be disposed, it said, “The Department is contacting universities and other local partners to determine if there is interest in acquiring some of the duplicate or non-DFO related materials. Some materials will be offered to on-site staff of the Department for work-related use.” It further stated the 'grey literature' “will continue to be available through a variety of means.”