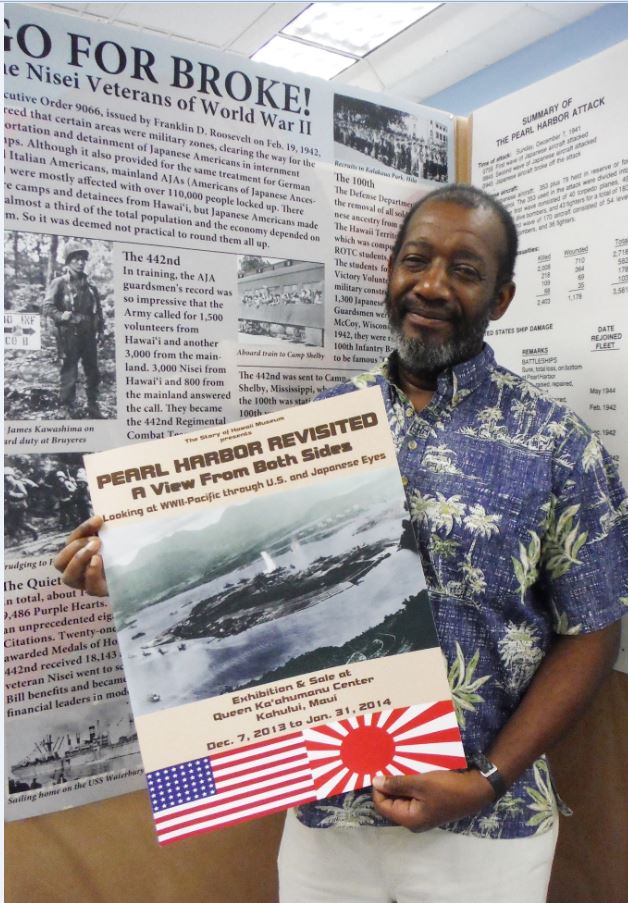 Bryant Neal experimented with a pop up exhibit and sale.

I’ve been writing from the seller’s viewpoint for AE Monthly for quite a while now. I've looked at various genres in the book arts, visited shows and fairs, profiled other dealers and sites and dispensed tips I’ve learned growing up in the trade and selling on-line on eBay.

This month's article is a summary of some of the high and low points of 2013 from my own business on the island Maui where I have been a Hawaii-Pacific specialist since 1979.

Burglary was the low point

There’s no question that the low point of last year came in April when there was a burglary at my property and many of my personal and business belongings were taken.

There’s no better wake up call about the need for better security than discovering your passport, client files, tax records and many valuables including a portion of my high end inventory had been stolen.

Yes, I had insurance and yes, they paid the claim promptly, but the experience left me shaken.

Next came changing all the locks, installing motion detector lights and moving what was left to more secure storage. It also meant closing my old bank accounts as well as notifying clients whose records were compromised by the theft.

As the police officer who came by a few days later pointed out -- one break-in in 30 years wasn’t exactly a crime wave -- still it was a painful reality check that reinforced the point that the days when no one knew or cared about old books in this part of the world, much less wanted to steal them, was over. Even on a little island in the middle of the ocean the need for improved security became a painful reality. To date nothing has been recovered.

The most interesting business experiment I participated in was consulting with a colleague who decided to try a pop-up retail antiquarian store at a local mall over the holiday season.

Though pop-ups have been popular for restaurants and food related events in this area I had not actually seen one done as a combination retail and exhibit venue. My friend Bryant Neal looked for a high traffic location and then pegged his exhibit to the attack on Pearl Harbor in 1941. He chose that theme because he had acquired a number of interesting maps, photos, books and documents that told the story of the WWII Pacific from the Japanese perspective. Hoping his material would find a market he signed a lease for 60 days at one of the island’s largest shopping centers. The terms were a relatively low flat monthly fee vs. 15 percent of sales.

The best part of the experience was working with him to select and display some of the original items he had acquired. Laying it out on the floor and trying to figure out how to display the fragile original material was challenging, especially in an environment not originally intended for this kind of event.

The store with almost 2,000 square feet of floor space did draw quite a few patrons. In December, during the height of the Christmas shopping frenzy, it turned out to be a good place for husbands to hang out while their wives shopped.

Working on the project I met many people and I learned quite a bit about the war years in Hawaii. Among the things I found out was the person that guarded Tojo before he was hanged in 1948 was from Maui. I also learned that the guard - now in his 90s - is still alive and living on my street.

It was reassuring to discover that lots of people are still fascinated by history. They still enjoy looking at maps, they still want to see the pictures of the voyaging canoes and learn about the Polynesian migrations as well as the story of other Pacific voyages.

In the course of December and January I watched the traffic develop and saw it was not quite a museum and not quite a store either, but rather an odd hybrid of unusual Japanese and American Pearl Harbor and WWII era memorabilia and vintage Hawaiiana mashed up with other kinds of goods, including giclee reproductions, arty travel souvenirs and low end nick nacks.

It did draw a crowd but it did not turn out to be a good way to make money. Even with high traffic and a bargain rent the hours were long and the overhead was high.

That said, my friend extended his short term agreement for another few months and is still evolving his sales strategy. For him the things that did well were reproductions of Pacific centered maps, nostalgia items like plaster figurines of ethnic types from the 1930s, decorative menus from the Matson line and almost anything that evoked the Hawaiian Monarchy period.

Watching how it worked out for him in a traditional store reinforced my conviction that future sales growth in my own business would be on line. In that respect 2013 was a better year than 2012.

In 2013 I passed the 1,000th feedback mark on eBay and retained a rating that was 100 percent positive. In 2013 I found it was easier to find buyers ready to purchase the more expensive items. I was pleased to make an increasing number of some bigger sales and my sales figures year over year edged upwards, not a lot but definitely in the right direction. The prices of items sold ranged from $7.99 to nearly $2,000, with most sales in the $40-$150 range. Despite being located in Hawaii and being in business here for more than 30 years, more than 90 percent of all my business came from outside the state and it looks like it’s likely to stay that way for the foreseeable future. None of my really good Pacific sales were made to buyers in the islands.