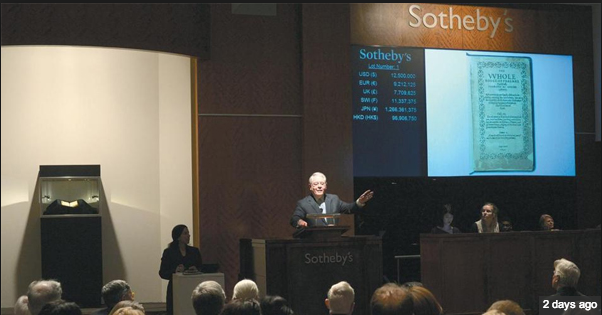 The Bay Psalm sells, doing well for all involved

On a cloudy evening in New York one star banished the night darkness, as a copy of the Bay Psalm, by price the most valued book printed in the New World, sold at Sotheby’s for $12,500,000 plus hammer for a total of $14,165,000.  It is a remarkable achievement for the firm, in particular for David Redden their Worldwide Chairman of Books & Manuscripts for Books who devised the strategy of making a deal for a guaranteed bid sufficient to win the item in exchange for a reduction in buyer’s commission.  The strategy was successful although the winning bidder was the second to bid, achieving a world record for a printed book sold at auction.  The initial guarantor, Steve Green of Oklahoma City, did not continue to bid once the bidding advanced.  The previous record, achieved with the sale of a complete set of Audubon’s double folio Birds of America in 2010 was $11,500,000.

The book has been on national tour in the months leading up to the sale.

A successful outcome has long been prophesied and the sumptuous catalogue issued for the sale indicated that a guaranteed bid had been given to the house.  Customarily the auction house gives some consideration for such an important early bid.

The book has been the property of the Old South Church in Boston and their Senior Minister and CEO has stated that the proceeds will be used for refurbishing the church, building the endowment and funding outreach programs.

The buyer is David M. Rubenstein, chairman of the Carlyle Group.  His name appears from time to time when storied material is sold at auction.  He purchased a 1297 Magna Carta at Sotheby’s in New York in 2007 for $21.3 million and more recently two copies of the Stone printings of the Declaration of Independence.  He is the Chairman of the Board of Duke University and contributed $13.6 million to their rare book and manuscript library that is named in his honor.   In 2011 he gave $5 million to restore the Washington Monument.

Bill Reese, the leading dealer of important and rare books in the United States called the sale “confirmation of the continuing importance of iconic material.  Great material resonates with the greatest collectors and they carry their commitments and enthusiasms on to future generations.”

Because the book was estimated $15,000,000 to $30,000,000 a few observers have been quick to say it did not achieve its full potential.  That is not true.  It achieved the highest price ever realized for a printed book.

Such results are not preordained.  Just a week earlier Christie’s offered an exceptionally important Thanksgiving proclamation signed by George Washington in 1789.  That document was estimated $8,000,000 to $12,000,000 but did not sell.