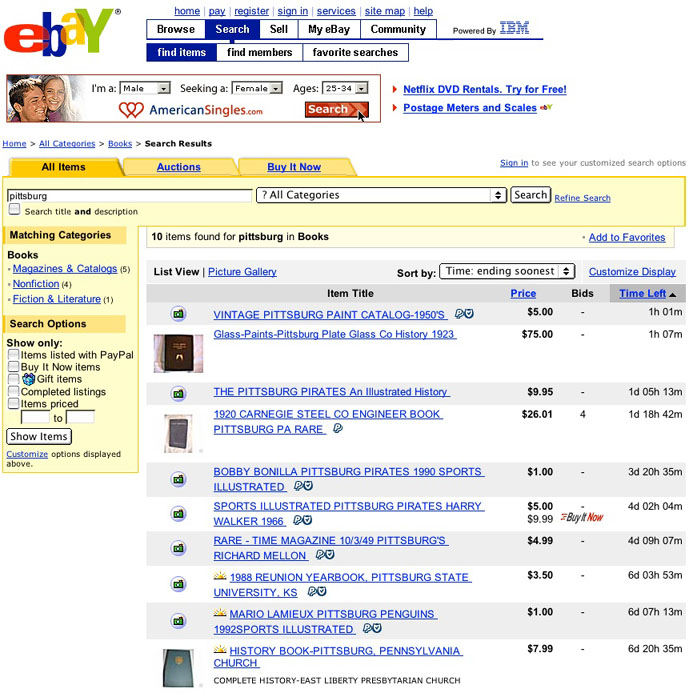 Can you spell Pittsburgh? Tucson? Manhattan? Lots of people can’t. They didn’t believe their fourth grade teacher when she said this was an important skill. Everyone will understand what city you’re describing when you write “Pittsburg” even if you leave off the final, silent “h.” Who cares?

Well, besides your fourth grade teacher, there’s a group of people prowling the deep recesses of eBay and they care a lot about your lousy spelling. In fact, they’re making money at your expense. This dirty little secret of eBay listings has received a fair amount of publicity lately, so we’re not telling anything out of school, but in case you missed it, here goes. Some people have trouble with their spelling, a misfortune that may help you find bargains on places like eBay by being a little sharper, or at least, a little more careful than they are.

This is how it works. Some seller has a wonderful and valuable old Pittsburgh imprint. Knowing that Pittsburgh collectors will undoubtedly want this book, the seller makes sure to include the name “Pittsburgh” in the book’s description, maybe even in the title. This will assure that any collectors cruising eBay for rare Pittsburgh items will find his listing. The problem is the seller is not a Pittsburgher or Pittsburghite or whatever people from Pittsburgh are called. So, without checking the spelling, he describes the book as a “rare and valuable Pittsburg imprint.” Now we can see the problem. None of those Pittsburgh collectors regularly searching eBay keywords for “Pittsburgh” will ever see this offer. It is invisible to them.

Meanwhile, a few clever vultures are circling above, watching for those weak spellers. A Pittsburgh vulture, aware that many people do not know that there’s an “h” at the end of their fair city, searches for Pittsburgh without the “h,” that is, the misspelling. Voila. There it is. “Pittsburg.” He’s ready for the kill. To put it another way, he’s ready to place an unchallenged low bid. He’s unchallenged because most Pittsburgh collectors, blinded by the misspelling, aren’t aware the item exists. The vulture’s low bid goes unchallenged, even though one of those other collectors would have been willing to pay more. He buys it for a bargain price.

If he’s a Pittsburgh collector himself, he has just made a coup for his collection. However, with a fairly common misspelling like this one, the chances are he’s a vulture with a list of misspellings he follows. He buys low and turns around and sells the same item on eBay after listing it under the right spelling. Now the real Pittsburgh collectors find it, bid up the price, and the vulture makes a nice middleman profit based solely on one contribution, spelling the word correctly. And, neither the original seller nor the ultimate buyer is any wiser, though the seller is a big time loser in this game. Now you know why Miss Spelling in fourth grade insisted it was important you learn to spell.