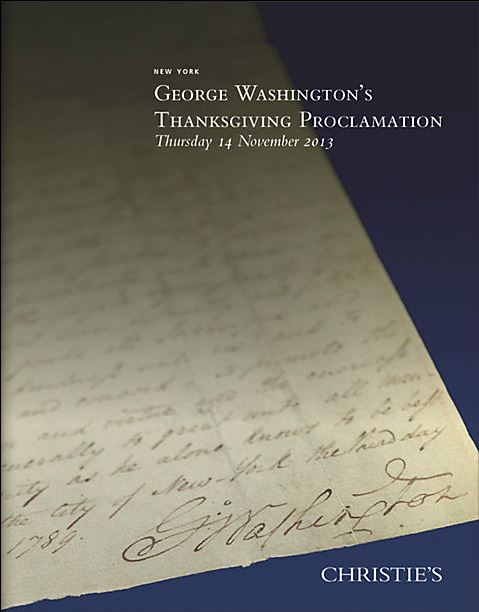 Growing up, the story I heard—and I imagine you’ve all heard—about Thanksgiving had to do with pilgrims and Native Americans coming together to share a feast in the early 17th century. As it turns out, Thanksgiving has more history behind it, and just in time for turkey day this year, you have the chance to buy a piece of it at Christie’s in New York on November 14th in a single lot sale of George Washington’s Thanksgiving Proclamation. I’ll warn you now, history doesn’t come cheap.

So we all know the story of the first, first Thanksgiving in 1621, after Tisquantum, aka Squanto, and his tribe the Wampanoags, helped the Plymouth Colony of pilgrims survive by donating food and showing them how to live off the land.  Contemporary accounts from the period, though limited as they are, do not specify a “thanksgiving,” while themes of gratitude towards God and to the Natives resonate. Therefore, it’s not surprising this first Thanksgiving is also not actually the first Thanksgiving. As Christie’s notes in their description, “The story of the Pilgrim Thanksgiving has prompted its share of debunkers over the years, who like to point out that it was not the ‘first.’ English settlers in Virginia held a Thanksgiving in 1610; French Huguenots conducted a Thanksgiving in Florida in May 1564; and the newly arrived conquistador, Pedro Menendez de Aviles, shared a thanksgiving feast with the Timucua Indians on September 8, 1565 in what is now St. Augustine, Florida. Texans enjoy pointing out the stone marker in their state that reads ‘Feast of the First Thanksgiving - 1541.’” Still, U.S. education has the majority of Americans believing Squanto’s feast was the first.

As for how the tradition of Thanksgiving continued after 1621, the rite of thanksgiving occurred periodically during colonial times and the Revolutionary War. The first recorded Thanksgiving Day in Plymouth happened two years later in 1623 after rain relieved a two-month drought. Those people were definitely full of gratitude. By 1630, an annual thanksgiving after the harvest in Massachusetts became common, and other colonies followed suit. This continued into the Revolutionary War when Congress recommended national days of thanksgiving, fasting, and prayer.

So where does Washington’s Thanksgiving Proclamation fit in to this story? And why is it estimated at $8,000,000-12,000,000? To start, the proclamation is not significant just to Thanksgiving’s history. It is significant to American history. It is the first presidential proclamation, and it came at a defining time for the fledgling nation, being the byproduct of the end of the first session of the 1st United States Congress. The Bill of Rights originated from this first session, and the President himself was inaugurated. With the full-scale deployment of the government, Washington (and the founding fathers) felt gratitude about “the peaceable and rational manner” in which the government had proceeded. Victory in the war was now six years old, and it had not always seemed clear the nation would know what to do with its independence. It was only after the Constitution was ratified, and with this first session of Congress winding to a close, that Washington allowed himself to correctly feel that a page had been turned. Thanks had to be given.

Did I mention the proclamation, while not written in Washington’s hand, is signed by him?

For more information as well as the E-Catalogue for the sale, please visit Christie's.
Editor's note:  Document seller Seth Kaller informs us that though this document is regularly described in many historical sources as the first presidential proclamation, there are two slightly earlier though less significant proclamations - Proclamation to the Southern Indians, 29 August 1789, and Proclamation on the Treaty of Fort Harmar, 29 September 1789. This error was ours, not Christie's.