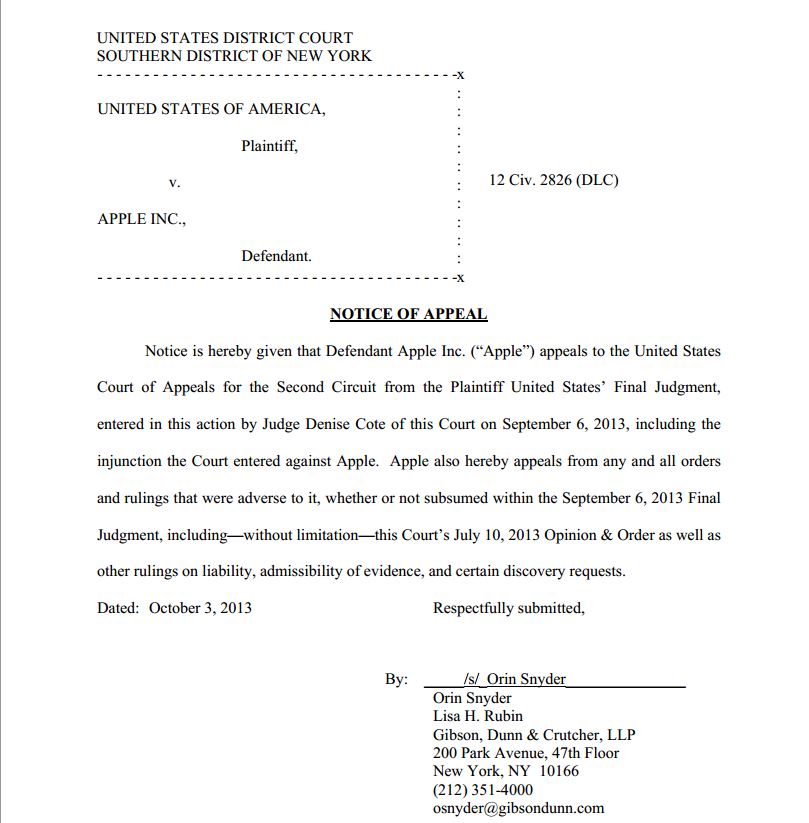 Apple files notice it will appeal.

Apple, Inc., has officially notified the U. S. Court of Appeals that it intends to appeal the judgment against it in the recent ebook price fixing case. Apple, along with five publishers, was accused of a conspiracy to fix the prices of electronic books by forcing Amazon to raise their charges to levels sought by Apple. Apple wished to join Amazon in selling electronic books online, but did not wish to join their rival in offering them for prices that left little if any room for profit. Amazon is focused on long-term market share, and is willing to forgo profits today for market share tomorrow. Apple wishes to have its cake and eat it too.

While agency pricing may sound like price fixing in itself, it is not. Publishers can force all retailers to charge a minimum price for their books. What they can't do is get together and all agree to adopt the agency model together. That is what the U.S. Department of Justice believed had happened when they all raised prices together, and the D.O.J. believed that Apple was a major instigator of the claimed conspiracy.

Ultimately, all of the publishers chose not to fight city hall. They all reached settlements with the D.O.J. Apple did not. Apple contended that it had done no wrong, that it had not conspired with the publishers to set prices. They fought the case in court. They lost.

The District Court ruled that Apple had conspired to fix prices. No monetary judgment has yet been set, but the Court did order a monitor be placed in Apple's headquarters to make sure they do not engage in such behavior again. Apple still believes it owes no damages, deserves no monitors. So, on October 3, they officially filed a notice with the Appeals Court of their intent to appeal.

Apple has not stated a grounds for its appeal. It has a few months to put the details together. However, they made sure to leave every door open, writing in the notice that it appealed against the injunction and “any and all orders and rulings that were adverse to it.” Some hints of Apple's claims may be gleaned in objections Apple earlier filed with the trial court. Apple claimed that various witnesses they believed helpful to their case were not permitted to testify, certain testimony was disregarded, and incorrect inferences were drawn. This will all undoubtedly come out in greater detail when the appeal itself is filed.

An unscientific perusal of articles by legal experts suggests that most believe Apple has a difficult challenge. The consensus appears to be that the decision was well-reasoned and facts clearly established. Nevertheless, Apple will undoubtedly be bringing the best legal minds to the challenge, and no one can better afford an appeal than Apple. Apple earns almost a billion dollars a week and has for a long time been struggling to figure out what to with all of its money. No matter how much it invests in the appeal, it will be barely a drop in the bucket. Having more money than you know what to do with is one of those unusual challenges most of us will never experience.