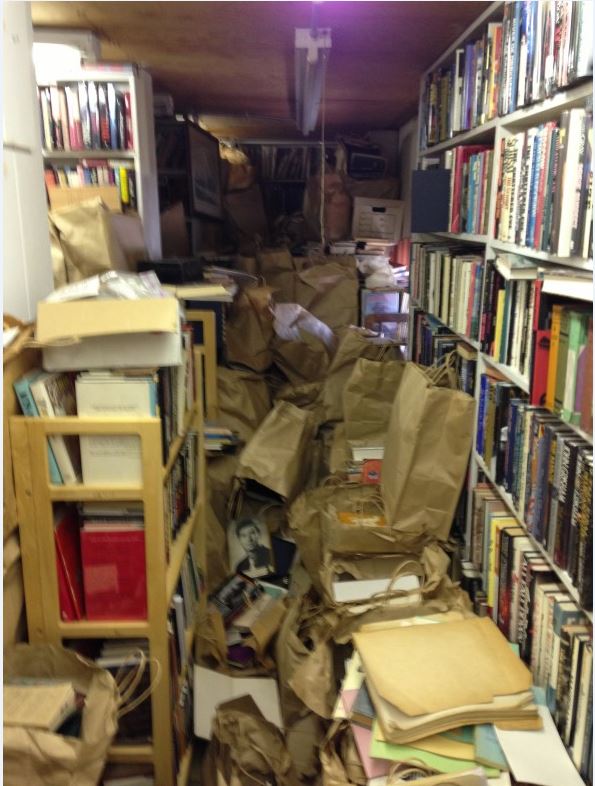 A view of the interior of Serendipity provoked the reaction: “Holy Shit.” Photo courtesy Scott Brown.

Move over Texas and load up the wagons Mother……here comes another really BIG book sale and at really LOW prices. This one is certain to generate a feeding frenzy. As the clock ticks down prices will fall from an already low $5 to a rock bottom $1.

Like the farewell tours of some of your favorite bands, the disposition of the inventory of the famed Serendipity Books in Berkeley, California, owned by the late Peter Howard goes on and on. Serendipity and Howard were best known for holdings in modern literature and related fields. This latest incarnation consists of 50,000 to 80,000 volumes. Other items in the shop such as art, ephemera and fixtures are also offered for sale.

The event begins November 9th and continues on weekends through December 15th at the store’s former location at 1201 University Ave (between Curtis St. & Chestnut St.) in Berkeley.

The 18-day extravaganza is hosted by Eureka Books (ABAA) whose final offer to buy the remaining inventory was accepted by the family of the noted bookman.

“We will be selling the remaining stock of one of the best antiquarian bookstores on the West Coast,” said Eureka’s Scott Brown, who is organizing the extravaganza. “There are so many books we can't even put them all out at first. We will be adding new books for many days. There are literally thousands of books originally priced over $100 that will be sold on the following schedule:

“We accept cash, credit cards and checks from people we know.” As for parking, it’s apt to be tight. Though the final decisions have not been made Brown thought that the small store lot would be reserved for customers loading up their purchases. Others, he said, should seek a spot on the street.

Brown, whose home base is in the Northern California coastal town of Eureka, confessed to being exhausted by the sheer size of it all. The decision to purchase came on the heels of many prior sales held since Howard’s death in March 2011.

After looking at some of the paperwork that came with the transaction Brown estimated they’d purchased the remains of more than 20 earlier shops that Howard had earlier acquired as their owners retired or left the trade.

When we bought this we knew it would be impossible to move it all, Brown said. Eureka took a lease on the Serendipity building through the end of the year, but definitely plans to be back at his own home base after that. This is absolutely the end, there is already another tenant for the space and “it will not be a bookstore.”

Trying to decide what they wanted to keep was a challenge. “We started going through it to pick out the things we wanted for ourselves. At first we picked just the limited editions with limitations of under 500. There were too many so we switched to under 200, still too many, so finally we took just the lettered copies.” He said Eureka would be taking just one van load home. The rest is offered for sale.

Reactions Vary: “From “Holy Shit!” to “Count Me In”

His wife initially reacted with dismay, adding “I think she’s gotten used to it.” Other responses were not so moderate. Brown wrote in his October 5 blog: “Jack Irvine, Eureka Books’ co-owner, was the first in the building. He picked up the keys one Saturday with his wife. Confronted by scenes like this, she reportedly wandered around Serendipity Books muttering ‘Holy shit!’ over and over.”

Peter Howard famously bought widely and he bought well. He bought so much he never had time to unpack a lot of it. A visit to Serendipity was always characterized by having to pry the bags and boxes away to see the books on the bottom shelves. At a buck a book count me in; I’m already shopping for my plane ticket.

Surely every dealer and collector who can get to Berkeley will be there. A sale of this caliber and at these prices has not been seen in living memory. And although it’s billed as the “Final Final Sale,’ it’s more likely this is only another beginning as the effects of the redistribution can be expected to ripple out through the book world for a long time to come.

For those hoity-toity types who think that it may just be a little too picked over for their refined tastes -- just remember this bit of wisdom from the old Siskiyou miner, “One man’s tailings is another man’s (or woman’s) gold.”

The noted California dealer at died in 2011 at the age of 72. His final inventory goes on sale at bargain prices in Berkeley on Nov. 9 to Dec. 15 under the auspices of Eureka Books. Read his obituary as published by ABAA at:

Read more about Peter Howard in this NY Times article published shortly after his death.

Contact AE writer Susan Halas at wailukusue@gmail.com. She plans to be in Berkeley from Dec. 11 to Dec. 16.