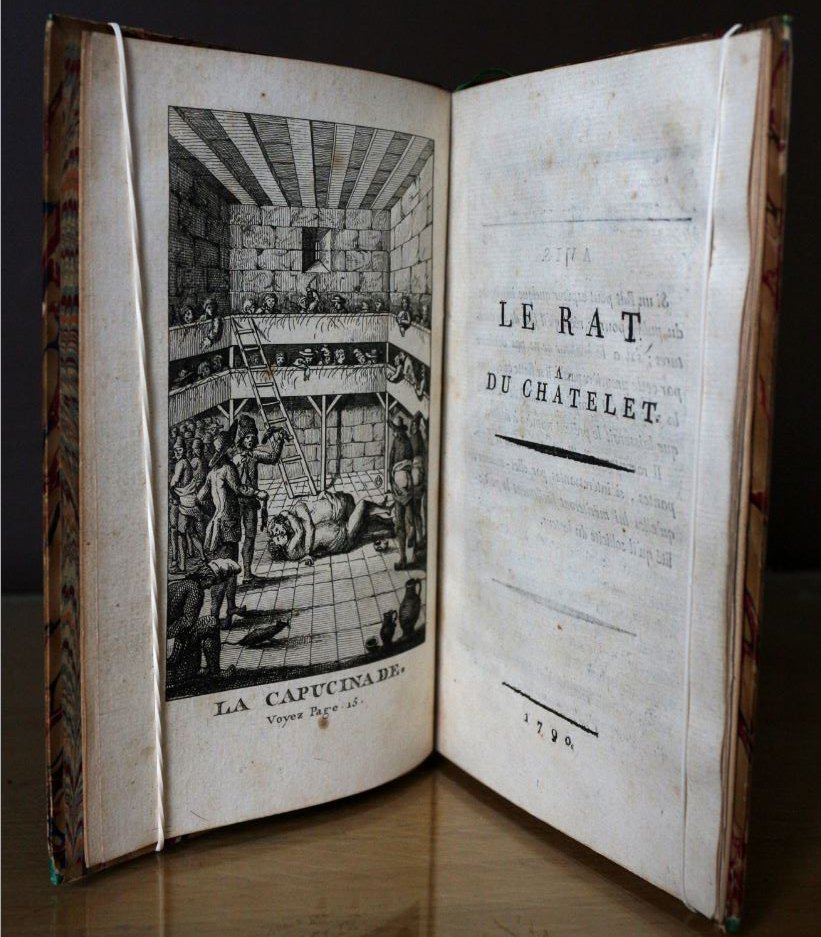 Just the other day, I came across an unusual book: 51 pages only, complete though incomplete, almost unknown but enjoying a certain popularity among a circle of connoisseurs and, last but not least, written by an anonymous rat.

This book is a political satire entitled Le Rat du Châtelet, or The Rat of Le Châtelet. It was published in 1790 by an anonymous writer—the title page doesn’t mention any printer either. A few months after the French Revolution (July the 14th, 1789), it was probably safer this way. Our writer transforms himself into a rat to crawl inside Le Châtelet, the scariest jail of Paris. At the time, this prison—now a mere square—sheltered the most vicious criminals; to such an extent that when the outraged people of Paris freed all prisoners on July the 13th, they made an exception for the 350 inmates of Le Châtelet. Famous people had been incarcerated (some even tortured) there before the Révolution, including François Villon—who allegedly wrote his masterpiece Frères humains inside—, Clément Marot or Louis-Dominique Cartouche. During the troubled times of 1789, the most virulent prisoners were still taken there, so our rat was crawling on thin ice. Let’s follow him into the dark underworld of Le Châtelet.

Traveling Le Châtelet with our rat is like visiting the kingdom of Hades: here, a lamenting ghostly Bankrupt lost in a remorseful loneliness; there, a stinking dormitory full of petty thieves with scabies; over there, some innocent citizens, victims of the guilty zeal of some newly converted revolutionaries. “Alas!” cries out our rat. “In which hands have we left the guides of our peace, liberty and rights? Who are those people, responsible for our safety?” Meet this man who, standing in a public gathering, carelessly uttered a word that sounded offending to the new Parisian Guard. He was called an aristocrat, arrested by a patrol and sent to Le Châtelet where Judge Dubois condemned him to suffer “three days of yoke,” and “to be whipped and marked, then sent to the galleys.” Fortunately, our inmate had connections, his sentence was commuted to a two-year imprisonment—lucky him! These stories might be true, or not. Names quoted in the book do not seem to fit reality, apart from the one Nicolas de Satou, identified as the aforementioned Judge Dubois.

It was dangerous to criticize the revolutionary government but crawling rats seldom bite. Refusing to be seen as a petty slanderer, our rat promises to name some monsters of infamy and others freedom mongers... shortly—meaning, in the second part of his diary. “If this first part happily entertains the reader, then his curiosity shall be rewarded by a second part.” Thus speaks the rat in the author’s note. But this second part never saw the light. Why? God only—and probably a little wet rat— knows the answer. Satirical writings were common at the time. Many were printed that were much more virulent. Let’s admit it, our rat wasn’t the most outspoken rodent of his time. But he knew what he was talking about as far as slang was concerned; and that’s the reason why this book is still sought-after nowadays.

Slang from Villon to Cartouche

At one point, our rat crawls among the rabble. “Was there any regout (problem)?” asks a prisoner to a newcomer. “Yes,” answers the other, “ I was fait (caught) while working the bauche (breaking a house); the marque (housemaid) crible au charron (shouted ‘thief’), bride the lourde of the longue (closed the door of the room), the mistringues (police) aboulent (arrived), they trimbalent (took me) to the cardeuil (police commissioner), they rapiote me (questioned me), but poitou (in vain); I had hidden my peignes (false keys) and my camelotte (booty). I did not reconnoblé (speak).” Some parts of this discussion remain unintelligible nowadays, even to a French-speaking person— and that was exactly the point. “Slang is the language of the purse robbers,” wrote Pierre Richelet in the 1706 Elzevir’s edition of his dictionary. “They express themselves in a way that made them unintelligible to anyone outside their cabal.” As soon as the 13th century, the police identified several slang words such as mouche (fly) for spy, or rossignol (nightingale) for picklock. In 1455, a bunch of criminals called the Coquillards (Scallopers, as they usually wore a scallop to join the pilgrims on their way to Santiago de Compostela in order to cheat and steal from them), were arrested. They revealed some of their secret words such as envoyeur (sender) for murderer, or vendangeur (grape-picker) for thief. François Villon had some acquaintances with the Coquillards from whom he borrowed the slang words of Le jargon et jobellin dudit Villon, first published in 1498.

Closer to our book, slang enjoyed a peak of popularity after Louis-Dominique Cartouche* was arrested in 1721. A few books were written about the life of this notorious gang leader of Paris that featured slang—the most significant one being the poem Le Vice Puni ou Cartouche (1725), a parody of Voltaire’s La Pucelle by an anonymous author later identified as Nicolas Racot de Grandval, who appended a slang dictionary of some 300 terms to his work. Cartouche was eventually sent to the Abbey-of-climb-it-with-regrets (the gallows, according to the said dictionary), but slang had become fashionable in the Parisian salons, and was more and more used until it was fully recognized by linguists in the 19th century.

Since the days of Cartouche, slang has been thoroughly studied and Le Rat du Châtelet is quoted in many serious works on the subject. Was our rat a thief himself? Did he serve some time at Le Châtelet? We will probably never know. The passage of his book related to slang is only four pages long, but happens to be well documented. It also features words such as abouler (to come quickly—still in use nowadays) or loffe (fool, that sounds like the backward-slang for fol—mad). These testimonies are here used in their historical context—that’s what makes them unique, and so valuable.