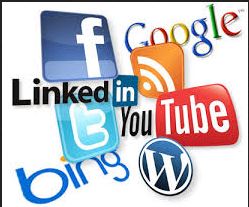 NB – Links to the people, businesses, sites and pages mentioned in this article can be found at the end of this story.

Last month I found myself reporting on a local event and noticed I was the only member of the press with a pen and pad, all the rest of them stood in the twilight pecking into their cell phones - furiously tweeting and blogging live time coverage.

As an older dealer, I’ve come late to almost every facet of the new technology. I’m a power seller on eBay, I have a personal Facebook page, but other than that I seldom see any real need to adopt the other forms, and certainly haven’t seen them as an important vehicle for business development.

But that experience made me wonder how the widespread use of social media has affected the world of book selling, and more importantly: Does it actually sell books and book related inventory?

Though what follows is by no means comprehensive, after a week poking around the internet and talking to younger colleagues who blog, tweet, pin, have multiple Facebook accounts in their personal and business names the answer is “Yes,” “No,” “Maybe,” “Sometimes” and “It doesn’t hurt.”

The most persuasive example of “Yes” came from Jennifer Johnson and her husband Brad of The Book Shop (ABAA) in Covina, Ca. She explained that living in the LA area the couple had ample opportunity to buy things inexpensively at the various flea markets in her region. But the new wrinkle from the sales end was when they decided to post “The Find of the Week” on her husband’s Facebook page and discovered that many of the items flew out the door.

Two of the examples she gave were a group of turn of the century “Wanted” posters and an exceptionally nice antique photo album, both of which found new homes almost as soon as they were posted.

“It took us by surprise,” she said, explaining that these were things that came in for low prices and went out rapidly, often to fellow dealers, for substantially more.

Johnson thought the key to the success of “Find of the Week” was having interesting material, multiple good quality photographs and a circle of Facebook friends who had similar interests. Another important consideration she mentioned was “not going overboard,” and limiting the exposure to truly unusual items that even at resale would be considered good value. She said they did not include a price in their post, but instead responded to inquiries and that inquiries were seldom long in coming.

A different take on the role of the social media came from another 40-something dealer on the other side of the country. Heather O’Donnell heads Honey & Wax, Booksellers in the Park Slope area of Brooklyn. Her two year old company focuses on unique copies and association items with an emphasis on literature.

O’Donnell is on Facebook, both as herself and as her business. She blogs, tweets and creates boards on Pinterest too. Not only does she have a good command of the tech tools, she has an enviable resume that includes prestigious academic, archival and rare books credits as well as seven years on staff of Bauman Rare Books in Manhattan.

O’Donnell did not think that these multiple social media formats were a direct link to sales, but she definitely found them beneficial. They enabled her to keep in touch with her bookselling colleagues in a convenient and nearly instantaneous manner. They also raised the visibility of her company and best of all, “they are free.” In her opinion, all of them were “worth doing but they don’t drive sales.”

She mentioned attending a conference in MIT on the Future of the Book where “everyone was tweeting in real time.” This, she said, allowed a much broader conversation than the one that was actually taking place in the room. In a similar vein, tweets from and about recent sessions of the Colorado Antiquarian Book School (CABS) coming from many sources “helped build community in the trade.”

She liked Pinterest because it focused on the visual and encouraged a more imaginative use of imagery.

Taken as a whole she finds social media a way of keeping in touch with a larger network of archivists, librarians, artists, dealers and collectors. “There’s nothing as effective as social media. It invites a larger conversation.”

There are hundreds, if not thousands of book bloggers and blogs by book sellers. My own favorite is Stephen J Gertz who writes from Los Angeles under the Booktryst banner. Year after year he comes up with interesting, unusual and well written content that is always accompanied by great visuals. Though Gertz is a book dealer he does not use his blog to sell books, though quite often the books he writes about do end up selling.

Gertz commented that bookseller blogs “are effective at raising awareness and profile of the bookseller/firm but to what degree I don't know. I do know, however, that booksellers who try to sell inventory through their blogs run the risk of appearing self-serving, which can turn-off readers.”

In his own blog he said, “I'll note at the end of a piece who's offering the book but will rarely, if ever, mention price - I want the reader to contact the seller and declaring price will often short-circuit that important step.”

“Most bloggers in the trade are fairly savvy about social media,” he continued. “Ultimately, however, content is king and if it isn't there all the social media ballyhoo in the world won't matter.”

As for Booktryst, Gertz said, “we feed through Twitter, Facebook, and StumbleUpon and leave it at that. You can go crazy and burn an enormous amount of time going through social media feeds and/or sharing other people's stories. I made a conscious decision to concentrate on best content possible written as best I can, build an evergreen archive, not get too sucked into the social media thing, be patient, and allow the site to grow organically on its own merits rather than heavily market though social media.

“It has been frustratingly slow but our growth seems to bear the strategy out. I've always looked at this in the long term. I've slowed down recently to three times a week (more if I can) but the initial tactic of relentless publication of quality material laid the foundation for Booktryst's success; it became unavoidable and now when people search for info on a particular book or whatever Booktryst displays within the top results.

“That's why things we've posted in the past often get rediscovered and then gain hundreds of - sometimes a thousand + - new readers. I've had colleagues tell me that when researching something they came across a Booktryst piece and used it as a guide when cataloging. That's very gratifying. When an item sells as a result of Booktryst coverage I'm over the moon. I get a lot of satisfaction selling something strictly through the power of the written word; I'm shyer than most people think and, while I'm fairly good at it, do not really enjoy direct sales.”

“Ultimately,” he said, “bookseller blogging is all about building a relationship with readers and converting them to customers who've come to trust your word. In a world where price has become almost everything (and developing customer loyalty is an ongoing challenge) that may be bookseller blogging's best reason to exist: In the vast space of the Net, it's a way to get to know an otherwise faceless bookseller as a person with a voice you enjoy and can depend upon.”

Tried and True – No bells, no whistles, but it works

I’ve written before one of the most effective venues for actually SELLING books is the list serve moderated by Lynn DeWeese Parkinson (a man) based in Tijuana, Mexico. He is a specialist in Latin America and is affectionately dubbed the “Poohbah,” a self-bestowed title with a Gilbert and Sullivan overtone. This is a bare bones email operation. It has no pictures, no attachments and all listings are in plain text. Though it is known formally as the Bibliophilegroup.com, it is more frequently just called the “bib list.”

It offers a free introductory two week trial subscription. Those who join pay a subscription fee of $30 a year. There are no other charges or commissions associated with this list.

It has about 1,000 members, of whom about 100 or so are frequently posters and the rest a surprising array of bookish lurkers. Those who belong can post for sale, wanted and auctions. There is also much sharing of information on book related topics, events, as well as occasional heartfelt rants and raves. It’s not fancy but it actually works, and has worked for a long time. Buyers and sellers from all ranks of the book world can be found here. The exchange of information is excellent and it is for the most part troll and flame free with a code of conduct that is enforced. As a subscriber for many years I have always found it a profitable and congenial group. Contact info at end of the story.

Meanwhile at the low end

Though AE readers tend to gravitate toward the upper strata of the selling and collecting book world, it’s important to remember that there is an equally large and vigorous pool of sellers who are hunting for used books for resale and their primary venue is Amazon.

I read one blog that I found particularly interesting because it detailed exactly what a pair of new sellers experienced in their attempt to learn the used book business, including what they bought, what they paid and what actually sold.

In an earlier day they would have been called book scouts, an occupation that seems to have largely vanished. Their experiences are an interesting read, and their the passion and enthusiasm they bring to learning the bottom rungs of the business is encouraging.

A link to their blog and other people sites and pages follows.

As his blog Book Tryst

Blog about learning the book trade from the bottom up

Selling used books on Amazon – The journey of a new on-line bookseller. This blog was undated, so I can’t tell if it’s recent, but it certainly goes through the basics in a very factual manner.

Susan Halas writes for AE Monthly about topics of interest to booksellers. Reach her at wailukusue@gmail.com. She welcomes your comments and story suggestions.