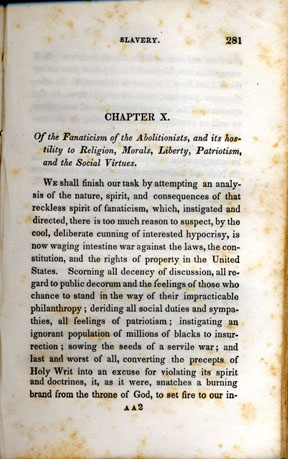 SLAVERY IN THE UNITED STATES
By J. K. Paulding
Published in New York in 1836
CHAPTER X.
Of the Fanaticism of the Abolitionists, and its hostility to Religion, Morals, Liberty, Patriotism, and the Social Virtues.
6,789 words
WE shall finish our task by attempting an analysis of the nature, spirit, and consequences of that reckless spirit of fanaticism, which, instigated and directed, there is too much reason to suspect by the cool, deliberate cunning of interested hypocrisy, is now waging intestine [sp] war against the laws, the constitution, and the rights of property in the United States. Scorning all decency of discussion, all regard to public decorum and the feelings of those who chance to stand in the way of their impracticable philanthropy; deriding all social duties and sympathies, all feelings of patriotism; instigating an ignorant population of millions of blacks to insurrection; sowing the seeds of a servile war; and last and worst of all, converting the precepts of Holy Writ into an excuse for violating its spirit and doctrines, it, as it were, snatches a burning brand from the throne of God, to set fire to our institutions and consume our Union to ashes. Still worse than this, if possible. By thus prostituting the Old and New Testaments to sanction its mischievous purposes, and by using them as the sponsors of its war against our social institutions as well as constitutional safeguards, it is making religion itself so odious in the eyes of rational and temperate men, that it is to be feared they may be wrought upon to abjure a faith thus at war with the laws and institutions of society, and seek refuge from the red-hot fires of fanaticism in the chill, dark caverns of frozen unbelief.

The Bible, as understood and acted upon for ages, is no longer the settled rule of faith to those marauders and moss-troopers of religion, who pay no respect whatever to venerable interpretations grown gray in the lapse of time. Its morals are not sufficiently sublimated for the exquisite squeamishness of modern philanthropy; and it would appear that God himself has changed, since he stood on Mount Sinai in all the majesty of Omnipotence, and gave laws to the universe. The sect of fanatics has no rule of faith; no standard authority; no teacher, whose lessons are hallowed by the belief of ages; no pastor, who seems to have any guide but his own wild vagaries, or any other restraint but that of his own consummate arrogance.

Every day the path of our duties is beset with new thorns and briers, and becomes more difficult to pursue. The yoke of religion is waxing more heavy and galling, and, as a natural and inevitable result, men are beginning to cast it off as too intolerable to be borne, or resorting to hypocrisy to cloak their apostacy. It is much to be feared, that if the tyranny of fanaticism continues much longer, the Christian world will be divided into two sects, namely, fanatics, who believe every thing, and infidels, who believe nothing. Let us once more return to the good old fold, where the shepherd was not the tyrant, but the teacher of his flock; where the sheep were permitted to indulge their innocent gambols, and where, if sheared at all, it was only once a year. It is time, and high time, that there should be some strong effort among rational and pious men to restore the prostrated landmarks of our rights and our duties; to reinstate the God of Moses and the Saviour of mankind in their ancient dignities as the Lawgivers of Christians, and to rescue our people, most especially our mothers, wives, sisters, and daughters, from the delusions of fanaticism. It is for this purpose we have come forth to give our humble aid, in pointing out the consequences of these daring and licentious innovations on the ancient rules of our faith, and the established principles of our government.


"We maintain that no compensation should be given to the planters emancipating their slaves. We regard as delusive, cruel, and dangerous, any scheme of expatriation which pretends to aid, either directly or indirectly, in the emancipation of the slaves, or to be a substitute for the immediate and total abolition of slavery. This relation to slavery is criminal and full of danger; it must be broken up.

"We shall organize Anti-Slavery Societies, if possible, in every city, town, and village of our land. We shall send forth agents to lift up the voice of remonstrance, of warning, of entreaty, and rebuke. We shall circulate, unsparingly and extensively, anti-slavery tracts and periodicals. We shall enlist the pulpit and the press in the cause of the suffering and the dumb. We shall aim at a purification of the churches from all participation in the guilt of slavery. We shall encourage the labour of freemen over that of slaves, by giving a preference to their productions, and we shall spare no exertions nor means to bring the whole to a speedy repentance.

Of all the forms under which fanaticism has appeared, that assumed by the abolitionists is the most dangerous to the existence of civil government and the principles of liberty, in their enlarged and liberal construction. Having, at a meeting in the city of London, denounced the Colonization Society as a cheat and a hypocrite, they commenced their operations in the United States, in the city of Philadelphia, by organizing a National Anti-Slavery Society, which began its career with a declaration of exterminating warfare against the people of the South, the rights of property, the majesty of the law, and the Constitution of the United States. That our readers, who perhaps have never seen this celebrated manifesto, may judge of the tone, temper, and objects of the society, we here insert it at full length. Its positions, it will be perceived, are as little encumbered by argument as they are embarrassed by modesty; and the language is such as only arrogant, conceited, ignorant, and impudent impostors, or foaming madmen would dare to address to their countrymen.

"We maintain, that in view of the civil and religious privileges of this nation, the guilt of its oppression is unequalled by any other on the face of the earth;—and, therefore, that it is bound to repent instantly, to undo the heavy burden, to break every yoke, and to let the oppressed go free.

"We further maintain, that every man has a right to his own body, to the products of his own labour, to the protection of law, and to the common advantages of society. It is piracy to buy or steal an African, and subject him to servitude. Surely the sin is as great to enslave an American as an African. That every American citizen who retains a single human being in involuntary bondage is, according to the Scripture, a man-stealer; that the slaves ought to be instantly set free, and brought under the protection of law; that all those laws which are now in force, admitting the right of slavery, are, therefore, before God, utterly null and void; being an audacious usurpation of the Divine prerogative, a daring infringement on the law of nature, a base overthrow of the very foundations of the social compact, a complete extinction of all the social relations, endearments, and obligations of mankind, and a presumptuous transgression of the holy commandments; and that, therefore, they ought to be instantly abrogated.

"We further affirm, that all persons of colour who possess the necessary qualifications which are demanded of others, ought to be admitted forthwith to the enjoyment of the same privileges, and the exercise of the same prerogatives, as others; and that the paths of preferment, of wealth, and of intelligence, should be opened as widely to them as to persons of a white complexion.