Selling the Collection - No Easy Answers 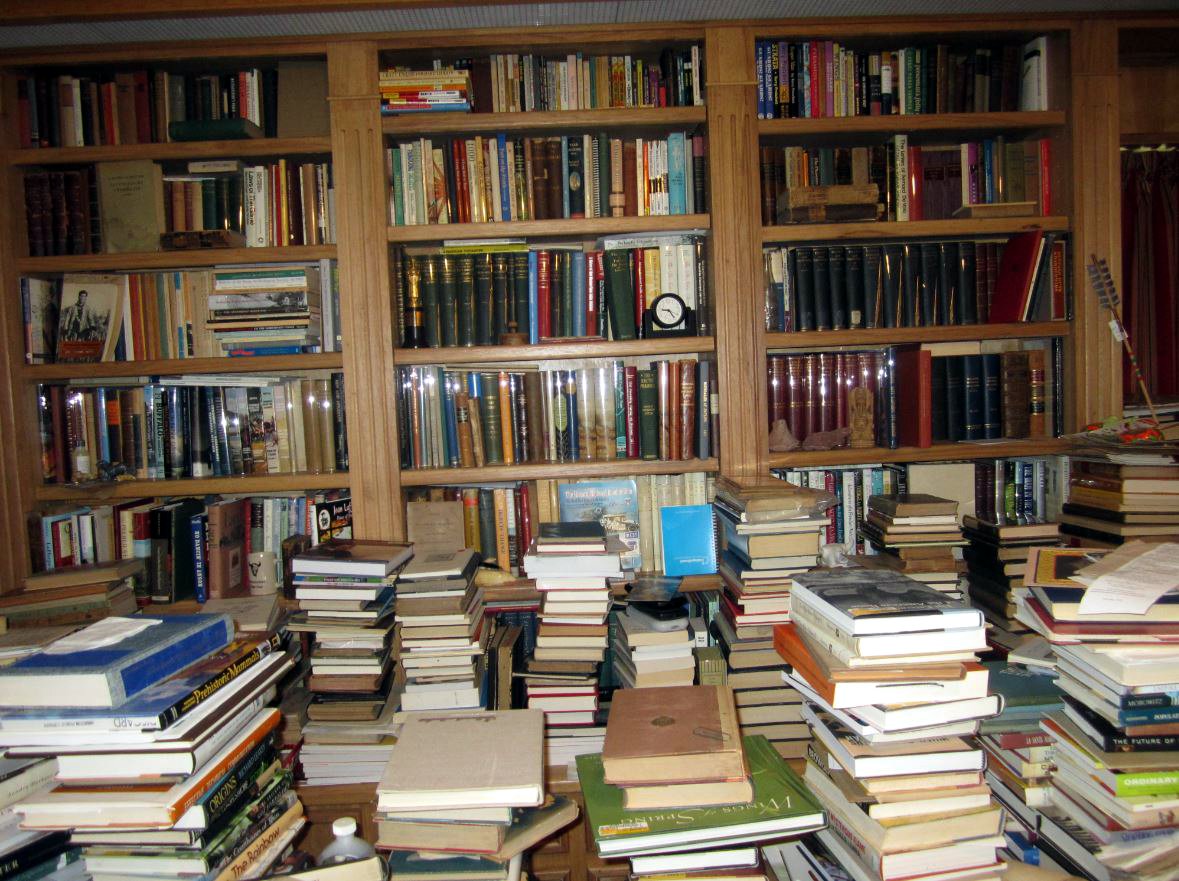 This is a small portion of the holdings of one older collector who finds “letting go is the hardest part.”

This month’s article is the outgrowth of a query to an on-line list-serve populated mainly by book dealers. No long ago the following post was received:

“Suppose for the moment that you are a "civilian" with a large accumulation of books, gathered over many years. Now it's time to dispose of the library. How would you go about doing it? What actions on your part or features of the collection would be most likely to make it salable or attract the attention of knowledgeable dealers?

“What should a seller do to dispose of a collection at reasonable prices?

“This is not entirely a rhetorical question,” the writer continued. “A neighbor of mine has spent his career as a professor of philosophy. He is now in his mid-80s. He has hinted that he might want me to give him some advice or help him dispose of his library ‘when the time comes.’ He has never been a real ‘collector’ but has been a prodigious accumulator of books for more than 60 years.

“Most of his house is stuffed with books, almost all non-fiction; I would estimate 8,000 - 10,000 volumes. It's heavy on philosophy, mostly ethics and esthetics, only a little epistemology or political philosophy. … He has never attempted to catalog his books -- as he says, ‘I know where everything is.’ All volumes are neatly shelved, and readily accessible. His books range from as-new condition to heavily-used.

“We have no used/rare/antiquarian dealers within 100 miles, except for a Half-Price Books store which is completely unable/unwilling to deal with this volume of books, especially in these categories. What do I tell him? That his books are worthless, or that dealers will offer him pennies (or less) on the dollar for his library? ….

“Although I have couched this inquiry in terms of my neighbor's books (a real case), the same or similar questions will eventually apply to my own collection. I have more volumes, and have focused more on acquiring rare and collectible items, but the same difficulties apply.

“There are no nearby dealers. Most of the specialist dealers with whom I have worked over the past half-century are dead, retired or trying to retire.”

The writer of this post, turned out to be a 70 year old professor emeritus at a large American university, who asked to remain anonymous. He estimated his own holdings in “Western Americana” from the Coronado Expedition to the 1840s might be 12,000-18,000 volumes. Though he is in good health and people in his family lived to “their 80s or 90s,” he knew the day would come when he’d need to sell.

His situation is far more common than might be expected. AE receives similar inquires quite frequently. Almost immediately he made several comments we’ve heard before including:

* “Letting it go is the hardest part.”

* “What I’d really like is a good home, a place that will take good care of it.”

Like many who face the prospect of selling he’s torn between conflicting emotions. On one hand, he really doesn’t want to sell at all, on the other he hopes both to recover a good portion of what he’s spent and at the same time place it with “another individual who cares for it as much as I do… someone I could pass it on to ….sooner or later it’s got to pass.”

How much is his collection worth? Well that depends. This collector gave an estimate in the low six figures, but whether he will be able to realize that amount, or even a fraction of it, remains to be seen.

Probably nobody hears more stories like this one than AE Monthly publisher Bruce McKinney. McKinney is an ardent collector himself who has successfully sold some of his earlier holding. As such, he is frequently asked for his advice. He outlined the usual options: sell it all to a dealer, find an auction house that will take it, put it out on consignment or work with an institution.

He then proceeded to give a variety of reasons that all of these possibilities might be less than ideal from the seller’s point of view.

Looking at the auction option he observed that many sellers experience what he termed “auction anxiety.” The theory is, he said, “that a book is a book is a book,” and at least hypothetically the same item should bring a similar price if offered in a comparable setting, but, he explained, it seldom works that way. “A book that brings $800 in one auction can bring $2,500 at another.”

This kind of variable combined with a long time line and the unknown outcome create a tense situation. And then the auction houses can be very particular and selective. It may be hard to place your material, and the chances of all of it going to one place, in his opinion, were unlikely. He observed that auction houses seldom want the whole collection, only the highlights. It’s often the case that the majority of the value is found in only a handful of items.

Turning to institutions he noted that here the time lines and process can take years and that today’s special collections are often reluctant to commit to acquisition and care of materials where there is significant duplication of what they already own. That’s before we even get to a discussion of price.

As for dealers, McKinney pointed to an increasing reluctance to buy - i.e. spend their own money and an increasing trend toward consigning because “nobody really knows” where the market for books is going. And though consignment terms are negotiable, often time the seller ends up feeling “he’s been had” and because terms of consignment may not be well defined, the dealer sometimes shares those sentiments.

Add to the mix that the seller’s own ideas about the value of his holding is based on what things might have been worth in years past, but is often not realistic in light of the current market.

Said McKinney, “They can not bring themselves to believe they’re not going to get those prices today. Today’s price is often going to be lower. They’ve got to adjust their expectations.”

One new option he mentioned was a recently formed group called Collectorsfolio. This firm bills itself as a specialist in collection development. It also offers fee-for-service cataloging in digital format.

On the sell side it provides brokerage services for high end books - similar to the representation provided by a real estate agent. The present commission schedule quotes rates that in the book trade would be considered quite modest. One reason for that is the dealer has none of his own money tied up in the venture. McKinney sees this combination as “the new model.”

Jeremy O’Connor, 39 and Michael DiRuggiero, 41, are co-founders Collectorsfolio. It is an outgrowth of their firm Manhattan Rare Book Company (ABAA) in New York City which has been active in the trade since 1999.

According to O’Connor, Collectorsfolio is still in its early stages and came on-line this summer in a beta version. The concept, he said, “is a result of our conversation with our clients and their needs.”

On the cataloging side Collectorsfolio works with collectors to help create a digital file that can be converted to on-line use or can be printed. He said that charges to create these documents have so far ranged from a few hundred for inserting professionally taken photos into a Word file up to $5,500 dollars for a more soup-to-nuts approach for a catalog of Modern First Editions. The fee depends on the number of items, whether a basic list already exists, the complexity of the photography and a variety of other factors.

Once a digital document is prepared it can be a useful marketing tool for the seller, and give him “more leverage.” If desired Collectorsfolio can also act as a seller’s broker for a flat percentage which O’Connor quoted as “15 percent of items selling for up to $5,000 and 10 percent for books sold above $5,000.”

O’Connor thought that “the best owner for a book above $5,000 is a collector, with the dealer to act as agent for the prior owner.” Collectorsfolio always takes possession of the book before the transaction is completed. The difference between a dealer and a collector, he said, is ‘I never met a dealer who loved a book more the longer he had it.”

This writer, a dealer’s daughter and a dealer herself for more than 30 years, is only too familiar with the collector’s dilemma.

To realize top dollar takes planning, cataloging and usually a time line of several years. It requires realistic expectations and finding the right vehicle - be it auction, dealer, internet, institution or combination of any or all to achieve maximum value.

Asked for an opinion, I recommended first selling duplicates, then culling books that were no longer as interesting to the collector as they might have been in the past and selling those next, if only to get used to the idea of “selling.”

I also suggested using eBay as a very low cost vehicle to showcase attractive items as bait to find buyers who shared similar interests and had the financial resources to afford them.

The worst scenario is to do nothing and let time take its course. When a collector dies, the wives and families are seldom equipped to handle the disposal of the books that have been so lovingly accumulated.

Then the collection goes from being a treasured asset to a burden that needs to be liquidated and rapidly. The distress model yields the lowest prices and frequently brings turmoil to the heirs who in most cases know little or nothing about books or how to sell them.