End of a Love Affair: Art from the Collection of Mrs. T. S. Eliot to be Auctioned This Fall 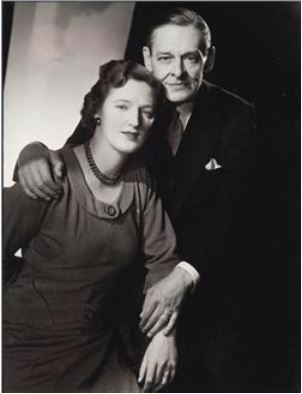 A major art auction is scheduled for November 20 at Christie's in London, and while we normally don't write about art auctions, this one has a connection to books. The collection arose from the work of one of the most notable of 20th century poets, T. S. Eliot. The collection belonged to his wife, Valerie Fletcher Eliot, who died in November of last year.

Huh? His wife just died? Hasn't Eliot been dead forever? The answer is yes, he has. And, if this had been his first wife, she would have been 125. The sly “Old Possum” won the heart of a much younger lady late in his life. Actually, he didn't have to do much winning. His poetry did it for him, and she figuratively, if not literally, threw herself at his feet. Surprisingly enough, this was not a gold digger romance, but one of great love and devotion, the only unfortunate part being it couldn't last for long. And, while the second Mrs. Eliot became quite wealthy as a result, it was only because of an unexpected turn of events several years after he died.

T. S. (Tom) Eliot's life was complicated. He was a complex man. In other words, it wasn't all that happy. He married his first wife, Vivienne Haigh-Wood, in 1915, a few months after meeting her. They were both 27. He imagined she would fill some void in his life. He apparently had never had much of any relationships with women, so there was one role right there. She also was a vivacious, attractive woman with a large personality. That also filled a need since Eliot was more of a repressed, somewhat dull person. His personality was in his poems, not his persona.

Vivienne suffered from all sorts of illnesses, both physical and mental. The physical problems required much care, and “Tom” seems to have been fairly attendant to them through the first decade and a half of their marriage. However, he became increasingly disinterested and distant from her. The growing mental issues, which would result in her being institutionalized the last decade of her life, certainly didn't help. She became too much for him and he wanted separation. She, on the the hand, admired him, and wanted to take care of him, even if she was the one who more needed the care. It was a mess.

In 1927, Eliot, who was born a Unitarian, converted to the Anglican Church. This seems a bit odd under the circumstances. Though born in America, Eliot spent most of his adult life in England, and this would have been more suitable to the social circles in which he traveled. Nonetheless, membership in the Anglican Church made divorce much more difficult. Eliot quickly reached the point where he never wanted to see his wife again, so why he might have wanted to force himself to remain married to her is hard to figure. Perhaps it protected him from marriage to others. There were other women who wished to marry him, though again probably more for his poetry than his personality.

In 1932, he accepted a one-year appointment to teach at Harvard. He didn't take his wife. While away, he had his solicitors send her a letter stating he intended to separate. Tom was quite the romantic. When he returned, he did everything imaginable to avoid seeing her. He was quite successful at it. He hid where he lived and had his secretaries protect him where he worked. In the last 15 years of their marriage, she saw him only once, despite repeated attempts to reach him. That came at a lecture/book signing. She sneaked in. She spent the evening staring at him adoringly, and at the end, brought a couple of books to be signed before him and asked if he would come home with her. “I cannot talk to you now,” he replied. That was it, their only personal communication in the last 15 years of marriage. However, it should be noted that he did sign the books for her.

In fairness to Eliot, she was becoming more and more deranged and beyond his capacity to handle. In 1937, her brother had her committed to an asylum. The final act came after he had to retrieve her wandering the streets of London at 5:00 a.m. She was asking whether her husband had been beheaded. We know she wasn't thinking straight, for if she were, she would have known that the guillotine was a French thing. Vivienne remained in the institution until she died ten years later.

Having separated from his wife, Eliot became involved in two very long term relationships. One was with an American woman in whom he was interested before he was married, and was reportedly as dull as he. The other was a more interesting British woman. The relationships apparently were strictly platonic. Each of the women was highly desirous of marriage, the British one reportedly proposing to Eliot three times. He demurred. So, it was with great surprise that in 1957, he up and married Valerie Fletcher.

Valerie was terribly smitten with Eliot from afar, which was perhaps the only way to become smitten with him. She fell in love with his poetry and transferred those affections to him personally. Having heard his poetry as a school girl, she declared either that she would work for him or marry him (I have heard it described both ways). Whichever she said, it came to pass. In 1949, she got a job as his secretary at Faber and Faber, the publishing house where he had a day job through most of his career. In 1957, they married. Eliot was 68, Miss Fletcher 30. Rounding off, that's almost a 40 year age difference.

Surprisingly enough, it turned out to be a wonderful marriage. Eliot remained the poet in Valerie's eyes, not an old man in declining health. Valerie was the perfect homebody wife for the intensely private Eliot. She said they would stay home, make dinner, and play Scrabble. For Eliot, who had endured the public spectacle of his first wife's eccentricities, this was exactly what he wanted. Valerie later observed that he couldn't have died in peace without this marriage. The only shortcoming would be its inevitable brevity. Eliot died in 1965. They had 8 years of marriage, while Valerie had 47 years of widowhood. She devoted those 47 years to his memory.

She was in charge of his estate. Eliot wanted no biographies, so she cooperated with no biographers. She published his letters, of which there were many, slowly, some still not released. Her interest was in protecting his wishes and reputation, not enriching herself. She might never have had the money to amass this fine art collection but for a twist of fate. Valerie was approached for permission to use Eliot's atypical book, Old Possum's Book of Practical Cats, a humorous book of verse about cats, for a musical play. She saw no harm to Eliot's reputation in this project. She consented. The book was the basis for Andrew Lloyd Webber's enormously successful play, Cats. It ran for 21 years in London, 18 on Broadway. It made an enormous amount of unexpected money for Valerie. Eliot's practical cats proved to be of unimaginable practical benefit to Eliot's wife. He undoubtedly would have been very pleased.

The collection will be auctioned at Christie's on November 20. The official title of the sale is A Life's Devotion: The Collection of the Late Mrs. T. S. Eliot. Mrs. Eliot collected British art, and the collection is likely to prove to be worth many millions of dollars. It includes over 200 portrait miniatures, an art form mostly supplanted by the development of photography. Some go back to the time of Queen Elizabeth I. There are also numerous watercolors, drawings and prints, including many 20th century works. One by Winston Churchill could bring close to $1/2 million.

Neither of the Eliots had children. Proceeds from the auction will go to fund Old Possum's Practical Trust, which Mrs. Eliot created in 1990. Its stated purpose is to “support literary, artistic, musical and theatrical projects and organisations.”