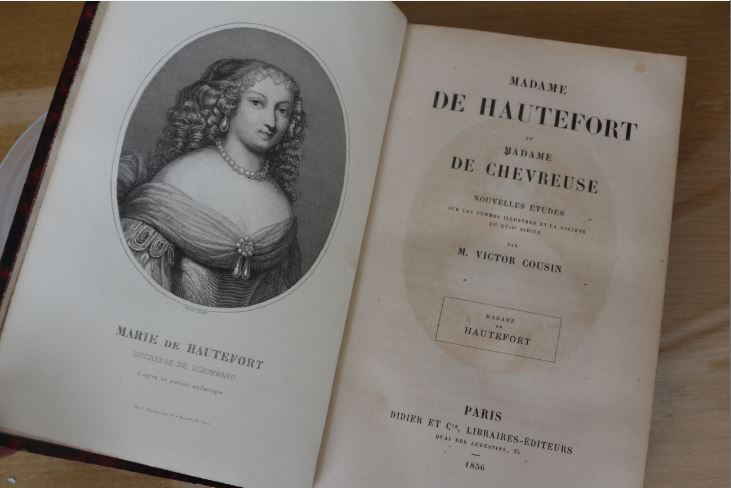 In France, when there’s a castle—or a church—there’s an old book not far away. Rich people and religious people have indeed been the guardians of arts and culture for dozens of centuries. There lay the beauties of a chaotic world populated by barbarians and illiterate creatures. Just the other night, as I was about to enter the castle of Hautefort, one of the most magnificent castles of Dordogne, I was welcomed in front of the contemporary drawbridge by a beautiful young actress dressed in the 17th century fashion. She introduced herself as Marie de Hautefort. Her name is quite familiar to historians as she was one of the favourites of Louis XIII in her time. As a devoted Dame d’Atours of Queen Ann of Austria—Louis XIV’s mother—she even played an important role during the troubled reigns of Richelieu and Mazarin.

As I came back from this visit, I soon found out that Madame de Hautefort, by Victor Cousin, was the authoritative biography of this lady. The first edition came out in 1856 in Paris, illustrated with a very nice portrait. The book itself is part of a series dedicated to some influential women of the 17th century. “The noble person we’re about to talk about,” warns the author, “does not belong to the political history of her time; she did not fight against the two great Cardinals (Richelieu and Mazarin) of France; she simply refused to sell them her soul, and to betray her friends and a cause which appeared virtuous to her.” This was already quite enough to run into serious trouble! Marie was born in 1616, in a castle that has sheltered many famous people over the years, such as Gui le Noir, Latours—who earned the nickname le Grand (the Great) during a crusade—or the warrior and poet Bertrand de Born. All through the 15th and the 16th centuries, the castle stood as a rampart against the English troops.

Marie lost both her parents at a very young age and was raised by her grandmother, Mme de la Flotte Hauterive, who eventually took her to Court when she was only twelve. She was beautiful and, as it seems, very well educated—she soon became a fille d’honneur of Marie de Medicis, the mother of Louis XIII. Victor Cousin quotes her first—and not that easy to corner—biography, written by the Duchess of Montmorency (1799): “This charming young lady was introduced to the Court at fourteen, where she soon earned the nickname of Sunrise.” She met the King at Lyon, who fell in love with her and who appointed her to the service of his own wife, Queen Ann of Austria. The Queen reluctantly welcomed the favourite but soon found out that she was a virtuous and a loyal young lady. Furthermore, Louis XIII was not an ardent lover. According to the testimonies of the time, including La Rochefoucauld’s, his love for Marie de Hautefort was strictly platonic. Cousin reports an interesting scene involving the King, his wife and Marie de Hautefort. Caught by the King while reading a confidential letter, Marie had no choice but to slip it between her breasts to keep it out of reach. The Queen laughed and held Marie’s arms in her back, urging her husband to go for the letter. The King dared not touching Marie and, failing to retrieve the letter with a pair of pliers, left the room—far from his father Henri IV, indeed.


In his preface, Victor Cousin confesses that he read a few authoritative books including the Memoirs of La Rochefoucauld: “I had a deep friendly relationship with Mlle de Hautefort who was young and surprisingly beautiful,” writes the author of the classic. “She was virtuous and a very faithful confidant; she was close to the Queen and an enemy to the Cardinal” de Richelieu. In fact, La Rochefoucauld fell in love with Marie, only to become one of the first victims (cf Cousin).

The Queen started to plot against her husband and his master, Richelieu, by exchanging compromising letters with her brother Philippe IV, as France was at war with Spain. Richelieu’s secret police soon revealed the conspiracy and the Queen had to give some explanations. In order to make sure she would tell the truth, Richelieu had a certain La Porte arrested—book lovers know La Porte quite well, as he left his colourful memoirs: he was the one who had carried the incriminated letters, and his confession had to match the Queen’s.

The Queen had belittled her implication and La Porte’s confession had to reveal certain things, and to hide others. How could they agree on what to say when La Porte was jailed in La Bastille under tight scrutiny? That’s where Mlle de Hautefort intervened. “Mme de Hautefort did all she could to help the Queen,” writes La Porte. “She could have lost everything. But she was so passionate for her Queen that she did not hesitate (…). She faced some terrible dangers to help her out.” Through a friend of her, Marie de Hautefort got in touch with a Commander of La Bastille, De Jars; one night, she surreptitiously left the Louvre under disguise, then went to talk to De Jars at La Bastille. The Commander was hesitant, as his implication could have cost him his life. “What? Are you hesitating?” said Mme de Hautefort. “What would happen to me, if someone should find out about it?” De Jars could not resist the persuasive young lady but he couldn’t talk to La Porte directly; he decided to contact some prisoners from the top floor of the tower. They lifted a stone from their floor, asked some croquants—or rebellious peasants—from Bordeaux, who were jailed below, to do the same. They then reached the cell of the Barton of Tenance who himself dug a hole in the floor of his cell to give access to the cell of La Porte! The prisoner soon knew exactly what to say and the accusation never went too far.