Death Comes to the Telegram 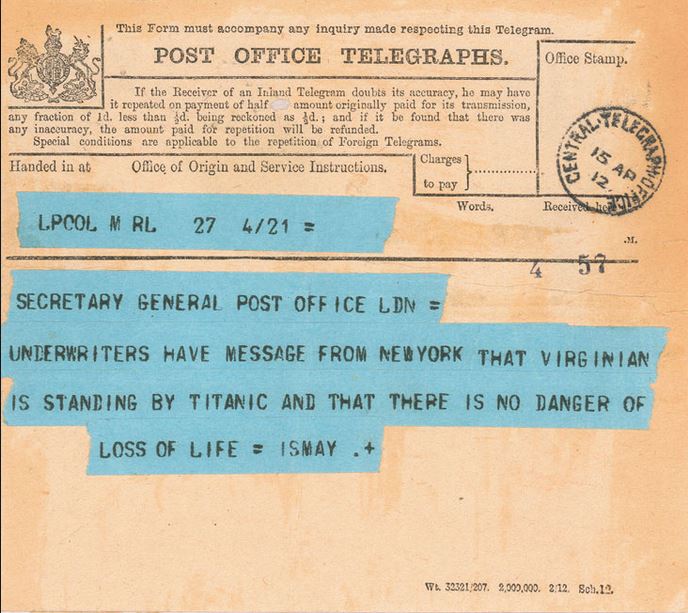 A good news telegram – all on board the Titanic are safe. There is no danger.

The news that flashed across the wires last month sounded definitive. The oldest form of long-distance instantaneous communications had come to an end, roughly 170 years after its birth. A form of works on paper that carried the most important news of its day at the fastest speed existed no more. The telegram was dead. Telegrams carrying such terrible news as the beginning of war, the sinking of the Titanic, or the assassination of Lincoln are highly sought after works on paper by collectors. The next great war will not be so announced, reason enough not to have one.

The telegram was the offspring of Samuel F.B. Morse. An obscure, virulently nativist political crank, Morse's scientific mind was as creative as his social one was frozen. He came up with the idea of sending electronic signals through a wire, concluding this could be done over great distances. He did not figure out that voice could be converted into such impulses. That would be left for Alexander Graham Bell to discern four decades later. Morse's idea was to send a series of long and short tones that would constitute a code. He worked on his idea in the late 1830s, and by the early 40s he had strung up some wires. By the end of that decade, small companies were sending messages through the wires, using Morse's short and long tones (dots and dashes) that signified letters. It was aptly known as “Morse Code.” On one end, an operator tapped on a device that punched out the tones; at the other end of the wire, another operator would hear the tones and quickly translate them by hand to letters and words on paper.


Lest anyone think this system is exceedingly primitive, it's worth noting that the Battle of New Orleans, in which over 400 people died and another 1,700 were wounded, took place several weeks after the War of 1812 ended. The problem was that it took longer than that to relay the news of war's end to troops in the field. Had it been the war of 1852 instead, none of these casualties would have occurred, thanks to Mr. Morse's invention.


As happens in all new businesses, there are many start-ups, but most get consumed by a few large companies. There were two companies in the process of consuming their smaller competitors in America in the early 1850s, and in 1855, the two combined. It became known as Western Union. Other countries undoubtedly had their large telegraph companies, but in America it was Western Union, though others competed. Western Union became one of the most important companies in America. It was one of 13 companies that were part of the original Dow Jones Industrial Average (only Western Union and Union Pacific survive today).


Of course, technology moves on and the telegraph as a means of fast communication would be surpassed by an even faster method of communication – the telephone. However, it was a very slow death. The telephone was instantaneous, but it provided no written record, and you had to be home to receive it. Additionally, it would still be many years before the long-distance phone call was as cheap as the telegram. So through all of the 20th century, Western Union had their couriers out delivering messages to your door by hand, after transmitting them electronically to your town where they could be printed out and delivered on paper.


While once the primary means of quick communications, by the second half of the 20th century, telegrams were used mostly for important messages, business deals or major family matters. Getting a telegram was often like getting a phone call at 2:00 a.m. Yes, it might be someone calling to tell you that you won the lottery, but more likely it was some dreaded news, such as a death in the family. The arrival of a telegram evinced feelings of both hope and fear.


Western Union sensed the impending doom of their business long ago and wisely branched out into other areas. Nevertheless, they barely survived. In 2006, 155 years after it began, Western Union announced that it would carry telegrams no more. The decision was hardly a surprise. In 1929, Western Union transmitted 20 million telegrams. In 2005, the number was down to 20 thousand. It was time. A spin-off company, iTelegram, continues the service, sort of. You can go online and fill in a message to be delivered as a telegram, but outside of a few large cities, they will be dropped in the local post office to be delivered by mail, not courier. Western Union had long become involved in other areas, mainly financial services, and is best known today as a place to wire money rather than messages to someone far away.


The news that hit the wires last month came from India. Not as technologically developed as the West, telegrams continued to be more widely used in this nation, particularly between family members living in the countryside and the city. So they soldiered on until last month when the state operated telegraph company, in operation since 1850 when India was a British colony, called it quits. That was 163 years worth, a longer run than even Western Union.


While this was a notable event in the decline of the telegram, it really isn't its death. Then again, it wasn't really alive anymore either. This is part of the final stages of the end to a moribund industry that technically still survives in India as it does through iTelegram in the U.S., but is not even a shell of the business it once was. If you collect telegrams, or collect other events immortalized in a telegram, hold on to them. Printed books are being produced in smaller numbers today, but they are still being produced, and undoubtedly will for a very long time. Telegrams, however, now officially join the same category with real estate – they aren't making them anymore.


Editorial Note:  Good news! The folks at iTelegram have informed us that they do provide national courier service in the U.S. for telegrams, good news for those who still appreciate the urgency of the medium. Here is what they tell us:

I wanted to clear up a mistake in the article. iTelegram does deliver all first-class (priority) telegrams by courier in the USA, not just to a few cities. This information is published on our web site: www.itelegram.com/telegram/send.asp?recCountry=US.