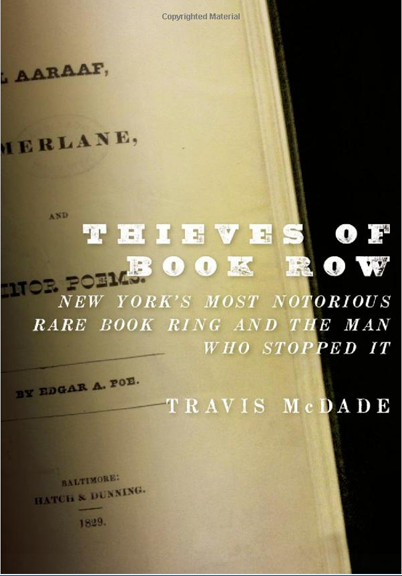 Books have for more than a hundred years been common and their principle purpose – to carry information to the interested.   A few among these many volumes have become collectible, the best of them talisman of taste, beauty or priority and sometimes all three.  Such books are sometimes first impressions, others wonderful presentations and annotated copies, others still rare and very rare, the best of them highly collectible.

While books are common the eye to appreciate their finer points and physical attributes is rare.  Everyone has an opinion but only a few have perspective.    For those who ‘know’ the opportunities are many.  For those that don’t the opportunities to make mistakes are limitless.


Such opportunities for the knowledgeable divide between the legal and illegal.  The legal possibilities include browsing books offered for sale, negotiating and buying what you believe to be attractively priced.  More difficult are the situations where the potential buyer is asked to make an offer.  Many dealers prefer that the seller state their price.  At a minimum they want to understand seller expectations and if they can, their perspective on value and price.


Sellers, understandably, will be optimistic and buyers, understandably cautious.  Books sell but not so easily as they once did.  Sellers will refer to their having seen similar things on Abe for thousands and buyers will point out “yes but many other copies were offered for less and, in any event, it is sales, not listings, that matter.”


Because valuing books has always been both an art and a science books have been more subject to theft than objects whose value is implicit.  Gold bars get locked up, iron bars do not and if those working with such material do not understand the difference they may insufficiently protect the valuable objects.  In such circumstances the unethical have historically preyed upon the innocent.  For libraries the primary goal is always to make material accessible while trying to ensure that access is not abused.  The outcome has been increasing security - protecting the material, often the important and sometimes the not, the rare and not and doing so at the expense of the library’s primary mission, to provide access.

It is an old problem, probably as old as books themselves and one made more difficult by rising values that incentivize theft.  Into the history of book and document theft we have two books that illuminate the problem, Jeremy Norman’s account of 19th theft [that I wrote about this past month] and now Travis McDade’s account of library theft in the early decades of the 20th century.


Jeremy Norman’s Scientist, Scholar & Scoundrel: A Bibliographical Investigation of the Life and Exploits of Count Guglielmo Libri is the account of the notorious pillager of libraries who enjoyed exceptional access to European libraries in the 19th century and “collected” in the era before consistent documentation existed. He could simply walk off with treasures, often leaving no trace, other times substituting inferior copies for gems.  Collections, in his era [1820-1865] were often defenseless, the Count could not resist and there was no comprehensive system to easily identify a collection’s holdings.  A universal identification system would begin to be implemented in the 1870’s, to make retrieval easier and identify the missing and misplaced.  By that time the Count was retired.

We then cross the Atlantic to New York where in the late 19th century the Astor and Lenox collections were gifted to the New York Public Library and serious efforts made to both provide and control access to what was becoming a world-class collection of old and rare books.  Access versus security would become a long-term issue and the New York Public Library be among the first to try to systematically address the issue.


By the first decades of the 20th century two other factors were altering the stakes.  Institutions were beginning to collect broadly and prices were rising.  The decision to steal is a risk-reward calculation and rising prices made old and collectible books more appealing targets.  Unfortunately prices rose more quickly than institutions responded and it made theft in the early decades of the 20th century a high-reward low-risk undertaking that attracted an attentive audience of thieves.


For insight about this period, we have Thieves of Book Row by Travis McDade.  In it he details the history of book theft in New York and New England beginning with some history of the 1890s and continuing into the mid-1930s.  It turns out that libraries, torn between protection and access, both believed in the honesty of patrons and often did not understand that the street value of their material that was sometimes surging in the low-tax, high reward environment that propelled the 10% down stock market.   America was betting on its future and rare books in the 1910-1929 period a good bet too.  Later, with the onset of the depression and the end of the upward spiral in prices there would also soon be fewer jobs and more desperate men.  Into this downturn rare books also lost value but many were still valuable enough to steal and the crime both un and under-reported and judges, when the apprehended were taken to court, sympathetic to the man who wanted to read too much.


In the downturn, with money tight, libraries did not have money to increase security even as the theft problem was becoming apparent.  So, too often books were there for the taking.  Mr. McDade’s account, a very well written fact filled, intense and highly entertaining account, brings this period to life.


Libraries ultimately, learning of sin in the world, became cautious and rare book prices, after a 15-year side trip to hell [1930-1944], recovered and have since gone on to set records year after year, collectible material now often 50 to 100 times more valuable than it was at the beginning of the 20th century.  And this has left libraries with a predicament.  The material, once freely available, is now subject to high security, limits on aisle grazing, and many rules to limit damage to increasingly fragile material.   But the greater goal for libraries has been broad access and this is impaired and it’s a shame for the number of people who steal is inevitably small and the number of people affected by limited access large.


The issue of access will be resolved with online access to full texts.  This is already occurring and will increase and improve so scholars and the interested will find what they seek.  Whether this will help book collecting is another matter and one can only hope.


It turns out that thieves not only stole books, they may have also stolen some of the future for book collectors who without physical contact with the material and the wisdom and perspective of rare book librarians to bring the field to life, may never sense the power of this category of collecting.

One is also then left to wonder when the complete texts of collectible books will be accessible on line and then of course the inevitable ‘what’s next.’  Will libraries maintain their collections or dispose of them?  If they are to sell or thin them there will need to an audience open to buying.   With shops closing and access to rare books in libraries restricted building a new audience will be a challenge.


Here are Amazon links to both books mentioned in this article.  Both are important.