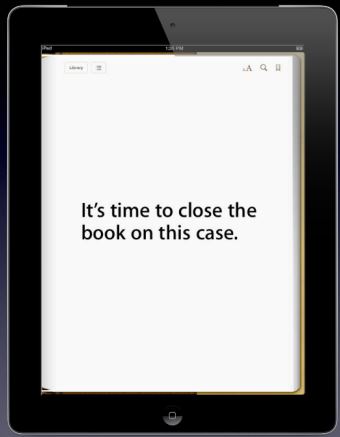 The closing slide from Apple's unsuccessful presentation in court.

The last man standing has fallen in the government's lawsuit over price fixing of electronic books. Unlike its partners in “crime,” Apple did not go down without a fight. Indeed, Apple says it will try to rise off the mat to go another round. For the moment anyway, the bell has rung and the U.S. Department of Justice has swept through each round and the judge has awarded it a lopsided decision.

The government's suit alleged that Apple conspired with five book publishers to thwart competition, resulting in higher prices of e-books for the book-buying public. Here are the basics of what happened. A few years ago, when e-books were new, Amazon began to offer them for sale. Amazon likes to dominate a market, and is willing to forgo current profits to become the market leader. So, Amazon bought the publishers' e-books, but sold them at cutthroat prices. Their prices left little room for profit. Some were sold at a loss. It didn't matter to Amazon. They were not out to make a dollar today. They were out to become the runaway leader in selling electronic books, the one place customers would turn when they wanted one. Profits could come later.


You might think the publishers would be laughing all the way to the bank. Cheap prices encourage more sales, but those discounts came at Amazon's expense. The publishers were getting their full price. Nevertheless, if you thought that, you were wrong. The publishers were not pleased at all. They wanted e-books to reach new customers, not the old print book buyers. The publishers make more money on a printed book than an e-book. If Amazon's super low prices ended up stealing away print book buyers, publishers feared their margins per book would fall. They wanted e-books to be an alternative method for people to buy books, not a cheaper one. They wanted Amazon to raise prices. Amazon, on the other hand, wanted to keep their prices low to discourage competition on the retail side.


When one of the publishers tried to force Amazon to sell at higher prices. Amazon threatened to stop buying their books entirely. The publisher relented. Amazon had become too powerful to take on alone.


Into this milieu stepped Apple, the giant computer, smart phone, i-this and i-that maker. Apple wanted to offer e-books for sale, but unlike Amazon, Apple does not want to wait to make profits. It wants to make them now. There was no way Apple could be competitive with Amazon on price and make money. The firm relayed its distress to the publishers. A different pricing model, however, would cure this problem. If the publishers switched to so-called agency pricing, where the publisher dictates the retail price rather than the retailer, Apple would be able to compete on price. If Apple could compete on price, it meant prices would go up, and customers would be less likely to buy cheaper e-books instead of higher priced printed books. This idea looked good to both the publishers and Apple.


Exactly what happened next was the subject of dispute. Apple held negotiations with the various publishers. The publishers switched to agency pricing. When the first publisher switched, Amazon said it would stop buying their books. When they all did, Amazon could no longer afford to pull the plug. They would have lost access to too many titles, meaning e-book buyers would turn to other retailers to buy their books. That was exactly what Amazon wanted to avoid. It had no choice but to give in and agree to sell e-books at the higher “agency” prices.


Now, there is nothing illegal about publishers employing an agency model, even if it does eliminate price competition among retailers. That is not considered price fixing. However, when several publishers get together and all agree to adopt agency pricing, that is considered illegal collusion and price fixing. That is what the Department of Justice alleged. And the instigator, or “ringmaster” to use their term, they said was none other than Apple.


The Department of Justice claimed that Apple was managing a conspiracy whereby each of the publishers would switch to agency pricing. And so they all did, at the same time, change to agency pricing. Apple was able to sell their books, and Amazon was forced to raise the price of books they sold, often from $9.99 to $12.99 or $14.99.


Apple responded that all they did was negotiate with individual publishers for terms that they felt would allow them to sell their books. They were in no way encouraging a concerted action on the publishers' part, said Apple. Judge Denise Cote looked at the evidence, including comments attributed to late Apple CEO Steve Jobs in his biography, and concluded otherwise.


In her decision, Judge Cote wrote that the publishers were already seeking a way to collectively raise prices, as they knew Amazon could effectively retaliate against the first who tried. When approached by Apple, all parties immediately recognized a common interest in having higher prices. “Apple seized the moment and brilliantly played its hand,” she wrote. “With a full appreciation of each other’s interests, Apple and the Publisher Defendants agreed to work together to eliminate retail price competition in the e-book market and raise the price of e-books above $9.99.” Guilty as charged.


The publishers long ago threw in the towel and agreed to settle with the Department of Justice. They were assessed hefty fines, but the damage could have been much worse if they fought and lost. One reluctantly settling publisher noted the potential damages in a loss would put them out of business, too great a risk to continue the fight. By continuing to fight, Apple risks a large financial judgment, but with $150 billion in the bank, even the worst outcome will not materially harm their business. As a result, Apple immediately announced that it would fight on. They will take the case to the Court of Appeals, and if this is unsuccessful, they will have one more option – take it all the way to the Supreme Court. Most legal commentators do not believe the odds are in Apple's favor, but some believe they have a shot. The problem for Apple is cases are generally overturned because a higher court believes the lower court did not correctly apply the law. In this case, the dispute is not so much over the law as it is over the facts – did or did not Apple act as a “ringmaster” who led the five publishers to all take some action? Hoping a higher court will reach a different factual conclusion from the same evidence is a tougher challenge, but Apple is a company with the resources to take on even the toughest challenge.


Unrelated Addendum for those who read this far: Admittedly, this has nothing to do with books, but if you think Apple has legal problems with e-books, that is nothing compared to a lawsuit initiated by a buyer of an Apple computer from Tennessee. This customer has demanded that Apple sell its computers in “safe mode,” preset to block pornographic sites, along with paying him something in excess of $75,000. After a thorough description of the horrors pornography has inflicted on society, he tells his own sad tale. One day when he was trying to find Facebook, he accidentally hit two wrong keys. Here is what he typed, leaving the erroneous keys blank: f_c_book. We will leave it to your imagination what letters he accidentally typed besides the “a” and “e” of “face” in those two blanks. I can say that I checked out my keyboard, and discovered “a” is nowhere near “u,” and “e” is nowhere near “k.”


After that, it was all downhill. The complaint states, “The Plaintiff began to prefer the cyber beauties over his wife, which caused his marriage to fail. His wife abducted his son and disappeared, which was a subsequent consequence of Apple's decision to sell its computers not in 'safe mode.'” The complaint continues that the plaintiff, a member of the always chaste music profession, had previously “never seen pornographic images.”


The Tennessean goes on to explain, “When the Plaintiff bought his Apple Mac Book, no one at apple's store warned him that looking at pornographic images and videos could cause addictions to include arousal addiction or that the device could be the gateway to accessing content that could cause a rewiring of his brain, which lead to the demise of his family, unemployment, and unwanted changes in life style.” On this point I am in his corner. I have been to Apple stores and the salesmen absolutely do not make this warning. I must also agree with his claim that Apple knows full well “that the internet is loaded with porn.”


He later claims that the pictures “caused a release of dopamines and endorphins” which addicted him. On this one I will pass – not all that up on the science stuff. Neither would I pose as a legal expert. Nevertheless, I think this will be a tough case for the plaintiff to win. Sometimes you just have to take responsibility for your own behavior. You lose some but you win some, and on this case, I forecast an Apple victory in court.