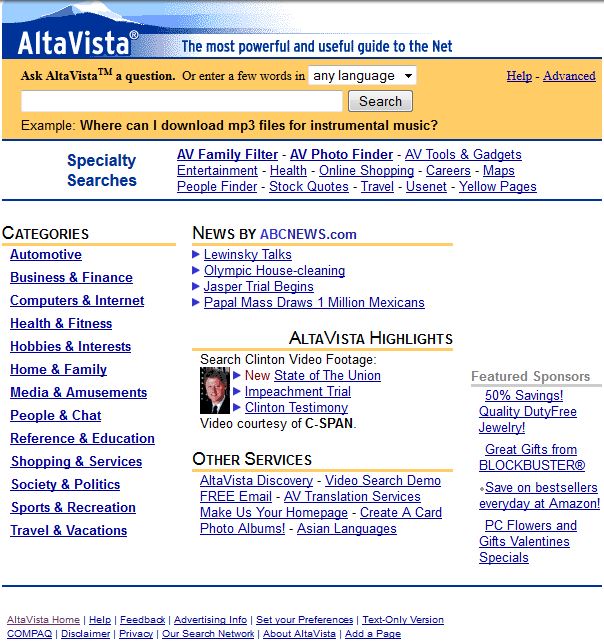 Alta Vista during its heyday.

This is not a story about books. There... now that I have lost most of my readers, I can write about whatever I want. This is about how access to information changes. Once slowly, changes now flash by as quickly as you can unwind an 8-track tape. And yes, there are comparisons to bookselling.

The 1990s began with small bookshops trying to fight off the large chains. It ended with the chains trying to fend off internet sellers. It all happens so fast. A few become large, the rest either disappear or find a niche where they can outperform the giants. There really isn't much other space. Evolve or die applies to bookselling as surely as it does to dinosaurs. And to the internet. We are entering another time of change for bookselling, but that is an issue for another day. For now, we will take a look back at an early giant of the internet. RIP, AltaVista.


My own introduction to the internet came in the second half of the 1990s. There were lots of alternatives if you wanted to search that vast universe of information out there you never could access before. An internet search was filled with excitement then. Basically, there were two types of search sites. There were the directories. Frequently compiled by hand, they placed links to sites under topic headings. Yahoo had the most notable one, but there was LookSmart, Overture and thousands of smaller ones, the bigger ones trying to extract a fee from the sites they listed, the others hoping to get by on advertising. Does anyone ever use a directory any more?


The second way to search the internet was through a search engine. There were lots, each with its own formula. America Online (AOL), which was the largest online service provider in the era of dial-up, and their largest competitor, CompuServe, also provided search. So did early dial-up rival Prodigy. Non-service provider search engines were all over. Yahoo had a search engine as well as a directory. And there was Excite, Infoseek, Lycos, MSN, Snap, Ask Jeeves, HotBot, Inktomi, Webcrawler, and many others I have forgotten. But, the best of the lot was AltaVista. Most of the others were web portals, as Yahoo and AOL still are today. They provided news and everything else, search being just one feature. Not AltaVista. They offered search, that's all, but were the best at it. Sound familiar? Whatever their formula, and each search engine had its algorithm, AltaVista provided the best matches. I don't recall anyone ever turning AltaVista into a verb. I never said I was “Altavista-ing” anything, but I AltaVistaed a lot of topics in the late 1990s.


AltaVista was born in 1996. It was the child of Digital Equipment Corporation, another great tech name from the past. It moved on to Compaq in 1998 when DEQ was sold, then to CMGI. Remember CMGI? Gillette Stadium, home of the New England Patriots, was originally named CMGI Field. That's how big CMGI was. The Patriots never played a game on CMGI field. By the time construction was completed, the internet bubble burst and CMGI could no longer afford the naming rights. Those rights moved on to safety razor manufacturer Gillette. What an ironic backward twist of technology that was. In 2003, AltaVista moved on to Overture, which itself was taken over by Yahoo later that year. It has remained there ever since. At least until July 8, 2013. That is when Yahoo shut it down. Rest in peace, AltaVista.


At the turn of the millennium, one of my jobs involved finding websites, directories and search engines to post links to my employer's website. Search engines might not know your website existed if you didn't tell them. One day in performing my AltaVista searches for sites I didn't know, I came across a new search engine with a funny name. It was called “Google.” Obviously, you can guess the rest of this story. AltaVista had turned itself into a web portal like Yahoo and AOL, Lycos and Excite, its owners believing there was a greater audience for these multi-purpose sites. Google was like the original AltaVista. Even today, while Google offers much more, its home page remains a simple search page, just as it was when I first stumbled across it. AltaVista later returned to simplicity, but by then it was too late.


Why did Google become such a huge success, eventually crowding everyone else either out of the business or to minor status? Today, Bing, successor to Live, successor to MSN, still competes. Parent Microsoft can afford to compete. It is a distant second. If someone else still competes, it escapes me. AOL uses Google searches; Yahoo uses Bing's searches. Truth be told, in recent years AltaVista just used Yahoo/Bing searches. Google swamped everyone else. How? They used a formula that determined which sites were most popular, rather than those which just matched your search terms most often. I didn't know about algorithms at the time. What I did notice was that I got better matches, better even than AltaVista. I switched. I don't recall anyone else I knew knowing about Google then. I had just stumbled upon it and found it significantly better. Obviously, in the years ahead, just about everyone else had the same experience. It was noticeably better, enough so to switch. Microsoft and Bing offer a capable search engine, but they have never been able to match that first Google experience, no matter how much they tell us their searches are better. Maybe they are better as claimed, but they just don't seem that different. You need a reason to change.


What does this have to do with bookselling? Not much directly. It's just a reminder of how quickly things can change. The heyday of AltaVista in many ways matched the heyday of internet bookselling. The internet opened customers all over the world to every small town bookseller. Dozens of book listing sites appeared. The Advanced Book Exchange (now AbeBooks), Alibris, successor to the pioneering Interloc, and Amazon were the largest and still are. Most of the others either disappeared or soldier on in irrelevancy, though European ZVAB, later arrival Biblio, and a few local sites are still significant. However, none can perform quite as they did when internet bookselling was new. Buyers were accessing this incredible new medium for the first time and filling their shelves with books they never thought they would find. Meanwhile, the price of listing was incredibly cheap, often just a small percentage of the sales price if, and only if, the book sold. Today, listing is more expensive, the number of books listed competing for attention far greater, and sales harder to come by. It's no longer easy. The bookseller needs to adapt. Adapt or perish. Adapt or become AltaVista.