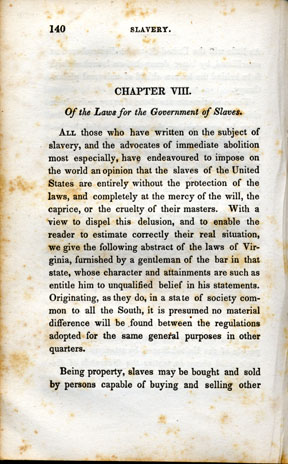 SLAVERY IN THE UNITED STATES
By J. K. Paulding
Published in New York in 1836
CHAPTER VIII.
Of the Laws for the Government of Slaves.
7,676 words

ALL those who have written on the subject of slavery, and the advocates of immediate abolition most especially, have endeavoured to impose on the world an opinion that the slaves of the United States are entirely without the protection of the laws, and completely at the mercy of the will, the caprice, or the cruelty of their masters. With a view to dispel this delusion, and to enable the reader to estimate correctly their real situation, we give the following abstract of the laws of Virginia, furnished by a gentleman of the bar in that state, whose character and attainments are such as entitle him to unqualified belief in his statements. Originating, as they do, in a state of society common to all the South, it is presumed no material difference will be found between the regulations adopted for the same general purposes in other quarters.

Being property, slaves may be bought and sold by persons capable of buying and selling other property. In relation, however, to free negroes and mulattoes, there is this qualification: that no free negro or mulatto shall be capable of purchasing or otherwise acquiring permanent ownership (except by descent) in any slave other than his or her husband, wife, or children.

They are held to be personal estate,* (Rev. Code, vol. i. p. 431, line 47.) and as such may be levied upon and sold for the debts of the owner. But these qualifications exist. No collector of taxes, levies, fines, forfeitures, amercements, or poor-rates, or officers' fees, is allowed to distrain upon slaves for the purpose of satisfying any such dues, if other sufficient distress can be had.** (Ibid. p. 282, line 25) So in relation to executions. No officer is allowed to take slaves in execution for a debt of small amount, when other sufficient goods are shown to him.*** (Ibid. p. 532, line 21.) When taken, however, under execution and attachment, the officer is required to support them until sold or discharged, for which an allowance is made him not exceeding twenty cents per day for each slave. **** (Ibid. p. 533, line 24; p. 480, line 18.)

Upon the death of the owner, his personal representative is inhibited from selling the slaves, unless the other part of the personal estate (regard being had to the privilege of specific legacies) shall be insufficient to pay the debts and expenses; and then only so many of the slaves are sold as will be sufficient to satisfy the debts and expenses. The residue [is] reserved in kind for the legatees or distributees.* (Rev. Code, vol. i. p. 387, line 49.) Sometimes there are so few slaves, and so many distributees, that an equal division thereof cannot be made in kind. In such case, a court of chancery for the purpose of division may direct a sale of the slaves and a distribution of the proceeds according to the rights of the parties. ** (Ibid. p. 432, t) 50.)

The kind of labour to be performed by the slave for his master and its extent, are regulated by the master. The master, however, is liable to a penalty if he employ his slaves on a Sabbath day, except it be in the ordinary household offices of daily occurrence, or other work of necessity or charity.*** (Ibid. p. 556, line 5.) So, too, in relation to food and clothing. The kind and quality of each which the master is to furnish, depends generally upon himself. Where the slave is one capable of labour, and the master is deriving benefit from his work, the interest of the master and public opinion combined, generally furnish an adequate guarantee that what is reasonably sufficient will be provided. Humanity and sound policy, however, have dictated a provision for that class who are of no service to their masters. It is enacted that every master or owner of a slave of unsound mind, or aged, or infirm, who shall permit such slave to go at large without adequate provision for his or her support, so that such slave must be dependant on charity, trespass, or theft for support, shall pay a fine for every such offence; and it is, moreover, the duty of the overseers of the poor of any county or corporation where such slave shall be found, to provide for the maintenance of every such slave; to charge the master or owner with a sum, quarterly or annually, sufficient for that purpose, and to recover the same by motion.* (Sup. Rev. Code, p. 236, § 3. )

Since 1788, the life of the slave has been protected by the laws equally with that of the freeman; ** (Hen. Stat. vol. xii. p. 681.) and the statutes against maiming extend as well to the protection of the bond as the free. In 1811, it was decided by the superior criminal court, that the statute against stabbing would sustain an indictment for stabbing a slave as well as a freeman. *** (Com. vs. Chappie, 1 Va. Cases, p. 184.) A. similar question was before the court in 1827, upon an indictment for shooting a slave and decided the same way. **** (Com. vs. Carver, 5 Rand. 660.) The court held that the act was intended to protect slaves as well as free persons, and the same punishment should be inflicted for unlawfully shooting or stabbing a person in one class as in the other.

Whether the slave is protected against minor injuries from the hand of the master, has been a .question in Virginia of much doubt and difficulty. On one occasion, a master was indicted in a circuit court, and by the judgment of that court punished by fine and imprisonment for the immoderate, cruel, and excessive beating of his own slave.* (5 Rand. p. 687.) A subsequent case was carried before the supreme criminal court in 1827, and that court was of opinion that the common law could not operate upon slavery, which was a condition wholly new to it, and that no act of the legislature having been made for the punishment of the offence, the indictment could not be sustained. In the conclusion of its opinion, the court say, "It is greatly to be deplored that an offence so odious and revolting as this, should exist to the reproach of humanity. Whether it may be wiser to correct it by legislative enactments, or leave it to the tribunal of public opinion, which will not fail to award to the offender its deep and solemn reprobation, is a question of great delicacy and doubt. This court has little hesitation in saying that the power of correction does not belong to it."* (Com. vs. Turner, 5 Rand. 686. )

If any negro or mulatto, bond or free, furnish a pass or permit to any slave, without the consent of the master, employer, or overseer of such slave, he may be punished by stripes, not exceeding thirty-nine, at the discretion of a magistrate. The terms of the statute are rather stronger where the act done is with intent to aid the slave to abscond from his owner or possessor. **** (Ibid. p. 423, line 6; Sup. p. 80, line 6.) To guard against the consequences of allowing slaves to write passes, it has within a few years past been enacted, that if any white person, for pay or compensation, shall assemble with any slaves for the purpose of teaching, and shall teach any slave to read or write, such person, or any white person contracting with such teacher so to act, shall be liable to a fine.* (Sup. Rev. Code, p. 245, line 6.)