The Modern Theophraste, Or The Rehabilitation of Pierre-Jacques Brillon 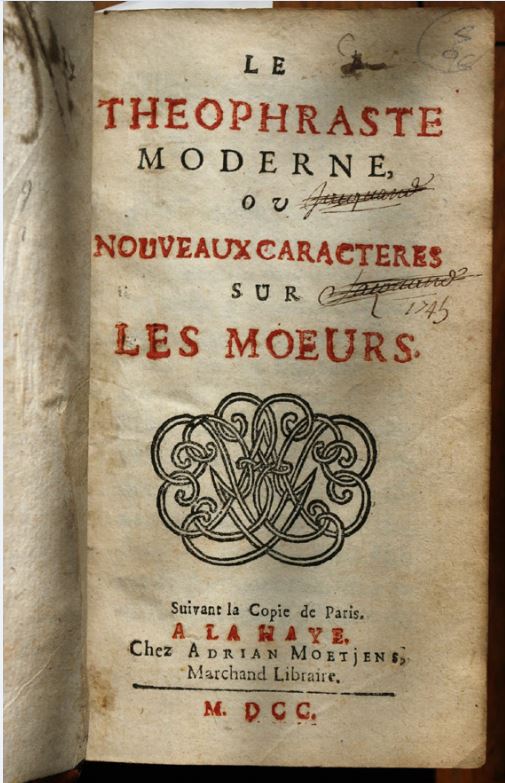 The grand siècle was the paramount of French wit. Under the yoke of the Sun King, the Nobility was reduced to a bunch of courtisans. To be noticed by the King or some important people around him was the surest way to get a promotion, and to show some wit, the surest way to be noticed. But everyone was not witty, and ridicule became the most feared plague of the time. “Ridicule can not be defined,” wrote our author Pierre-Jacques Brillon; “it is useless even to call it a bad quality linked to the sayings or the doings of some. No matter what these people do, they are disliked, hated, despised; with no reason but the ridicule about them. The harder these people try to be kind and nice, the more ridicule they appear – and there is no escaping it.” But even the most witty courtisans had the cruel consciousness of their own vacuity, and ridicule sometimes bordered on drama, as described in the following poem of S. Martin:


“ To serve the Sovereign, or to give oneself a master,

To totally depend on the will of another,

To remain in some places we would like to ignore,

To kiss every one and to find a friend in no man,

Such is the abridged life of a courtisan.”


The bitter-sweet literature of the time is a faithful mirror of this “préciosité”. Some writers portrayed their contemporaries, ridiculing ridiculousness. La Bruyère was the most successful one. His Caractères’ became a best seller and inspired many authors such as Pierre-Jacques Brillon, a young writer who personally knew his model. Brillon was encouraged by La Bruyère to put out his own collection of portraits in 1696, Portraits Sérieux, galants et critiques (or Serious, Gallant or Critical Portraits). “To deal with the same topics as his model is not enough to deserve the same praises,” wrote a contemporary critic. “This particular writer is to his model what a painter of shop signs would be to Rubens.” Nevertheless, Brillon’s book was well received at the time, and he soon put out a new one, entitled Le Théophraste moderne (or Modern Theophraste, 1699). At the end of the day, our author remained in the shadow of La Bruyère and the copies of his books are not that sought-after nowadays. While reading him lately, I realized how unjust it was, then decided to rehabilitate the work of this author - so help me God.


Many great authors of the time such as Montreuil or D’Aceilly were considered as inconsistent by the critics of the Enlightenment, because they mostly wrote about casual topics such as their lives at Court, or their romances. In the case of Brillon, things were even worse. He was an imitator. FX de Feller wrote, in his Dictionnary (Liège, 1790): “These bad imitations of a good book enjoyed a short-lived popularity because readers had then developed a taste for books written in the vein of La Bruyère’s”. Should I boldly add that this success was partly due to his talent?


Born in Paris in 1671, Brillon was a man of law from the start – a general prosecutor, and a member of the Grand Conseil of Paris, he had a brilliant career. As a young man, he was attracted to literature. His reading La Bruyère was probably a revelation, so was his meeting him. “I follow Labruyère’s footsteps,” reads his preface, “who loved me enough to encourage me in this way; he was not idolizing his work enough to consider that nothing could be added to it. (...) I was occasionally happy enough to be approved by a man of such good taste – I was flattered, I even thought that it entitled me to write a book.” He was only 25 when he published Portraits Sérieux, galants et critiques (Paris, Michel Brunet – 1696). It features a brilliant author’s note. “This is the first book I offer the readers, and the last if so they wish. I am not the type of stubborn writers who keep on working without the readers’ consent. Else I shall choose to do very early what many have only done too late, and retire from writing.” He eventually did. But not before putting out a second book. Aged 25, he was writing twice as well as most fifty-year-old writers.