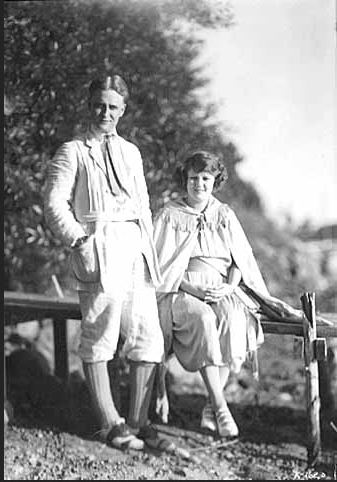 The release of the latest film edition of The Great Gatsby was the second most important news pertaining to author F. Scott Fitzgerald to come out over the past few weeks. The more important news came out of the University of South Carolina, where a digital copy of Fitzgerald's personal ledger has been posted online. Those with an interest in the novel-like life of Fitzgerald more than the fictional ones of his characters will be fascinated by this document.

Fitzgerald kept a long-running journal of his earnings, his wife's earnings, and various personal events. It started in 1919 or 1920, and continued until 1938. At the beginning, he was just starting out, still an unknown, the woman he loved by his side, a bright future in front of him. By the end, his world was tumbling apart, his marriage in shambles, his health deteriorating, and his time remaining on earth short. Fitzgerald, and his “flapper” icon wife Zelda, burned brightly, but their candle did not burn for long.


Money was always an issue for Fitzgerald. His earnings were substantial for their time, but not those of a wealthy person. Incomes in the twenty thousands of dollars in the 1920s would probably translate to the two hundred thousands today, maybe even a little more. For the first year of this ledger, 1919, when Fitzgerald was just starting out, selling some short stories and plays, he made only $879. By the next year that jumped to $18,175, including $6,200 from This Side of Paradise, his first novel, and $7,425 from movies. It was in that year that Zelda, who had previously broken their engagement but was now more confident in Scott's ability to support them, married him, for better or worse.


Surprisingly, Fitzgerald's follow up novels did not do all that well. His short stories were more lucrative. His best known novel, The Great Gatsby, came out in 1925, but did not add substantially to his income. However, movie rights did. In 1925, he took in just under $2,000 for the book, only $500 in 1926. However, movie rights to Gatsby were worth $13,500 in 1926, a little more than half of his income for the year. By 1927, outside of an advance for a new novel, Scott earned less than $200 for all of his books combined, but between stories, movies, and rights, he still took in almost $30,000.


From this point, his income continued to grow every year until it peaked in 1931. That year he made $37,600, including $31,500 from stories, but a mere $100 from books. Considering this was 1931, heart of the Depression, the success is amazing. Yet even with his growing income, the Fitzgeralds would face financial challenges. They often lived beyond their means, and as Zelda's mental health broke down, she required growing care. Financial success did not translate to personal satisfaction.


After 1931, with troubles mounting, we see Scott's income dwindling. He earns well under half as much in 1932 as he did in 1931. He is forced to borrow money from his agent to stay afloat. He manages to get income back to $20,000 in 1934, but by 1936, it is down to $10,000. At this point the record of income stops, but we know Scott moved to Hollywood in 1937 to write screenplays, and his earnings rallied. However, he detested the Hollywood work, finding it unseemly for a serious writer. He sunk deeper into his alcoholism. Meanwhile, Zelda's mental issues escalated, she spent much of her time in institutions, and the two effectively became separated. Scott moved in with gossip columnist Sheilah Graham. However, Scott's health rapidly deteriorated. He suffered a pair of heart attacks, but continued to push on, until a more serious one late in 1940 ended his life. He was totally burned out. Zelda spent her days after the mid-1930s in and out of mental institutions, mostly estranged from Scott. By 1943, she was back in an institution where she remained until she died in a fire is 1948.


The financial records are fascinating because finances played such an important role in Fitzgerald's life. However, many will find his personal time line to be the most interesting part of his ledger. This is not a diary, written as events unfolded, but a look back on much of his life. We can be confident it is a look back because it starts with September 24, 1896, where Fitzgerald writes, “at 3-30 P.M. a son Francis Scott Key Fitzgerald to Edward and Mary Fitzgerald.” He was not small, weighing in at 10 lbs. 6 oz. We learn other details clearly not from his own memory, such as he had colic in November, laughed for the first time the following February, crawled and had his first tooth in May, and said his first word, “up,” in July. We even see some humor here as Scott writes that in December 1897, he had “Bronchitis. A specialist was summoned but as his advice was not followed the child pulled through.”


The time line continues with rapid fire snippets of his life. By his third birthday he already weighs 35 pounds. His mother presents him with a new sister, but she only lives an hour. He celebrates the new century by swallowing a penny and catching the measles - “He got rid of both of them.” He goes off for a first day at school, but cried so much his parents quickly had to take him home. We also find that Fitzgerald suffered some sort of “freudian” shame about the appearance of his feet, so much so that he wouldn't go swimming though he very much wanted. If that isn't troubling enough, he had a birthday party at age 7 “to which no one came.” He jokes they moved from Syracuse to Buffalo “possibly in consequence.” No wonder his life became such a mess.