Can Secondhand Dealer Legislation Ensnare Even the Collector? 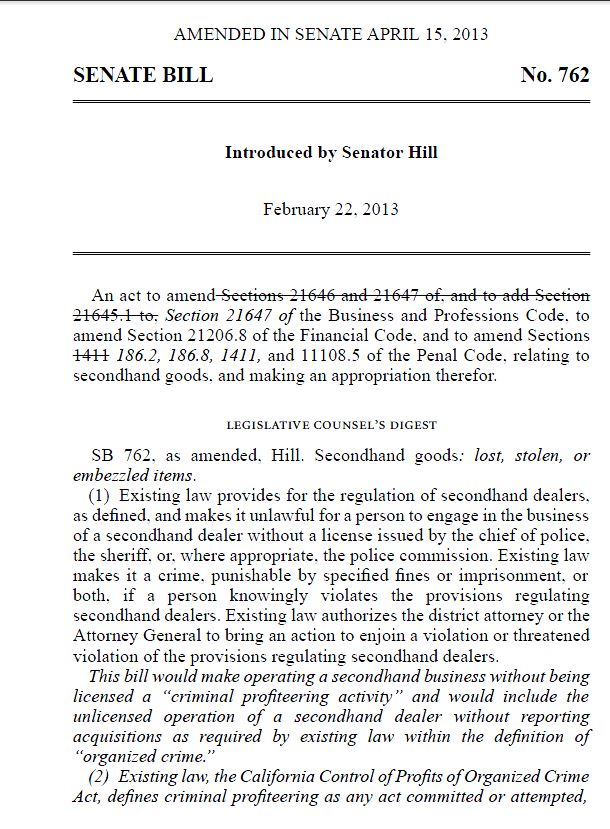 The devil is in the details. California, a leader in legislating things, has long tried to regulate secondhand trade. It is not that they are looking to complicate the world for small sellers who trade in used goods. The problem relates to stolen merchandise. The way one sells such merchandise, or using the proper term, “fence” such merchandise, is generally through the secondhand market, a place where people are frequently willing to buy goods for an unusually low price, no questions asked. One category of goods frequently associated with the trade in stolen merchandise is books. Legislators are aware that libraries provide a ready product source for those who like to sell without first buying their books.

Earlier legislation was mostly focused on pawnbrokers. In another era, thieves generally would bring what they stole to a pawnshop, the most notable seller of secondhand merchandise. However, it is no longer so easy. Flea markets, thrifts shops, eBay and the like have become viable markets for fencing goods. Undoubtedly, law enforcement (and consumers) often see things for sale in such venues and wonder how can they be so cheap. The law probably knows very well. The problem is devising tools that can catch the guilty, while leaving the innocent alone. And that is where the devil arises in the details.


A Los Angeles book collector, Richard Hopp, sent us a copy of a letter (it's actually more like a legal brief) he sent to California Senator Jerry Hill, sponsor of a new round of legislation. Mr. Hopp is particularly concerned about what constitutes a “secondhand dealer.” This is not clearly spelled out. He is concerned about such vendors as garage sales, church and library sales. Will they be ensnared in the licensing, customer tracking, and various other requirements the law would impose on secondhand sellers? Or how about a simple purchaser? Could he be tangled in the definition of a “secondhand seller.”


That last case may sound absurd to you, but Mr. Hopp was himself hauled before a court in Los Angeles in one of the more bizarre of cases involving a city secondhand book dealer code. The city argued successfully in court that Mr. Hopp was an unlicensed book dealer despite their having no evidence that he had ever sold, or attempted to sell, a book. He was a collector who the city determined was a book dealer because he bought books. That conclusion could be enough to strike fear in the heart of every book collector and librarian in Los Angeles, but Mr. Hopp fought city hall and in time he won.


Mr. Hopp conducted his buying in an atypical way for a collector – advertising to buy books and setting up a “buying booth” at shows. The city evidently concluded that someone who bought in this manner must be buying for resale, not for collecting. The problem was that they had absolutely no evidence he ever sold any books, and Mr. Hopp explained that this was the way he filled his collection, giving away or discarding books purchased in bulk he did not want.


Ultimately, Richard Hopp prevailed in court on appeal. The higher court did not focus on the buying and/or selling issue. Instead, it focused on the word “business” in the statute. The court concluded that a business requires some sort of service to the public, and so why he was certainly “buying” books, he was not engaged in the book “business.” Therefore he was not a book dealer.


It's no wonder Richard Hopp would be a bit gun shy about new secondhand dealer legislation, particularly laws such as this that could make book collecting a “criminal profiteering activity.” He suggests making the definition of a secondhand dealer to be “conjunctive and comprehensible and no longer disjunctive and ambiguous.” In other words, for starters, define a secondhand dealer as one who engages in buying and selling used merchandise, not buying or selling it. He concludes, “This proposed change is to protect the collector in his/her hobby, low income person, the disadvantaged, occasional seller, and bargain shopping public so as to no longer classify them as potential criminals. Amendment of the existing codes is needed to achieve their intended purpose, e.g., curtail the sale of stolen property to a 'fence', yet still allow a widow to buy a teapot.”


The problem that Senator Hill and others are trying to fix is a serious one. A readily available market for stolen goods encourages people to steal more. Collectors or buyers can make the situation worse by buying merchandise they have reason to believe is likely to be stolen. Perhaps buyers need to be regulated too, though it is certainly preferable to limit the burdens to those who make a business of trading in used merchandise. We will leave the fashioning of proper legal remedies to the legislators.


However, it is worth noting that this issue never would have arisen had Los Angeles officials applied even the minimum of common sense. They may have suspected that Mr. Hopp was engaged in a secondhand business, but convictions must be based on evidence, not suspicions. Since they had no evidence Mr. Hopp was violating any laws, they tried to twist the law to cover innocent behavior. So now, someone needs to find a way to write needed statutes not only to protect society from the criminal, but to protect the innocent from society, in the form of overreaching law enforcement. No wonder our statutes become such a jumble of incomprehensible legalese.