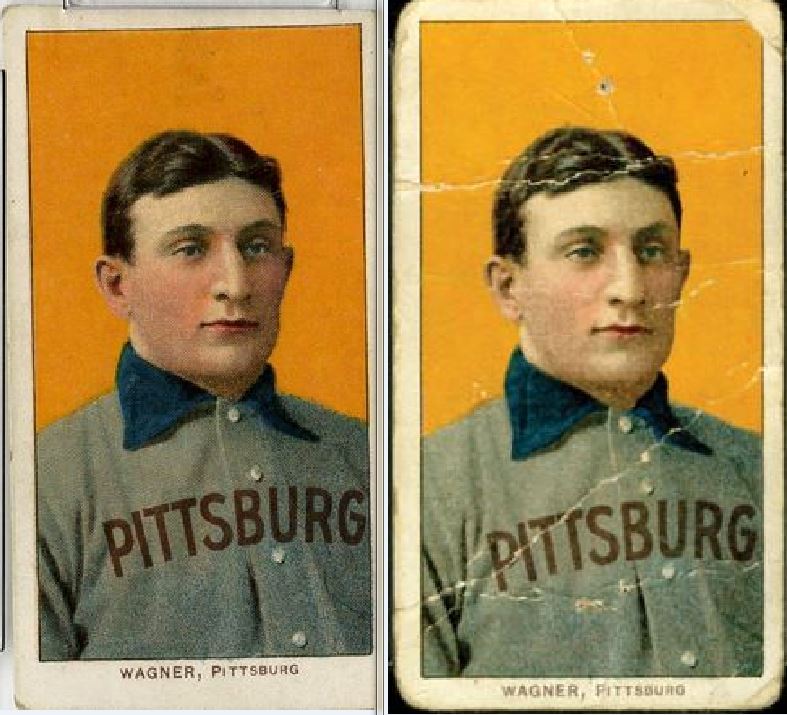 At auction on the Goldin Auctions website in April, a 1909 Honus Wagner baseball card sold for the astounding price of $2,105,770.50. This was not just any Honus Wagner card. While books are graded more vaguely - fine, very good, good, fair, poor, there is a more exacting rating scale for baseball cards. As such, this and one other card have the second highest rating of any known examples. To put this in perspective, the highest rated card sold for $2.8 million a couple of years ago, the sixth highest rated for $1.23 million. Collectors take their baseball cards a lot more seriously than the kids who used to flip them and stick the pack in their pockets. None is taken more seriously than the 1909-1911 American Tobacco Company Honus Wagner.


Johannes Peter “Honus” Wagner began his baseball career in 1897 with the Louisville Colonels. After that club folded, he moved on to the Pittsburgh Pirates, where he remained the rest of his career. If Wagner is not as well known today as Babe Ruth or Ty Cobb, it may have something to do with his playing in Pittsburgh. Those three were the top vote-getters in the first election to the Hall of Fame. Wagner finished behind Cobb but tied with Ruth (pitchers Christy Mathewson and Walter Johnson were the only other initial inductees). He regularly remains the choice of experts as the greatest of all shortstops and one of the greatest to play the game, even if fan polls no longer rate him so high. They don't know Honus.


After his retirement at age 43, exceedingly old for a ballplayer in that era, Wagner served as a coach for the Pirates for many years, the largest part of that time as hitting instructor. The first player to reach 3,000 hits, he knew how to swing a bat. Nevertheless, it is his career as a baseball card that he is best known for today. This card, referred to as the T206 Honus Wagner, was issued in 1909, the year he won his seventh batting title. While a card of Wagner would undoubtedly be collectible under any circumstances considering his prowess on the field, there is something that makes this card of particular interest – rarity. Very few (estimated 200) were issued, with around 50-60 surviving. Most are not in great shape.


There is an explanation for the card's rarity. The American Tobacco Company issued the card without Wagner's permission. He was not pleased. He demanded it be withdrawn and the tobacco company slowly complied. The obvious explanation is that he was unhappy with not being compensated, but advertising was not such a big deal for athletes then and he did not reach an agreement with the company. His granddaughter said that, though a smoker himself, Wagner did not want to encourage children to buy cigarettes. In 1909, baseball cards came with cigarettes rather than bubblegum.


If you missed this auction, it is not too late to pick up a T206 Honus Wagner. Robert Edwards Auctions has one up for sale in an auction that closes May 18. This one won't put you out for nearly so much money. The estimate is a mere $300,000. It is a nice, bright card, but it is not crisp or like new. Someone flipped it a few too many times, or stuck it in his pocket, as it has several creases. The current owner will pay big time for that long ago carelessness. Still, this is a Honus Wagner, and you don't get Honus Wagners for pocket change. Even this one will bring more than Wagner made during his lifetime, at least his lifetime as a baseball player. Some people make more off of Honus' baseball career than he ever did, and they aren't even owners of a baseball team.


While this card is not in as good shape, it comes with a fascinating story behind it, a unique provenance. It was on display at the All Star Cafe in New York City, part of the Charlie Sheen Collection, loaned by the actor. Some employees devised a plan to steal the card and replace it with a copy. The theft worked as the fake looked real enough from behind glass. The thieves sold the card to a memorabilia dealer, claiming it was found in a grandfather's attic. However, they did not leave well enough alone. A second theft resulted in a broken display case, which in turn led to the realization that the Wagner card had been replaced with a fake. Police tracked down the thieves and the card was recovered. Hopefully, other difficult issues in Charlie Sheen's life will also turn out so well.