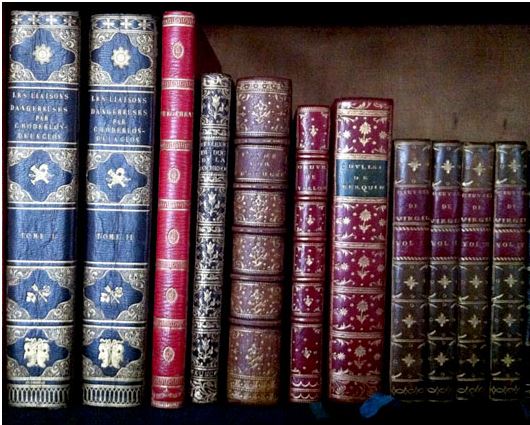 Some of Mr. Wolfi's collection.

Reason the card, but passion is the gale.

Alexander Pope, An Essay on Man


Old books collectors are not so many, but they do exist. Mr. Wolfi is one of them. He lives in the heart of Paris and he has been tracking down books for his pleasure for more than 20 years. Almost from the start he decided to specialize in... 18th century full morocco bindings! And his bookshelf sure looks good. Let’s take a closer look at it.


“I started to buy old books 20 years ago, at the small Brassens Market in Paris,” Mr Wolfi remembers. “I bought a copy of La Bruyère’s Les Caractères for my wife’s birthday. It had a modest binding and it cost 300 francs (roughly 45 euros). I thought it was quite a fair price for a 18th century book.” As any beginner, Mr. Wolfi made some senseless purchases for a while, but as a well-advised – and not wealthy – man, he soon realized he’d rather buy fewer books and concentrate on exceptional ones. Up till today, he has remained faithful to this philosophy, and he buys a maximum of 10 or 12 books a year. As a matter of fact, his collection does not exceed a hundred carefully selected titles. “An ordinary book is always hard to sell back”, he says. Exception, as far as binding is concerned, means “full morocco”. The goat leather is indeed more resistant than veal, and perfectly contrasts gildings. But books are not mere objects, they are the embodiment of the Word. “I always try to combine the text, the binding, the condition and the provenance”, confesses our cunning collector. Religious books were often bound in morocco, but Mr. Wolfi does not care about Bourdalou’s sermons, for example – no matter the binding. He sticks to literature and the writings of the French philosophers from the 18th century.


“We know that the Comtesse Du Barry had 1,000 books bound in full morocco at once, and that it cost her the price of a beautiful dress - which sounds quite fair.” An ordinary full morocco binding would roughly double the price of a book. Elaborated ones would multiply it. It is still the case today...