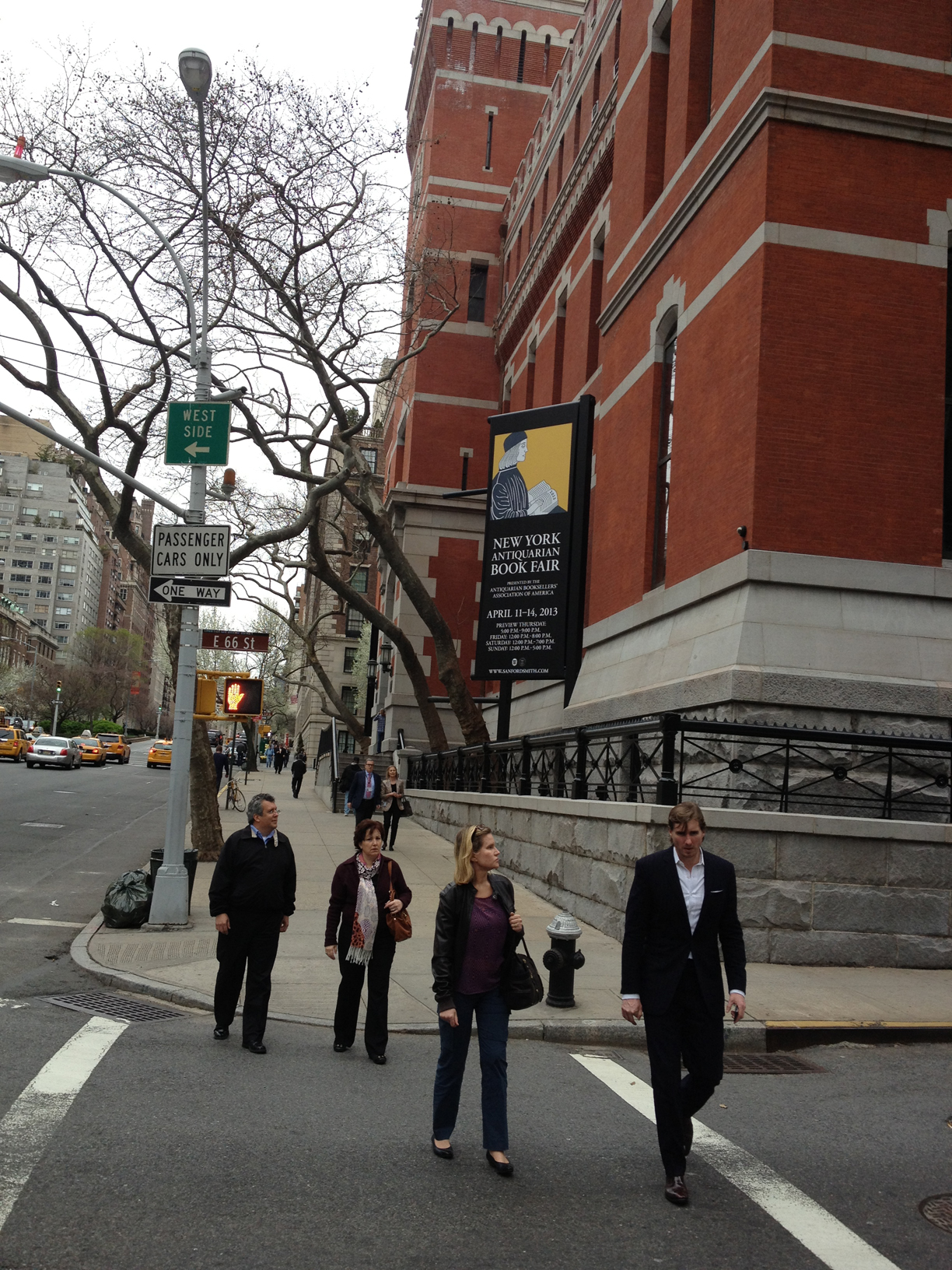 The street's were empty, the show was full

The New York Antiquarian Book Fair is come and gone, the confetti now swept up and the wine glasses washed and back on the shelf.  This year the glass half full guys won out and the glass half empty crowd sent packing.  Not everyone did well but many did and most saw enough success to feel the ABAA-Sanford Smith show partnership was yielding substantial returns.  This year the traffic was strong and the audience ebullient.  According to Catherine Zubkow who managed the fair, “attendance was north of 5,000.”  More importantly exhibitors were happy and suggesting they’ll be back in 2014.  Lorne Baer, the Virginia dealer whose focus is social movements and counter culture, had an exceptional fair.  Collectors are collecting what they have experienced and dealers reflecting this in the material they bring to shows.

Book selling it turns out is not quite what the term implies at least in the rare book trade.  Ten years ago the field was composed of sectors within the category – books, manuscripts, maps, and ephemera and all these sectors continue today.  But as the recent ABAA fair in New York demonstrated dealer hopes and their emphases have shifted to the absolutely unique.   What buyers want is the special and this is what dealers brought and by all accounts sold.

The handwriting has been on the wall for years.  Separate manuscript and ephemera fairs have developed and continue to expand while the book fair circuit has been culled.  Collectors and institutions have always wanted what’s special.  At this fair it was simply clearer that the field has shifted and is replacing some of the weakness in less expensive rare books with strength in the unique and unusual – often signed copies and manuscripts.  It’s logical and encouraging.

This is not to suggest that the printed word has gone AWOL   Booths had plenty of books, in fact they were in the clear majority but the emphasis, when dealers had unique material, was for the folks behind the counter to suggest those items get a careful look.  The emphasis was on the unique and I suspect the most asked question "what do you have that’s special?"

This makes sense for several reasons.

Just as collectors are keying on unique material so too dealers are shifting their ideas of what’s saleable.  The conventional wisdom is that the unique is collectable and the common, described as two more copies than there are buyers for them, is not.  It’s an over simplification but also often true.  Institutions and collectors are coming to the great fairs looking for the unusual and this fair suggests to me dealers increasingly reflecting this.

From the Thursday evening preview and cocktail party on into the weekend traffic was strong and sales as always a matter of luck – the kismet of the right item, the right buyer and the right price.  This time around the magic was in the air.

Per usual more than 200 dealers participated including a substantial contingent from Europe looking to escape their threadbare economies for a few days in the city that never sleeps [alone].  Hopefully they found what they came for.

For years it has seemed that for dealers there was time to dawdle, to watch and wait for an answer to the question - is this an economic downturn certain to be followed by recovery or, have we woken up to a new world?  With the field now in noticeable transition and a tacit agreement emerging between buyers and sellers that is redefining their relationship best summed up this way; “what we can buy on line we will and what we can’t we’ll buy from dealers.”

So the code word going forward is what the secret password was for the fair just completed:  special.  Show me special.  Do that and the crowds will hold up and the field return to good order.

As for what was until a few years ago the field’s bread and butter, the stock in trade rare book, such material will continue to find an audience but the price will be the subject of intense discussion.  The web and databases such as the AED, available from phones, iPads and computers provide instant valuation and rarity calculations that are too accessible to ignore so increasingly dealers aren’t ignoring them and the frank discussions that then ensue are setting the table for serious collections.

After the fair I spoke with Howard of B. &  L. Rootenberg about his recent experience and he agreed that manuscripts and unique copies have become the order of the day.  He then mentioned a Schuyler family manuscript account book he owns from the early 19th century that's both a good fit with my collection and an example of what book selling is becoming.   And I'm interested.

So it was a very good fair.  When the fair opened it was raining but inside sun and blue skies and it stayed that way all weekend.  Mark Twain, as if speaking for the trade, had it right, "the reports . . ."